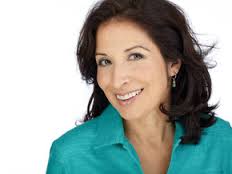 Q: You were such a fixture on the evening and morning news for so many years. What has life been like since you stepped away from it for a bit?
A: I think I masked the transition of getting out of the news business by creating another transition: the physical move from one state to another. I indulged in the distraction of readying a house to sell, deciding what to keep, what to give away, choosing a new home, fixing it up, etc. But eventually, the boxes are unpacked, the new place is decorated and you find yourself without a task in front of you. The to-do list is done. That's when it hit me that I don't have a job anymore. That might sound more negative than I mean it to. Life post-news has been rewarding in surprising ways.

Q: Are there people who will be surprised to learn of your heritage?
A: Probably. Kauffman was my father's name. His side was German and Dutch. My mother was Native American, from the Nez Perce Tribe of Idaho.

Q: You are so candid and vulnerable in the book. Did you worry about opening up so much of yourself and your relationships to the public?
A: Well, even though Falling Into Place opens with the end of a marriage, I don't see the book as an objective assessment of a relationship. It is clearly my perspective on my experience, and I think the same holds true for the way I describe events in childhood. We are seeing it all through only one set of eyes, mine. And to answer the first part of your question, yes, it's a bit unnerving now that the book is coming out. It's one thing to sit alone at your computer, typing your heart out...quite another when all that typing is actually a book, with your innermost feelings right there for any stranger to read. It's like a therapy session is about to be broadcast over gigantic speakers and there's no way to turn down the volume. Part of me wants to hide and yet a greater side of me is aware that we are called to tell our stories. It is only when we open up that we are able to connect with another human being.

Q: What is your life in Seattle like?
A: It is full in a way I never expected it could be. I'm in several small groups. (People of faith will know what I'm talking about. Everyone else will be wondering 'what's a small group'? Read my book... you'll get it.) In other areas, let's see. I love to garden. And of course, there is writing, which I do when I'm disciplined and when I'm not so disciplined, I paint. Oil painting is a new found joy.

Q: Jane Fonda, Bob Dylan, Alice Cooper and many other public figures have experienced conversion experiences similar to yours-encounters with God. Do you see similarities in their stories that you relate to?
A: Wow. I don't even know their stories. It's funny, when I had my conversion experience I thought that must be the way it is for everyone... that every Christian in the world must have felt a touch upon the head.

Q: Did you find God or did God find you?
A: God didn't have to find me... He knew where I was all the time. I was the hungry girl, trying to control her world, scrambling to get somewhere and be someone. Later, the woman trying to be liked, always on guard, never at rest. It was only when I was so broken in spirit that I could no longer even pretend to be in control... that I looked upward. God? Are you real?

Q: What role did your Grandmother play in your spiritual journey?
A: She radiated peace.

Q: What things did you have to change as a result of meeting Him?
A: Oh, how about everything and I do mean every single thing. A while back, I was talking to my grandson (You see, there's an example. The former me would not have admitted she's old enough to have a grandchild!) and he asked if it's difficult to become a Christian. I said, "No, it's very easy. You just have to ask Jesus to come into your heart." He said, "Really? I thought it would be more tough, like you had to go on a quest or something." Well, out of the mouth of babes. I've learned it is a tough and it is a quest. The quest is to try to live out the teachings of Jesus. Forgive? Love your enemies? Be a servant? All of that is tough and it is an everyday quest. 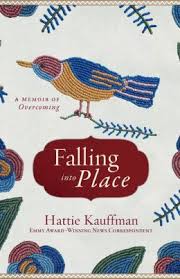 Q: Do you wish you had encountered Him earlier in life?
A; Yes, very much so.

Q: What kept it from happening?
A: My pride and maybe some anger from my teenage years. Again, if you read Falling Into Place, you'll know to what I'm referring.

Q: What would the old Hattie Kaufman have thought if she had read the book? How would she have reviewed it or reported on it?
A: She would be aghast. She would be embarrassed. She would try to pretend someone else wrote it... and not her. Now, if indeed someone else had written it, and the old Hattie Kauffman happened to read it, her denial would be such that she probably wouldn't recognize herself. If she had to review it, I hope she wouldn't put her own insecurities into her critique of the book. At night, alone, she'd probably turn on the bedside lamp and read some more.

Q: Why does God seem to draw some people to Himself and not others? Ia that fair? Is He fair?
A: God gave us choice. Who can argue against the fairness in that?

Q: Is there anything you miss about your old life?
A: Being in the news is like having your hand on the pulse of the world. I miss the immediacy of it but I don't miss the tension. There is something called a 'news buzz'. It's the high you get from the adrenalin of being on a big breaking story. Lots of people, though they wont admit it, love the buzz. I did. Start with the big headline, add the time pressure to be first on the air, to get the key interviews, to look good, sound good, ad lib, stretch if you have to or wrap it up quick, and do it all in front of a live camera without flubbing a word .... it's pure adrenaline. But is that what I miss? No. I miss writing a good script. That might sound wrong... a script is for Hollywood, right? But we actually called our news stories 'scripts' in that there was a certain structure to the sound bites from the people we interviewed, intercut with lines of voice track recorded by the correspondent, all leading to a punchy ending or a poignant ending. The feeling that I'd written a really good script was the best part of my job.

Q: What is the hardest thing about submitting to God?
A: I find the everyday little submissions the hardest.

Q: Tell me about your husband?
A: I have remarried, thank you for asking. We met through church in a scene that seems right out of a screenplay. I'd kind of had my eye on him but we hadn't engaged in any real conversation. One Sunday, I notice him walk in a few minutes after the service had begun. He takes a seat two rows down and to the left of me. Just then, the pastor says "Take out your pew Bible and turn to page..." Well, because I still had my eye on where this tall, handsome man was taking his seat I noticed that there was no Bible there for him so I grabbed an extra one that was next to me and tapped the person in front of me asking her to pass the Bible down to the next row. The gentleman in front of her accepted the Bible but didn't know what he was supposed to do with it. She pointed him back to me and I gestured 'hand it to the left'... and so on, and so on, all down the line. I'm miming, signaling, all in silence trying not to disturb the sermon. After the Bible has passed through a dozen hands, it eventually hits its target, who gives a puzzled look at the one who handed it to him.That guy shrugs and points back at whoever handed him the Bible, who points to the person on the right, who points to the person behind him, etc, until the pointing reaches me and at last our eyes meet. I give a little wave and smile, oddly free of embarrassment.

Q: Will you be getting back into the news business?
A: I doubt it. My twitter name is "Hatsfree" because I am finally free to be me. When you're a reporter you're not supposed to express viewpoints on issues. When I was in journalism school, we were taught that we must be objective, unbiased. (Hard to believe in these times of some networks reporting the same story in such completely different slants that you hardly recognize it as the same topic.) So, it's been freeing to say outlandish things like: I am a Christian.

Q: What do you love about reporting?
A: Being there... witnessing history. But the truth is those are rare times in reporting.

Q: What advice would you give to an aspiring journalist?
A: Be curious. And don't be afraid to break away from the crowd. These days so much of reporting is simply an echo chamber. Plug your ears to block out those echoes and then, go ask the hard questions... or narrow it down to the simplest question: Howcome?