If you are ever visiting San Francisco and have an extra day for adventure, I highly recommend jumping into the car and heading to Silicon Valley. The drive is beautiful and it is a worthwhile experience to see some of the big businesses and small treasures of the tech world while getting a feel for how low-key and casual Silicon Valley lifestyle is. While it is the epicenter of some of the nation's greatest wealth, Silicon Valley is not as flashy as you might expect. The locals tend to be outdoorsy and athletic. It is not unusual for business to be conducted over a workout or a hike. The entrepreneurial culture is interesting to experience first hand.

Let's start with the term "Silicon Valley", a nickname for the South Bay portion of the San Francisco Bay Area in northern California, branded in 1970 by California entrepreneur Ralph Vaerst. "Silicon" referred to the silicon chip manufacturers who dominated the region, and "Valley" referred to the Santa Clara Valley. We are going to head that way to check out the short list of places to see in a day trip to the area.

Beginning with.... the landmark that highlights where the Silicon Valley tech craze began... 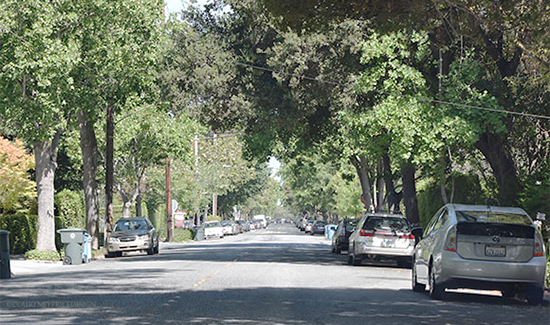 In Palo Alto, about an hour south of San Francisco, we'll stop off in a nice, tree-lined, shady neighborhood. Our destination is a garage. Not just any garage... The HP Garage. 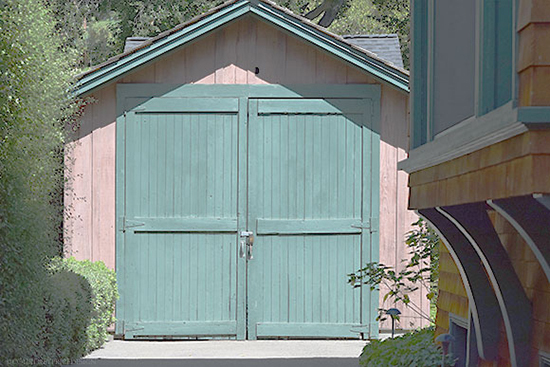 In 1938, Bill Hewlett and Dave Packard developed their first product out of this garage, which is now California Historic Landmark # 976. If you say "the garage", locals will know which garage you speak of. The back story is cool, see more detail about this landmark here.

While you are here in Palo Alto, you are near Stanford University. It is well worth the drive to see this campus. I was actually surprised by the architecture and the overall look, which is definitely geared toward engineering and technology. On campus is the B. Gerald Cantor Rodin Sculpture Garden, with a re-creation of the Gates of Hell. The surrounding sculptures are larger than life details of the figures featured in the Gates of Hell masterpiece. 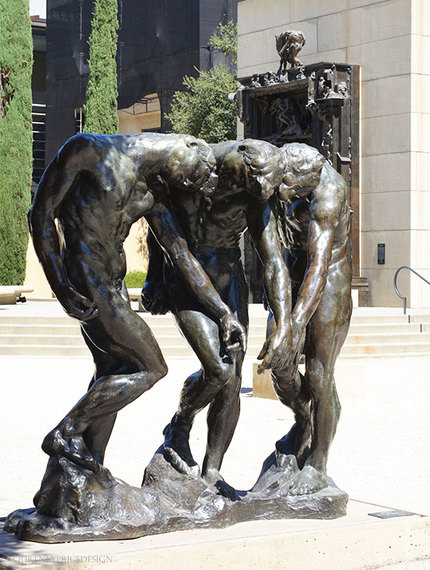 Make time for lunch, because the next stop is a destination worth checking out, for more than just its crazy decor. 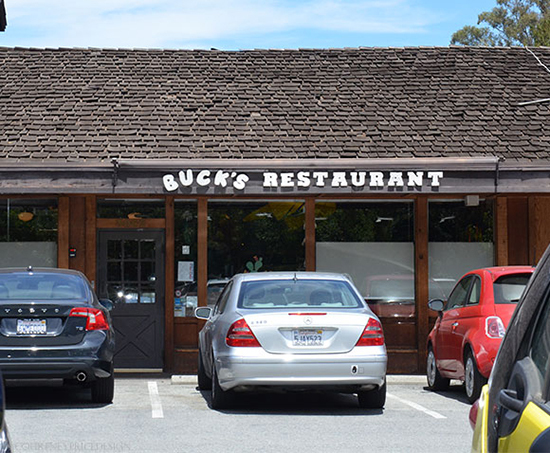 BUCKS. Bucks is an experience with a lot of backstory, located in a small town within San Mateo County named Woodside. While it might appear that there really isn't too much to see in Woodside, this town is home to numerous Silicon Valley jillionares. Woodside also surprisingly has quite a few TV and movie credits, including The Game, Lolita, Harold and Maude, and The Wedding Planner. It is a short drive from the Palo Alto area, and a quick commute from Sand Hill Drive. 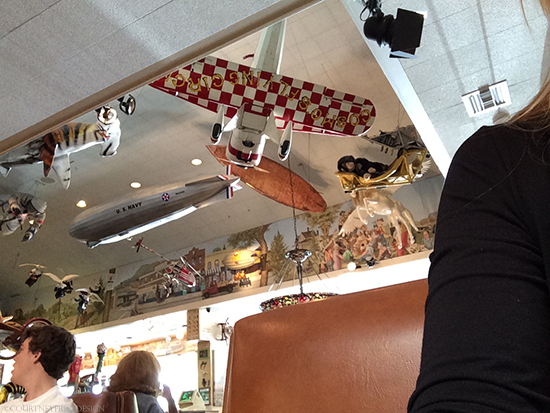 The decor is an explosion of kitsch -- model airplanes fly above, a human-scale Statue of Liberty holds an ice cream cone torch, touristy trinkets from all over the world jam this space, along with documented history of famous Bucks visitors and historical Bucks moments that surround every inch of the booth-filled casual atmosphere. The owner, Jamis MacNiven, proudly takes full credit for the upbeat decor. 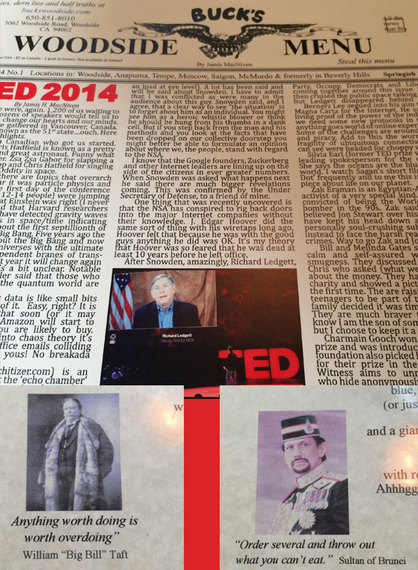 His sense of humor extends to the extensive menu, which also serves as a personal newsletter with amusing "quotes" inserted throughout.

If you want to people watch, this is the place to see VCs, entrepreneurs, the Silicon Valley who's-who. It would not be unlikely to see Elon Musk or other noteworthy faces dining at Bucks. Owner MacNiven encourages his entrepreneurial clientele to stay as long as they like, providing extra power outlets and cell phone chargers. Rumor has it that Bucks was the first restaurant ever to provide wi-fi. Netscape and Hotmail were launched here, Tesla founded here, Paypal funded here, and Yahoo turned down during a meeting at Bucks. 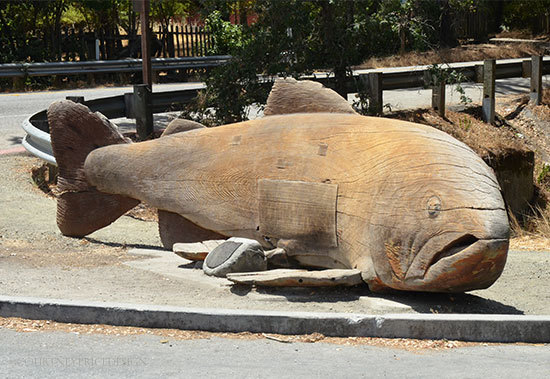 This giant wooden whale sits outside of Bucks. Members of the press lurk behind the whale as they wait for famous entrepreneurs to leave the restaurant. 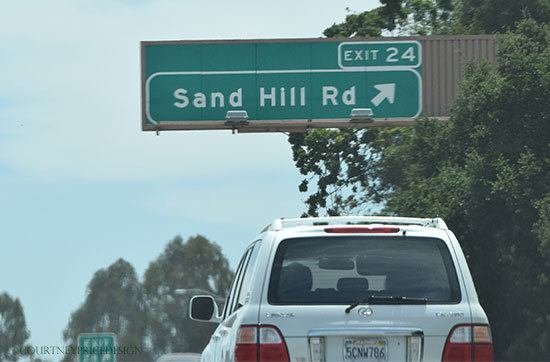 SAND HILL ROAD. The land of Venture Capital. This highly concentrated VC area is a symbol of private equity in the US.-

The big names of social media technology are worth a drive by. But you won't be able to do much more than drive by and look at them unless you have a meeting set up. Or if you know anybody who works at these next places, beg them for a tour. 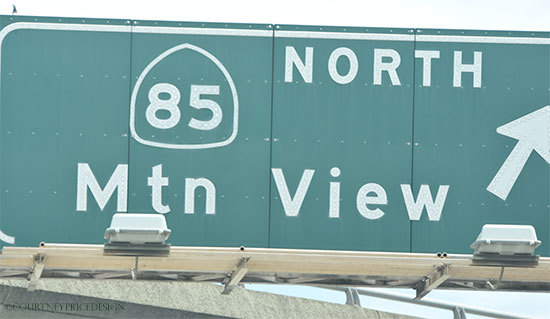 Named for its views of the Santa Cruz Mountains, Mountain View is home to many high technology companies, including Google, Mozilla Foundation, Symantec and Intuit.

GOOGLE. At Google, the parking lot you see will not necessarily reflect the level of money being made inside. Instead you will encounter a sea of hybrid, fuel-efficient and electric cars in the parking lots. This is typical of Silicon Valley -- not even remotely as flashy as you might assume. Google even provides air-conditioned wi-fi enabled busses for commuter San Francisco employees. Pets are allowed at work. The food is phenomenal. Employees live in the future, beta testing the new technologies long before the rest of us ever hear about them. The perks are unheard of, including death benefit of half of the googler's salary to spouse for the next ten years, with additional compensation for each child. Google jobs are the most sought after for a reason. Unfortunately I can not show you the inside of Mountain View Google, but if you are curious to see how creative Google gets with their interior design, come tour the New York office here.

FACEBOOK. Again, must have an appointment if you want to go inside. These offices are vast and open-desk style, geared toward encouraging creativity (like Google). They are also known for great food, have an eco-friendly parking lot equipped to recharge electric cars, offer flexible work hours, 21 days PTO, and the flexibility for employees to work wherever they can make the biggest impact. They have the reputation for having a very "open" work environment -- Facebook was even voted the #1 best place to work. The summer intern salaries are unbelievable- ranging north or south of $6,000/mo, as reported by interns online. Wow. 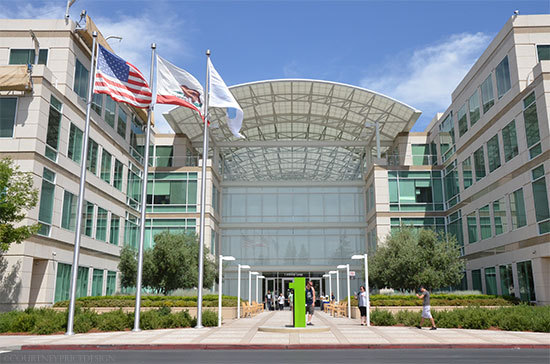 APPLE. Apple has a beautiful campus. This huge building surrounds a grassy quad where employees can get fresh air or eat in the outdoor cafe areas. But again, if you don't have an appointment, it is well patrolled and the odds are slim that you will get past the front door. Lots of light and open spaces. There IS a store, but don't get too excited... while it is the only Apple store to sell Apple logo items of clothing, that is about it, definitely not enough reason to go- no deals other than discounted software, very few electronics -- not like a regular retail apple store. I was expecting something like the Microsoft Campus Store... The culture at Apple is different from the previous two- the food costs money, as does the gym, all in the name of your stock value. The employees are known for commitment and loyalty. Gotta love that. 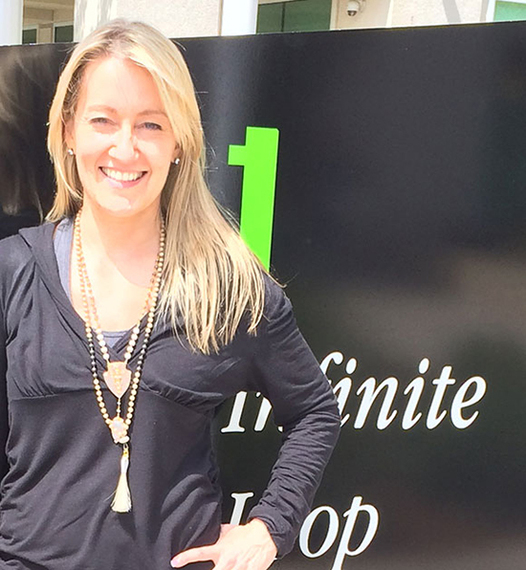 An apple selfie because I love Apple. You know how all apple devices arrive set on Cuppertino time, with 1 Infinte Loop programmed into them? Well here we are, at 1 infinite loop. And by the way, it was fun to ask Siri for directions to Apple. 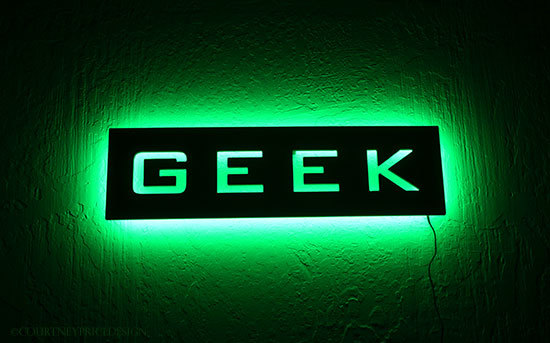 This next company is an interesting one... again, not one to just show up at because they are busy working. This one is the largest non funded companies in Silicon Valley, with offices that visually define the tech culture so well that I have to share: 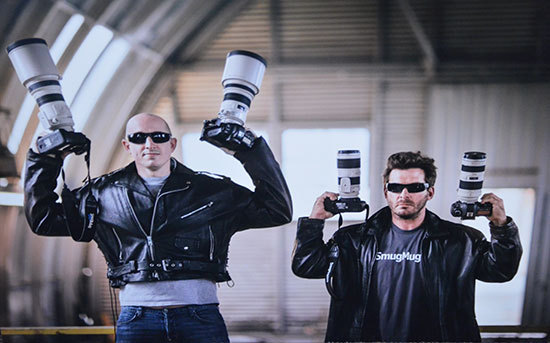 SMUGMUG. SmugMug is now the largest independent photo sharing site in the world. They have been boot-strapped for 12 years and never taken outside funding. Impressive.

Personally I think this is the dream place to work. The 140 employees appear to have the most fun office on the planet. The food is said to be better than any previously mentioned place - they have a health oriented chef on staff. 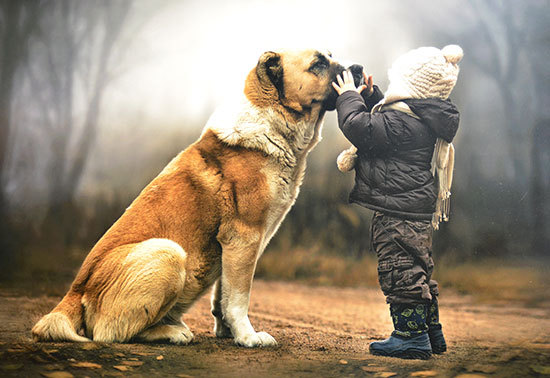 Since the nature of the business is PHOTO sharing, you can well imagine that the office decor is chock full of the coolest photos you have ever seen, in the most innovative formats- like murals, giant lightbox photos, photo rugs, skylight photos,you name it. Examples of fine customer photography line every inch of the walls (with the photographers' enthusiastic permission).

SmugMug has a gym with trainer on site. Employees get a budget to creatively personalize their offices. There is an inner office go cart area. Dogs are allowed and hours can be flexible. Are we all applying to work there now?! 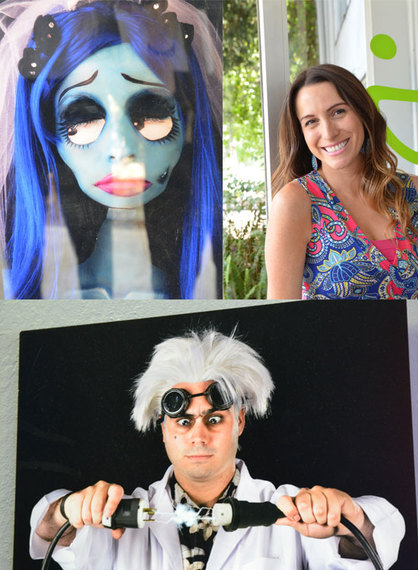 For new employees, the passage of initiation involves face painting and photograph as the movie character of his/her choice, to be hung in the entry stairwell with all other employees. In the photo above, believe it or not but the top two images are of the same person, with and without the makeup. Amazing, isn't it? SmugMug employees take creativity very seriously, so as you might imagine, Halloween is a big day in their office. 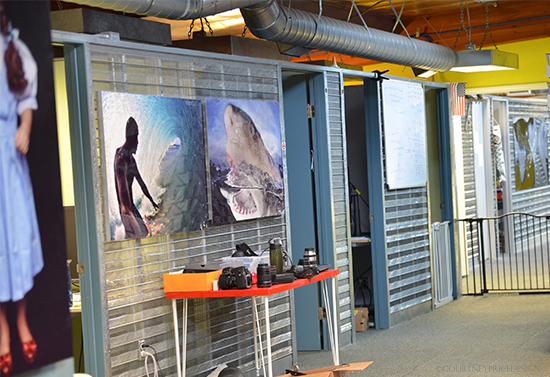 Impressive cameras, lenses and photography equipment sit around on tables throughout the expansive office -- decor themes change as you walk through and impressive oversized photos cover every surface. Humor surrounds, the employees are relaxed, friendly, and look like they are having fun. Their employee turnover rate is very low, as you might imagine. 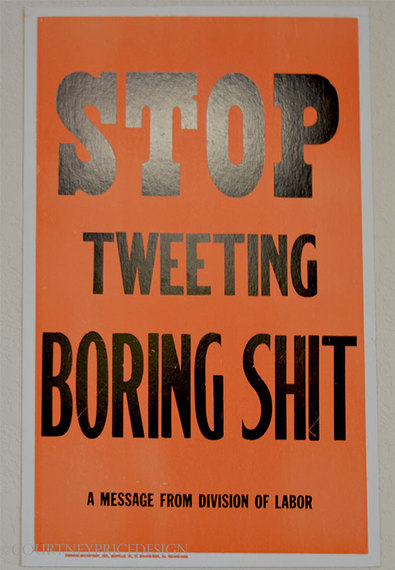 What might strike you about the Silicon Valley area is how understated, creative and healthy the entrepreneurial culture is. One might assume that an area that creates massive wealth would be flashy , and that's not the case- the vibe is more relaxed and down to earth. The temperatures of Silicon Valley are agreeable and conducive to the noticeable link between health, creativity and success. 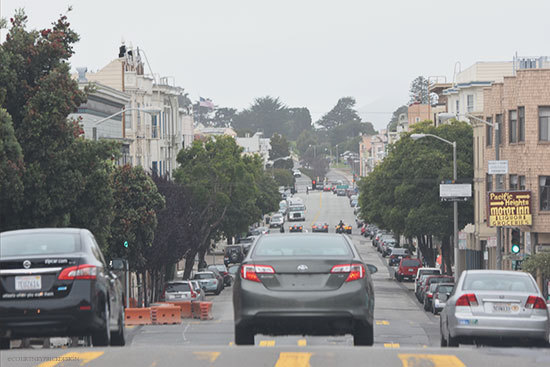 So next time you are in the Bay area, a quick trip to Silicon Valley makes for a great day or partial-day adventure that I highly recommend for all technology fans and Social Media users. To see more photos of the bay area, follow my Instagram account and get San Francisco restaurant suggestions on my site. And when you go to Silicon Valley, tag me on your instagram photos -- I would love to see where you go. Happy travels!

Voting Made Easy
Register to vote and apply for an absentee ballot today
Register now
More:
appletechnologybucksPalo Altophoto sharing
Newsletter Sign Up
An essential daily guide to achieving the good life
Subscribe to our lifestyle email.
Successfully Subscribed!
Realness delivered to your inbox