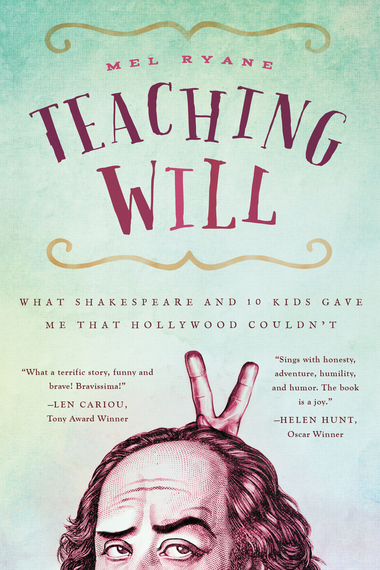 I can't even write about Mel Ryane's memoir, Teaching Will: What Shakespeare and 10 Kids Gave Me That Hollywood Couldn't (Familius), without falling apart laughing. This hilarious account of a former actress naively volunteering to teach Shakespeare to third-, fourth-, and fifth-graders at a Los Angeles public school is a delicious read for readers of all stripes.Teaching Will is an obvious match for me since my passion is education, but in reading this book I can see it's a much bigger shoe that fits all different kinds of feet. Shakespeare lovers, naturally, will eat it up. Teachers will revel in Ryane's refreshing, unvarnished truth-telling; every teacher will recognize the first-year classroom chaos, battles for power, and onslaught of fear and doubt.

Volunteers will identify with Ryane's story of working for free and the expectations and pressure that come with such a choice. Parents may very well find it eye-popping when Ryane reveals what can actually happen in a schoolroom. Actors and theatre professionals will definitely get a kick out of Teaching Will; Ryane intertwines her teaching tales with her personal story of her acting career and the bittersweet decision to leave it behind.

Ryane weaves her stories in and out of the classroom with such deftness that I found myself moved to tears by one sentence and laughing out loud at the next. Which brings me to the widest audience for this book: Anyone who's ever had a dream and had to give it up and reinvent themselves will love Teaching Will.

Ryane's memoir begins with a flyer dropped on her doorstep. Parents of children at a struggling local elementary school are asking for help. Ryane heeds the call. She volunteers as a reading mentor, then blurts out to the school's principal her idea of forming "The Shakespeare Club." How much, she is asked. "No charge," she answers.

So she is sent flying off the high board into the deep end of the education pool. "Sink or swim" is an ongoing theme, both for her and the children who join the Shakespeare Club. Ryane expertly draws these pipsqueak characters with humor and compassion, recognizing that they are children fighting wars at home as well as on the schoolyard. Ryane correctly deduces that they will relate Shakespeare's overarching themes of power, revenge and love, but the journey toward such resonance is the crux of this memoir.

Any parent, teacher or coach will relate to the hair-pulling moments in Teaching Will. For some, it's surely difficult to cop to desperate feelings like these, but Ryane has no such qualms. After a particularly nasty tussle with a recalcitrant student, she writes, "If teachers drink, I now know why. Kids aren't cute." And we turn the page to find out what will happen next and how (if?) she will survive.

From the opening salvo, it's easy to see Ryane is an idealist with a big idea and no idea, both in equal measure. Perhaps if she could know what lies ahead as she struggles to steer her little students toward a rudimentary production of A Midsummer Night's Dream, Ryane would never have attempted this feat. But her ignorance eventually is the kids' gain, as well as the audience's.

The layout and structure of the book are a joy. Ryane's chapter titles are clever and fun, and Shakespeare enthusiasts will geek out over Elizabethan touches such as the memoir's very own dramatis personae as well as each chapter beginning with an appropriate Shakespearean quote. For Chapter I, in which Ryane bombs in front of her group of rowdy kids, is prefaced with "Hath homely age th' alluring beauty took From my poor cheek?... / Are my discourses dull? Barren my wit?" from The Comedy of Errors. It's smart stuff.

Dear journal, My dad cut my mom's head off. I am so mad about that. I am so
angry. They say I have to get married but I am never going to marry anyone because a man could do that to you. Queen Elizabeth

But it's not all laughs and giggles. Ryane expresses bewilderment throughout the book at why the kids don't understand what she's trying to do, why they aren't grateful (as they turn her carefully prepared snacks into a food fight), why they don't behave, why they don't listen, why they don't do.

The kids finally get it, in the nick of time, but Ryane herself has the most cathartic alteration when she realizes that out of the heartbreaking end of her acting career has risen purpose, creativity and meaning. Her appreciation for answering the call and embracing the children she comes to love and respect is palpable.

Here's my recommendation: Read Teaching Will. I promise you'll have a good time -- and you might even be inspired by an urge to try something you've never attempted.