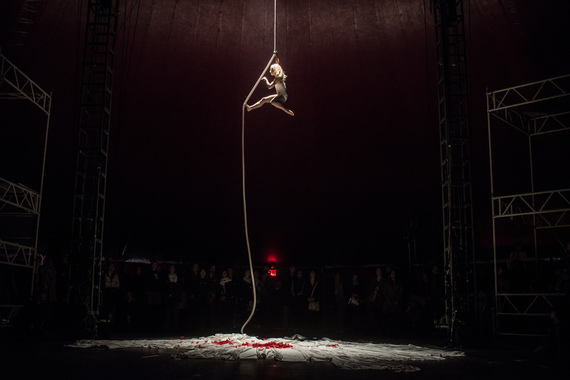 I have always loved watching circus performance for the same reason I love watching dance. Both of these forms are at their best when they remind us of the astounding capabilities of the human body, and how beautiful those abilities can be. While watching NoFit State Circus's performance Bianco in a large tent outside of St. Ann's Warehouse, I had many moments of pure awe at what these performers can do. This Welsh company has a very well-trained group of performers and a fun aesthetic, which makes for an enjoyable evening. Overall, this was a very entertaining experience and I think a lot of people can and will enjoy it, though it's also possible the audience will be its own worst enemy here.

Entering the large saucer-like tent, I was greeted by the smell of popcorn and the sight of a large structure of scaffolding in the center of the space. I immediately wondered how the "promenade" style audience "immersive" experience was going to occur. There were performers walking through the audience saying hello, but not in a way that seemed like I should follow them or attempt to interact further. Performers moved around throughout the performance, executing an impressive number of scenic transformations while moving audience members into appropriate places to see the action.

One of the greatest strengths of this piece is the somewhat Brechtian way that the performers participate in not only the scene changes and the rigging set-ups, but also how they use other performers' bodies as counterweights. For example, if a performer is doing a dance with a hoop that rises and falls, that hoop is attached via pulley to another performer visibly climbing one of the supporting scaffolding and letting go in order to move the hoop up and down. Brecht was famous for many things, but one of his ideas was that the audience should see the mechanisms of the performance. The makers of Bianco obviously agree, and they seem to know that this only adds to the audience's experience of wonder.

This was really astonishing to watch, but the description above is one of the reasons I disagree that this show was immersive. That term gets bandied about a lot these days, but having an audience stand and move is nontraditional but doesn't quite justify its usage. Immersive theatre simulates all of your senses by surrounding you by a specific environment, generally with the goal of making you feel "immersed" in another time and/or place. The second part of an immersive experience is that ways you choose to interact with the performers and environment create a unique experience of the show.

Though the tent was a change of scenery, it was not an environment created to be engaged with in different ways. Aside from where you chose to look at various moments, everyone experienced the same show in terms of the number of scenes witnessed and the order in which they occured. This was just theatre in the round with a few shifts of perspective. Additionally, the audience interaction in Bianco consists of being herded around the space. This didn't bother me at first (though you should definitely wear comfortable shoes), but began to remind me a bit of my subway commute to the show.

One of the reasons I'm being a stickler about these definitions is that I think labeling the show this way does it a disservice. There are so many wonderful things to be gained from simply standing under a big tent and watching someone do a flip on a tightrope (François Bouvier) or a gravity-defying silks routine (Danilo Pacheco) or unbelievable handstands on a variety of surfaces (Anne-fay Johnston) performed just a few feet in front of you. I found myself wearing the smile of pure childhood wonder as the entire cast of Bianco showed off their impressive skills.

If a show is entertaining, what's the problem with misrepresenting it on advertising material? Well, you end up with a crowd that doesn't fully know what they're getting into. I rarely spend any time in a review talking about an audience, but there is not way to avoid it in this particular situation. People kept pushing their way to the front for no reason. Most of the show is performed above eye level, so you don't have to be right in the front at all. And worse, I stopped counting how many people had their cell phones out both taking pictures and texting. If your phone is more entertaining to you than human bodies performing amazing feats right in front of your eyes, please stay home or at least avoid going to live performances. I only saw one person be reprimanded for having a phone out, but the real way to solve this problem is to eject audience members that do this and not allow them to reenter. Let me be clear: having a cell phone out while people are performing complex moves is unbelievably dangerous. Lights can distract and flashes can blind performers just long enough for them to make mistakes that could injure them. 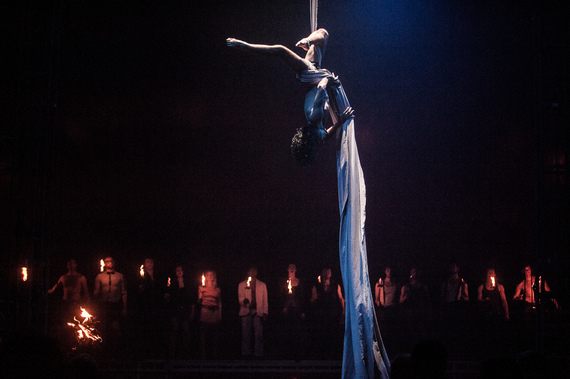 Now, the people wanting to take pictures were reacting to the beautiful images that NoFit has created in Bianco. I understand being moved by the beauty of those moments, but the challenge in live performance is to live in the present moment. This is particularly important in Bianco, as you might be required to move out of the way for a scene change when one scene ends. This show does not have a narrative, but is, as director Firenza Guidi describes it, "Raw and raucous, Bianco is a traveling world: a circus, a village, a community on the go. There is no map. No compass. There is no end and there is no beginning. There is only the passion, the messiness and the infectiousness of life. A constant attack on the normal, as ordinary people perform extraordinary things." I would agree with that assessment. There is no narrative, but it doesn't need one. I will say that I felt that the first act had more momentum than the second, but there are awesome moments, literally moments that produce awe, all over Bianco.

So put on some comfortable shoes, put your phone away, and bring your sense of wonder to this Cardiff-based company's Wales of tales of human strength and beauty. NoFit's run of Bianco will play in the tent outside of St. Ann's Warehouse in Brooklyn until May 29th. Get your tickets here.