"Andrey, this is our best proposal to date. The President has dedicated himself to the image of peacemaker. He wants to do some lasting work. You should take advantage of that."

Andrey Botvinnik is the 57-year-old career Soviet diplomat who is being implored by a 45-year-old American arms-reduction negotiator. The American is trying to convince the Soviet diplomat to relay (approvingly) the latest U. S. proposal to Andrey's superiors in Moscow. The discussions and beseechings take place in "a pleasant woods on the outskirts of Geneva." The discussions, the American's beseechings, and Soviet diplomat's sardonic responses are the nuclear core of Lee Blessing's 1988 stage play A Walk in the Woods.

The play yields no explosive moments. The Soviet diplomat has a sadder-but-wiser (even rueful) take regarding talks meant to project the veneer of defusing East-West tensions, and thereby seem to reduce the risks of nuclear war: "Formality is simply anger with its hair combed."

Andrey has the best lines, countering the American's earnestness with wry realities and long-held suspicions.

Matters of Trust, in a "no-try" zone?

The following cobbled-together exchanges from Lee Blessing's play may seem enviable and estimable when compared to the words that have presumably been exchanged between President Obama and Vladimir Putin; between U.S. State Department officials and their Russian counterparts; between Russian military higher-ups and U.S. military personnel. The play's exchanges may also have us reflect on the terms of the recent deal that supposedly restricts Iran's nuclear program in exchange for sanctions relief (the so-called "Joint Comprehensive Plan of Action"):

American negotiator: "Andrey, man has other potentials - not just destructiveness. Man has the potential to become a whole new animal. One that trusts instead of fears... one that finds the way to live, because life has become for him - has finally become - a sacred thing."

Andrey: "Only a child could believe this."

American negotiator: "Andrey, all through history, man has been able to love destruction and be excited by violence - because no matter what stupid, gaping terror he created, it was always survivable. But no more. If we fail now, history itself will disappear.... There will be no here.... Idealism is no longer a choice for mankind. It's a necessity.... We have to feed whatever tiny inclination we have toward each other...."

The ardent American eventually tries a more grounded approach to counter Andrey's cynicism: Urgently, he insists that "every treaty is a step forward."

The American can't understand why Andrey is unable to acknowledge an opening for some progress. For his part, Andrey tries to make the American more aware of his naiveté. 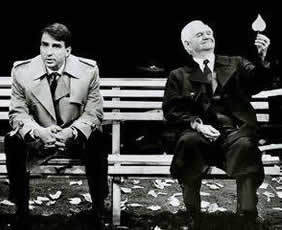 American negotiator: "You don't trust us?"

American negotiator: "The proposal has provisions. It has safeguards."

Andrey: "We don't trust the safeguards."

American negotiator: "There are checks on the safeguards. Verifications."

American negotiator: "Why not?"

Andrey: "Because we don't trust you."

In the mid-1980s, President Reagan sought the perspectives and counsel of Suzanne Massie, whose 1980 book Land of the Firebird: The Beauty of Old Russia had caught his attention. While Massie's history of Russia from the late first century A.D. up to the 1917 Revolution highlighted political and military doings, it also delivered insights about Russian art, poetry, country-life, court-life, myths, legends, and proverbs.

The Russian proverb that came to be a Reagan signature phrase was - "doveryai, no proveryai" - "trust, but verify."

Reagan used the phrase in emphasizing the monitoring and verification that were part and parcel of the INF Treaty, which was supposed to eliminate intermediate-range and shorter-range missiles.

In his 1988 play, Lee Blessing has the American negotiator refer to the U. S. proposal as a "treaty." The word "treaty" is invoked no fewer than fifteen times - almost as many times as the word "trust."

Rational men, irrational regimes, irrational leaders
American negotiator: "Governments can learn to be rational."
Andrey: "Impossible. They are too irrational."

These two characters (there are only two in Lee Blessing's play) retreat to the Geneva woods, over the course of several seasons. In one-to-one meetings - away from cameras and microphones - the American negotiator expresses his concerns, his fears, and his exasperation; the diplomat conveys his world-weary reservations with respect, regret, and playful cynicism. (With great effect, an actress has occasionally been cast to play the role of the Soviet diplomat.) 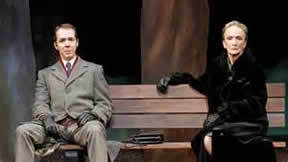 In these one-to-one moments of private candor, theatre-goers, as well as readers, are given to understand why genuine arms-reduction and disarmament have not been accomplished.

In response to the American negotiator's earnest pleas for rational restraint and self-preserving abstinence, the Soviet diplomat offers a kind of resignation:

"The most exciting thing in the world is to know we can destroy the world. Like that. In a day. To know the bombs and the soldiers are in place. Their hands at the controls. The computers constantly running, monitoring, ready. We have never known such excitement. Alexander, Napoleon, Hitler would give up all of their conquests just to live in a world where such destruction is possible. Man has worked a long time for this. He is an animal who must fulfill every potential. Even the potential to kill himself. Even the potential to kill everything else."

The American responds with a "sermon" about "other potentials."

In 2015, despite subsequent "sermons" in the West, along with rhetoric about rational conduct, the capabilities and potential for annihilation seem as ominous as ever. There would seem to be factions bent on fulfilling the "every potential" apprehended by Andrey - by Lee Blessing.

Human Nature in Nuclear Negotiations
In spite of the Soviet diplomat's pessimism, the American negotiator persists. He refuses to buy into futility and resignation. Hopelessness is not in his portfolio.

His resolve, his perseverance, got me to thinking about the other Walk in the Woods - Bill Bryson's entertaining and instructive Appalachian Trail chronicle that has come to renewed prominence thanks to the recent movie adaptation starring Robert Redford and Nick Nolte.

As he began researching the Trail (the AT) and "the walk," Bryson concluded that the woods are "dangerously beguiling." After reading numerous accounts about mishaps, dangers, misfortunes, rigors, challenges, discouragements and disappointments on the AT, he realized that what he was contemplating was "way beyond - way beyond - anything [he] had attempted before."

Could the same be said about talks aimed at eliminating nuclear arms? 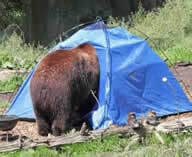 The bear has been a symbol in Russian lore and literature for centuries. And so, when Bryson notes some of the horrors recounted in Bear Attacks: Their Causes and Avoidance, I scribbled a note to myself about the Russian bear. A stretch? Yes, perhaps. But then Bryson is warned that bears are more apt to attack in a year following a bad berry year. By analogy, it can be noted that, in recent times, the Russian economy has had something akin to a few "bad berry years."

When every step is a struggle
Among its many challenges, obstacles, and setbacks, Bryson wrote of the AT's "ever-receding contour of rising slope" and the "plodding weariness" that had him lose track of how far he had come.

Could Bryson's reflections on his progress and lack of advancement on the AT serve as an allegory for thinking about the efforts (the slogging) that might be necessary to achieve genuine arms reduction: 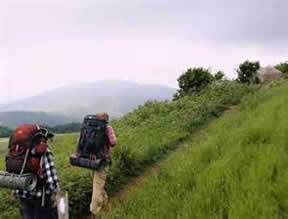 "Each time you haul yourself up to what you think must surely be the crest, you find that there is in fact more hill beyond, sloped at an angle that kept it from view before, and that beyond that slope there is another, and beyond that another and another, and beyond each of those more still, until it seems impossible that any hill could run on this long." 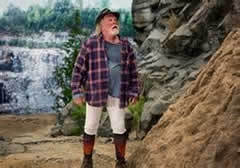 "Eventually you reach a height where you can see the tops of the topmost trees, with nothing but clear sky beyond, and your faltering spirit stirs - nearly there now! - but this is a pitiless deception. The elusive summit continually retreats by whatever distance you press forward, so that each time the canopy parts enough to give a view you are dismayed to see that the topmost trees are as remote, as unattainable, as before."

One can imagine Lee Blessing's American arms-reduction negotiator lacing up his wingtips and hoisting his briefcase with the same tired hopefulness that Bill Bryson summoned as he laced up his hiking boots and hoisted his backpack. Bryson explained: "Still you stagger on. What else can you do?"

Lee Blessing's American negotiator tires but never gives in to his frustration. He refuses to view civil engagement with the enemy as "a pitiless deception," even as the obstacles (like the AT woods) seem boundless.

"Every bend in the path presents a prospect indistinguishable from every other, every glimpse into the trees the same tangled mass. For all you know, your route could describe a very large, pointless circle."

The Soviet diplomat counters: "It is not progress to take a small step forward, and slide back three.... We have spent a decade creating bargaining chips - new weapons built expressly so that they can be bargained away later.... We build and get rid of bargaining chips.... The real arsenals remain untouched. In fact, they grow."

The American negotiator perseveres; he fervently believes in "the development of better systems of trust - to combat each new weapons system in turn." He insists, that "for every new weapons system, a new trust system."

What would it take?
Earlier in the play, the Soviet diplomat rues,

"We sit across the table and look very grave, and talk and debate and argue about imminent world destruction.... We should put the table at the bottom of a missile silo. Then we would negotiate...." 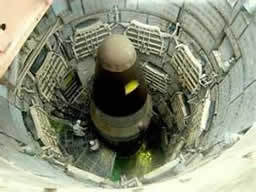 To bolster his entreaty for a new system of trust, the American reaches into his coat pocket and produces a folded piece of paper. A revised proposal - on a single page.

Could something so straightforward, so succinct, so unequivocal, so transparent - so verifiable - be the path to an agreement?

The American's one-pager isn't made suspect by secret side agreements; thus, firmer footing - no slippery slopes.

Nature's terrain, and the Nuclear landscape
In Bill Bryson's A Walk in the Woods, plate tectonic upheavals - continental collisions - have given rise to the crevices and chasms that have to be negotiated on the way to seemingly unattainable peaks.

In Lee Blessing's A Walk in the Woods, a resolute man and a resigned man "go over," but do not surmount, the positional obstacles of their homelands. Their efforts do not lead to a summit, even though man-made intercontinental collisions may not be survivable. We live with the risk that man's "every potential" may level the earth's topography - and make life unattainable.

"Hiroshima: The Sickness of Nuclear Proliferation"

"On the Beach : On the Brink, the Fallout From a Permissive Nuke Deal With Iran"