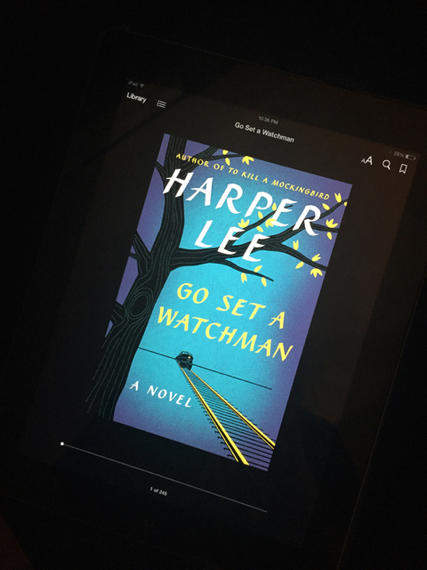 "Shoot all the bluejays you want, if you can hit 'em, but remember it's a sin to kill a mockingbird."

How does an author live up to their legendary status after creating a timeless novel? The pressure is difficult to ingest and most likely a demon that Harper Lee wrestled with having never published since the release of To Kill a Mockingbird. With the recent discovery and publication of Go Set a Watchman we are faced with disillusionment of our first fictional love, but we have earned clues into the writing process of a literary genius and opened up a much-needed dialogue about literature and race relations.

There has been a great deal of controversy surrounding the July publication of Harper Lee's long lost manuscript. From its unpolished and disjointed nature to how shockingly an elderly Atticus Finch is portrayed. With so much debate, a couple's 14-month-old Atticus got his name changed. It is important to remember that Watchman was initially rejected for publication in 1957 and was never intended for readership, mass consumption or analysis.

Let's take Watchman at face value. It is a draft of a novel by a young, fledgling writer. Ms. Lee's use of language and description are beautiful and vivid. The pace of the old South and its quirky twangs and archaic notions are displayed meticulously. Chinaberry and pecan trees dot the landscape, society ladies gossip wearing white gloves and hats and yes ma'am's are aplenty. Set aside the disappointment that Atticus is now different. We are viewing Watchman with hindsight submerged in Mockingbird's universe. Ms. Lee's process as a writer is front and center. Her characters are detailed and eventually develop into the ones we love so dearly. Writing fiction is a gut wrenching process, time consuming and very difficult to knock out of the ballpark on a consistent basis. With that being said, Ms. Lee took the sage advice from her editor and applied the best aspects of Watchman to use in Mockingbird.

The recent depiction of Atticus as a bigot is jolting. A character's development is complex and can be viewed quite differently through each individual, as seen through a young Scout and then an adult Jean Louise Finch. Watchman's"Atticus is certainly not the man we cherished and respected in Mockingbird. He is a brash unapologetic disappointment to our original impression, but a real illustration of time and place. His portrayal and the publication of Watchman has pushed us to reexamine how we deal with and think about race relations and forced us to discuss a meaningful and intellectual topic.

Perhaps what scares us most about Go Set A Watchman is that over fifty years after it was penned, humanity has hardly inched past its archaic prejudices and preconceived notions about race. Watchman is a glimpse into a conflicting and ugly time period that is still relevant today. We pine for the Atticus of Mockingbird. He is beautifully heroic, a character we want to know or be. He is seen through the eyes of young admiration, but as the rose-colored glasses tumble to the ground we find that Atticus has essentially deceived us.

The one human being she had ever fully and wholeheartedly trusted had failed her; the only man she had ever known to whom she could point and say with expert knowledge, 'He is a gentleman, in his heart he is a gentleman,' had betrayed her, publicly, grossly and shamelessly.

I am grateful for the rare opportunity that Go Set A Watchman has provided. A treasure and snapshot into something we were never intended to see: a study of process, character development and proof of craft in creating a fictional universe. Each word chosen with precision, revised, re-written and then reinvented. Without Watchman, Mockingbird would never have existed. It was the vehicle that led Harper Lee to create the masterpiece we all adore.

Study Watchman, read it with fresh eyes. Revisit To Kill A Mockingbird. Get immersed in this unique happenstance. A time capsule has dropped on to our doorstep, a slice of childhood, a knotted tree trunk filled with secret trinkets. Remember the Boo of your neighborhood, reconnect with your "Dill," and have a heart for Tom Robinson. Yearn for this Mockingbird with an Atticus who is oh so sweet and idealistic. Where we sip lemonade on a hot summer day and swing on the porch till sunset.

Sadly, life is filled with heartache and disappointment and Go Set A Watchman is a stark reminder that we still have our work cut out for us.