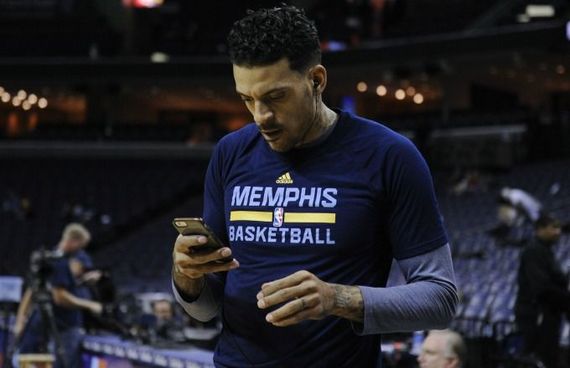 In the seventeenth century, Pascal said, "All men's miseries derive from not being able to sit in a quiet room alone."

In 1903, the German sociologist Georg Simmel argued, in an essay called "The Metropolis and Mental Life," that in cities saturated with technology, "stimulations, interests, and the taking up of time and attention... carry in it a stream which scarcely requires any individual efforts for its ongoing."

And in April of 2016, The New York Times reported:

The article goes on to describe NBA players checking their cell phones during halftime:

Hawes [who plays for the Hornets] said that for his pregame nap -- a customary routine in the league -- he has needed to put his phone farther and farther from his bed. "So if I get the itch, I can't just roll over and throw away an hour scrolling and going down that rabbit hole."

Let's go down that rabbit hole and see where it leads.

The minutes after the final buzzer, when the players return to the locker room, can resemble the moment when a plane lands or a subway car emerges above ground: a mob of silent people, heads hovering over glowing screens, reading texts, emails and social media notifications

"You see everyone looking like zombies getting to their phones, trying to see what's going on and if they missed anything," Caron Butler of the Sacramento Kings said of the postgame scene.

Phil Jackson, the Knicks' president, told players this season that he preferred they not take their phones out at halftime, [the Knicks' Kevin] Seraphin said. "Phil's really old school. He doesn't want players to touch their phones. I mean, you can take your own risk, but he doesn't really like it."

Anyone who has ever seen a movie about professional sports knows that the locker room is not supposed to look like a morgue -- not during halftime and surely not after the game ends. And why does wanting players to focus make Phil Jackson old school? I remind my readers of the Waldorf Schools, and if you are new to my writings, take the time to read up on "old school" that is actually sought out by the leaders of high tech, and ask yourself what do they know that maybe we don't?

Like many, I am an addict too. Yet, as I have written in the past, we need to be cognizant that it is an addiction and find discrete occasions to resist the temptation of doing the Alice thing and blindly following the rabbit.

Mobile technology -- that is, technology that gives us mobility -- is liberating; empowering; enabling; galvanizing and gives us all power to connect not just in ways that are new but from everywhere and anywhere.

Back in January of 2015, The Guardian tackled the dichotomy of the mobile world in which we live in an article called "Mobile Phones Have Changed the World for Better or Worse."

I will let you follow the link and read the piece in its entirety, but this one paragraph sums it all up for me:

Is a concert a concert if you don't Instagram it? Is an untweeted thought worth a fig? If you don't log your gym session will your cardiovascular capacity really increase? A resounding yes to all three. And here's a question we've all wanted to ask: all those people chatting happily away on the way into work every the [sic] morning. It's 8am. It's cold. We're all tired. Nothing's even happened yet. So who on earth are you talking to?

And that is me making inane calls, early AM, to people I spoke to only a few hours before and the only thing that has happened is that I slept. And be honest, have you worried about not logging your run? Full confession: I have!

I have written about unplugging and reconnecting -- something I do every week for a 24-hour period, as I am a sabbath observer. And every time I mention that fact and recommend that everyone find their own "sabbath" moment -- no matter the day or length of time -- I am barraged by readers telling me how doing just that has given them a greater understanding and appreciation of "being in the moment" for the rest of the week.

Because here is the truth:

In a 2015 study by the Pew Research Center, 89 percent of cell phone owners said they had used their phones during the last social gathering they attended. But they weren't happy about it; 82 percent of adults felt that the way they used their phones in social settings hurt the conversation.

And no doubt that explains this phenomenon: "Escape Rooms Have Become the Places to Get Away From It All."

According to the guide EscapeRoomDirectory.com, more than 3,725 escape rooms can be found in 65 countries, from Brazil to Bulgaria to Bahrain. Locally, some 20 escape room locations have opened across New England -- in old office spaces, warehouses, and tourist areas, even an old police lockup.

What explains their appeal? With the onset of smart phones and devices, the opportunity to socialize with each other, face-to-face, is increasingly rare. An escape room makes that possible. ... "The difference here, in the real world, is that you can't just keep clicking on things until something happens. You actually have to make sense of things. And take action."

Which brings me to this:

According to Iconoculture's Global Trends Report, which compared top values from 2010-2015, the way people identify with values has stayed pretty consistent.

These values below have increased by 3 percent or more:

And this value decreased by at least 3 percent:

And there you have it -- stable or not, the value of friendship has taken the biggest hit and that is in a world where we think we are more social than ever.

Let me turn to one of the great philosophers of the last century and a particular icon of mine whom I have quoted before:

I, not events, have the power to make me happy or unhappy today. I can choose which it shall be. Yesterday is dead, tomorrow hasn't arrived yet. I have just one day, today, and I'm going to be happy in it. - Groucho Marx

We often seem to be confused. We make the events; we share the events; we enjoy the events, but only if we are in the moment. It's not our smartphones or apps that make them great -- it's the collective us who make them real and exciting and worth sharing.

I call your attention to a true hero for our time, from last October:

Yesterday, a photo emerged of the Boston premiere of Johnny Depp's new film, Black Mass, that captured a rare red carpet moment: Among the cheering fans was a woman simply enjoying the moment without a cell phone in her hand. If you take a closer look at the image, this sweet-looking lady, with her arms crossed and a smile on her face, is the only person who is actually watching what's happening before her. While everyone around her has their eyes fixed on a screen, she's looking at the stars in real life, and living in the moment.

Take that picture; tweet that thought; share that video and then, as you teeter on the brink of the rabbit hole, put the device in your back pocket or your bag. Turn off the phone and enjoy the moment.

Of course you can always be in the moment the way Snapchat defines it, but remember as ephemeral as it seems, someplace, somewhere even they preserve it.