"Back at the Waldorf.
This arrival in the wild country of the soul,"

He felt like Marlon Brando, and I like Audrey Hepburn. But in the pristine white marble lobby of the grand 1893 Art Deco building, what we looked like, really, was out of place. 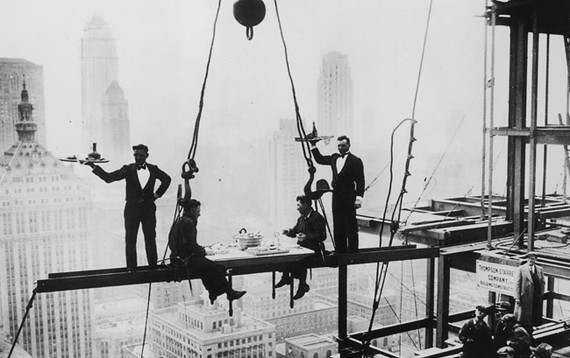 We did not care of course. We had left physical reality out on Park Avenue, and stepped into the Waldorf. We were, proudly, checking in.

"All approaches gone, being completely there,"

I looked around. A wafting smell of orchids, dark oak paneling, and a faint taste of the last strawberries of the summer infused into a glass of water. Cole Porter's 1907 grand piano sitting silently in the corner. I pictured it, a long time ago, playing "Don't Fence Me In."

The lobby was crowded, as lobbies always are.

"Where the wild poem is a substitute
For the woman one loves or ought to love,"

"One wild rhapsody a fake for another."

A black and white photograph of Prince Rainier III and Princess Grace of Monaco, the day after their engagement in January 1956. I snuck a peek at mon chéri as he bravely maneuvered the suitcases. Even flustered and in sweatpants, he was more handsome than any prince.

Our room was small and old. We had clearly not been deemed worthy of the presidential suite. Still we laughed and jumped on the bed and proudly unpacked our few belongings. We were in love, we were in New York, and penniless or not, we were staying at the Waldorf.

The Waldorf, where on opening night, 1893, a maître d'hôtel whipped up the mixture of apples, celery, and mayonnaise that became the world's most famous salad. Where in August, 1944, an unknown Frank Sinatra was given that one chance at a début performance in the Wedgewood Room that catapulted his career.

Where throughout his presidency, Franklin Roosevelt entered through a secret underground train station from Grand Central Terminal "to hide his disability from the public." Where Douglas MacArthur requested a constellation in his bathroom, and Elizabeth Taylor a three-person bathtub in hers. Where John F. Kennedy left his rocking chair, and some kind stranger left me a biography of Marc Chagall.

Most importantly, where in 1931, to epitomize luxury, privacy, and the incomparable pleasure of breakfast in bed, room service was invented.

"You touch the hotel the way you touch moonlight
Or sunlight and you hum and the orchestra
Hums..."

We spent a weekend at the Waldorf.

He wore a crisp white shirt, I a white cocktail dress that twirled when we danced in the hallway. We sipped Prosecco in a dim speakeasy where soft jazz played, and made sweet confessions in an underground whispering gallery. We inhaled the smell of rare books in an old library, and that of rich coffee poured from an engraved silver pot. We wrapped ourselves in warm white bathrobes and sunk into sheets that smelled of Japanese orange blossom.

And while we did not have breakfast in bed or at Tiffany's, we did, unconventionally, sip our sodas in front of the jewelry store's windows a few streets over.

Wallace Stevens wrote "Arrival at the Waldorf" as part of a series aptly entitled "Parts of a World" in 1942. In the poem, a man returns from Guatemala and stays at the hotel, where those two worlds, along with reality and imagination, intertwine, intersect, merge, and separate. The places come to represent the memories with which he associates them, the mundane becomes magical, the fantasy becomes real.

"A generation sealed, men remoter than mountains,
Women invisible in music and motion and color,"

Except they are not. By some "composite of multiple nonfictions," they have become fiction. We have transformed them from places to experiences, and they are now magical, because we have imagined them to be so.

One does not go to Tiffany's for the jewelry, but for a glimpse of a waiflike figure wearing a Givenchy cocktail dress in broad daylight, eating a croissant and dreaming of a better life.

One does not stay at the Ritz for the rooms, but for a drink at the bar and a conjured up repartee with the writer who gave it his name.

One does not go to Claridge's for tea, Disneyland for the rides, or the Eiffel Tower for the view. One goes to a fountain to toss a coin and make a wish, the shore to listen to seashells and watch the sunset. To Abbey Road to reenact the Beatles, Portobello Road to twist bed knobs and broomsticks. To Saint Paul's to feed the birds, Saint Peter's to feed the soul.

I went to the Waldorf to fall in love.

We stepped out of the Waldorf and onto the reality of Park Avenue. He no longer felt like Marlon, I no longer like Audrey. But he held my hand; it was magic enough.

"After that alien, point-blank, green and actual Guatemala."
- Wallace Stevens, "Arrival at the Waldorf"

This post was originally published here, on the author's blog "Aristotle at Afternoon Tea."