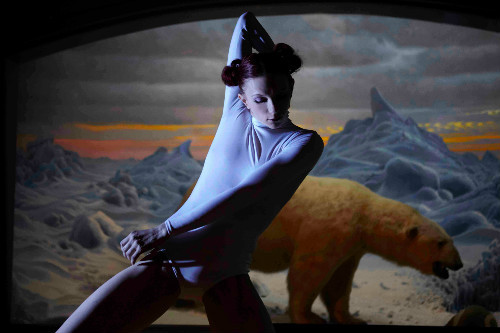 My first thought as I sat in in the Milstein Hall of Ocean Life at the American Museum of Natural History when dancer Megumi Eda appeared under the scale model of a female blue whale was simply: we are so small. We are relatively small creatures, of course, as the museum space's large displays continually remind us. Yet we have an environmental footprint so much larger than living beings many times our size. That is the story told behind and through Karole Armitage's latest piece, On the Nature of Things, currently running at the American Museum of Natural History.

Karole Armitage, and her company Armitage Gone! Dance, is known for its blend of styles of movement. Her dances have a characteristic style, which takes movement vocabularies from ballet, street vogueing, modern dance and more. Even if you have never seen a formal piece of her work, Armitage's iconic choreography for Madonna's "Vogue" music video means that you're undoubtedly familiar with her style. I have been a fan since I saw Armitage Gone! Dance's piece "Rave" a few years ago. The energy, virtuosity and aesthetics of that piece made a true fan out of me, and I have seen every piece of hers that has come to the city since then.

All of these characteristics of Armitage's work came into play during On the Nature of Things. First of all, you can't really beat the Milstein Hall of Ocean Life as a backdrop for a piece about the environment and climate change. The juxtaposition of human bodies dressed in orange synthetic materials, moving through the space with such grace and ease while the stoic, static, gigantic animals from in and around the oceanic world look on is striking.

This pairing of moving dancers and stationary museum displays mirrors the greater partnership(s) of this piece: dance and natural history, art and science. Indeed, Stanford University biologist and professor Paul Ehrlich narrates this piece, and it was through the collaboration of Armitage, Ehrlich and curator Rob DeSalle that On the Nature of Things came to be. His opening night introduction included a discussion of how art and science go hand in hand. Ehrlich made a point of saying that rational thinking is not the only factor involved in decision making, as it is emotion that is the greatest guarantor of action. So, if you want to talk about climate change, talking alone is not enough. This is where art can come into the equation as a catalyst for social change.

Ehrlich's voice provides another kind of backdrop to the piece that, along with the museum's setting and musical accompaniment, give On the Nature of Things a feeling somewhere between an episode of The Twilight Zone and a 1950s informational nature film. This aesthetic choice worked really well for me, as the words being spoken were so completely in contrast with that mindset, creating yet another of the hybrid forms for which Armitage is famous. Ehrlich warns us to think about the amount of life our planet can support before selfishly having a large number of children; as he says this, dozens of dancers rush the stage space to show the crowding of bodies ignoring such advice could create.

The dancers themselves went through the patterns of a seemingly naturally blossoming earth, which over time becomes burdened, over-crowded and dissembled. The pace of the piece reaches a fever pitch in which the dancers, as individual organisms, seem to be both competing with each other and frantically trying to work together to survive, with their failure only driving them into frenzied actions. The piece is structured around several key dancers -- Ahmaud Culver, Megumi Eda, Ruka Hatua-Saar, Cristian Laverde König, Randall Anthony Smitth, Izabela Szylinska, Abbey Roesner and Emily Wagner -- who are all virtuosity personified.

I will say that I love Armitage's work best when it is performed to music that sounds more contemporary in nature, as I believe that her movements are so contagious that the pleasure of viewing them while listening to music that makes my body want to dance is unparalleled. This music does not have quite the same purpose, and so, though I can't fault the piece for that, I do always wish to see another piece that reminds me more of "Rave." On the Nature of Things is less about showing Armitage's most exciting and new choreographic contributions and more about using movement to tell a narrative that is not exactly pleasing: if we don't start paying more attention, we're going to totally ruin our planet.

This artistic collaboration between the arts and sciences is exciting in its purpose, though the reasons it has come into being might not be the happiest. Too often people consider these modes of thinking as diametrically opposed, even as they are so often said together. Armitage and the American Museum of Natural History are not the first to perform such a collaboration, of course, but the fact that it is still notable shows how rarely a major museum and artist enter into such an enterprise in the hopes of education. Catch this work before it's gone, as the story told underneath the blue whale's tail is a whale of a tale indeed.