By Laura McBride | Off the Shelf

I once had lunch with a group of women who had been in a book group together for decades. I asked them about their favorite books, and the books they hated, and the books that had caused them to fight, and suddenly, the tall one in the middle said: "Oh, what was the name of that book? You know..." and without another word, every woman started to laugh and speak at once.

"The Particular Sadness of Lemon Cake... by Aimee Bender." 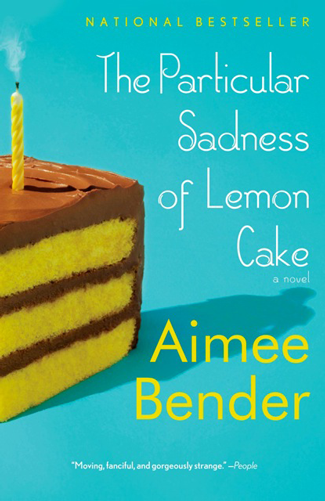 A couple of women smiled, but the tall one in the middle, drawing out her words slowly, said, "You loved when her brother turned into a table leg?"

Just writing the words, "You loved when her brother turned into a table leg" makes my eyes water with pleasure. Whenever I think of that day, of those delightful reading women, I smile.

That Aimee Bender's story makes such a protest possible delights me.

Bender follows in the magical realism tradition of Gabriel García Márquez, Bruno Schulz and Italo Calvino. Her writing is light, amused, airy -- but dead serious underneath. In The Particular Sadness of Lemon Cake, she turns her delicate touch to a family falling slowly and inevitably apart. In doing so, she also poses implicit questions about art, words, imagination and how reality is best represented.

The Particular Sadness of Lemon Cake is narrated by a girl who discovers that she can taste other people's emotions in food. She tastes her mother's desolation and despair in a slice of lemon cake; from there, she notices the way her parents relate and realizes that her mother loves someone else. This discovery is the impetus for her journey out of childhood and into an increased awareness of others. Gradually, the novel turns toward her older brother, who also has an unusual gift. Beautiful, intelligent, and disdainful of his little sister at first, his gift draws him away from others just as her gift draws her toward them. As he becomes increasingly socially isolated and removed, Bender hints at unmusical realities, at loneliness, mental illness, and loss. These are the shoals our young narrator must learn to navigate: her own particularity, her mother's secret life, her father's past, her brother's disappearance.

In writing sprinkled with the strange and the impossible, Aimee Bender transforms silliness into light. Like a poet with a surprising metaphor or an onomatopoeic word, she shows the reader where to look. See this crazy improbability? See this instant when the boy becomes a chair? There's the rub. There's the point of meaning. Pay attention now. What I am really trying to say is right here.

Aimee Bender dares to let loose her imagination. She trusts in magic, in the slippery fish of her unconscious to find its way to the rapids of reality. As an eager, amused, and yes, occasionally baffled, reader, I feel richer for it. A novel that is whimsical, elusive, perplexing, and delightful all at once is a special thing, indeed.

Laura McBride is the author of the debut novel We Are Called to Rise, which is now available in paperback.