Generational challenges and Millennial themes are not 100% the same worldwide. Big surprise, right? Over the Thanksgiving holiday, I visited Tokyo, Japan and had a chance to observe the trends of an Eastern, "First World" developed nation. The insights gleaned were quite surprising:

Gaming, Gaming and More Gaming
In Japan, gaming is an age-independent phenomenon. We couldn't go anywhere without running into arcades and gambling halls. On packed subways, we witnessed people of all ages playing games on their mobiles as a part of their daily commute. If there is anywhere to develop and test gaming for learning initiatives, it is Japan. Having an older generation so easily immersed in technology also significantly reduces the generation gap in Japan in comparison to other less technology-advanced countries. 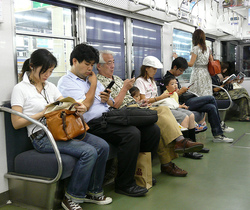 Lack of Work/Life Balance Initiatives
Employees work long days, after which there is an expectation to socialize by going to dinner or joining for some drinks with work colleagues. Throw in an often long commute and you have set the stage for one of the lowest work/life balance cultures in the developed nations. It would be interesting to understand how this impacts engagement, productivity, and creativity. As a Japanese female bluntly told me, "The Japanese aren't creative. We are good at improving upon ideas, but not coming up with brand new innovations." What innovation could come to fruition by implementing work/life balance initiatives trialed by Millennials in other cultures where work allows space for creation, failure and fun?

Less Entrepreneurial
Unlike China, India, the Philippines, and first world countries, the Millennial trend towards entrepreneurial spirit doesn't hold in Japan. The landscape is less startup and more traditional corporate. According to Forbes, Japan invests the least in venture capital funding compared to all other advanced countries; with the US deploying nearly 20 times more in venture capital funding. One of the few Millennial entrepreneurs, Mikami who started his first business when he was 13, credits the extreme risk aversion culture.

Gender Gap
Where the rest of developed nations are extremely focused on closing the gender gap, Japan has one of the lowest participation rates of females in the workforce. Beyond participation, the roles and career paths available to women are very limited. This is surprising because Japan has one of the highest rates of well-educated women in the world. A good example is Ms. Takeda who graduated with a law degree from Japan's top private university, Keio, and applied at a trading company. She was told she would only be allowed to enter the "clerical" stream of female graduates destined for secretarial work. Most of the male graduates, meanwhile, were primed for management positions. "Until I was in my final year of university, Japan seemed fair. Then I started applying for jobs and it hit me how completely they destroy your chances." Millennials globally are aware of gender gap, especially given the transparency offered by the internet on the issue. Japan has a long journey to close their gender gap and make use of their full talent pool.

A Heavy Burden
The younger generation in Japan carries a heavier burden for a secure financial future. As a result of low birth rates and many other factors including lack of participation of women in the workforce, Japan's working age population is expected to decrease by 40% by 2050. With a declining population and lack of guaranteed pensions as older generations had, retirement transition and economic health is uncertain.

Large Focus on Well-Being by Boomers
Today, the population of those 65 and older in Japan is one in five. In comparison, in the US, we won't reach that level until 2050. The older generation strives to keep active and maintain their health. Many eat well, run, bike, and stay physically fit into their 70s. This a culture where individuals think deeply and proactively about not being a burden on the younger generation, both physically and financially. An older gentleman we met bikes an average of 25 km a day as a tour guide and has traveled to over 60 countries. He espoused the benefits and importance of being both mentally and physically active.

Since Millennials Aren't the Same Around the World, Neither Should Your Strategy
Japan offers a wealth of best practices as well as considerable challenges. When considering your engagement strategy, it's important to keep in mind that one size doesn't fit all. As a global company, delving into the differences by culture and then scaling across commonalities is the best approach.