Here's what I know. I was in the audience, six rows from the podium, on the night of June 7, 2016, when Hillary Clinton became the first woman in history to be the Presidential nominee of a party. June 7, 2008 felt like a million miles away as we watched the woman who had walked every inch of those miles, resplendent and dignified, gracious and humble, surrounded by the love of a crowd living history. 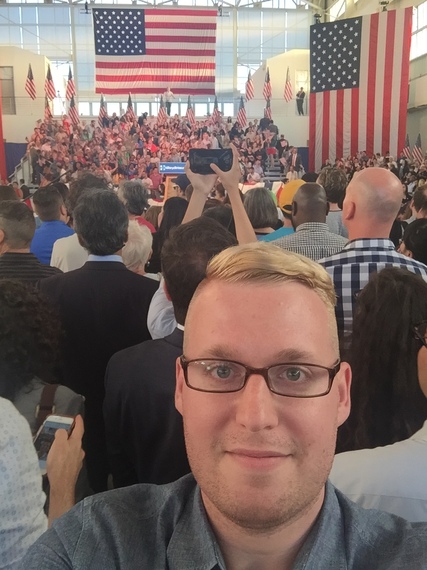 I've been fairly unabashed in my love of Hillary Clinton. I have taken heat for it daily, online, in my personal life. My list of blocked Twitter users grows daily, as my timeline floods with the deluge of hatred and personal attacks on me and my family (a husband and our son). And that's just part of being a Hillary supporter, and as someone who works actively to defeat Donald Trump. We tend to have small things like truth, facts, and logic on our side, whereas the right tends to "feel" certain ways about Hillary that outweigh actual quantifiables. Well for me, facts weigh more than feelings.

And so when Hillary gave her foreign policy speech on Thursday, June 2, I was delighted that she was living in a world of facts. Direct quotes from Donald Trump, one after another, each more racist, xenophobic, and bigoted than the last. Because this isn't a game, this is real life, and the choices here could not be clearer. The speech was met with nearly universal praise on the left, and near silence on the right. Because in politics, you can't litigate what a person has actually said, especially when those statements are as indefensible as those made by the Great One himself.

So it was within that context that we began the week. In the face of all mathematical probability, there were still primary contests to be had, little red and blue shapes on the map to be colored in and claimed. On Monday night, I was on my couch, channel surfing between Monday Night Raw (you will remain judgement-free here) and the Penguins/Sharks playoff game. My phone lit up, with the AP reporting that Hillary Clinton had obtained the necessary delegates to claim the Democratic nomination. I immediately switched to CNN, they didn't have the story. MSNBC was up next, with a beaming Rachel Maddow telling me that it was true, that through independent reporting, the AP had confirmed that my girl had done it.

I have been waiting eight years to get out and vote for Hillary Clinton again. As my husband sat next to me on the couch grading schoolwork, and with our 7-month old son asleep upstairs, my eyes glassy, I looked at the number 2,383 on the screen. It had happened. But there were still primaries on Tuesday, states to be won, voters to engage, apprehensions to calm, unity to be built, ceilings to officially crack.

Waking up on Tuesday morning, June 7, was surreal. I had set my phone alarm for 5:45, and had set Michael Bolton's "When A Man Loves A Woman" as the alarm tone. Judge me, do it. I walked into my son's room, peered over the crib rail and said "Gabe, guess what we get to do?" Beaming smile. I looked into his eyes through my own, and with invisible onions being chopped somewhere in the room, I whispered, "We get to vote for Hillary today." 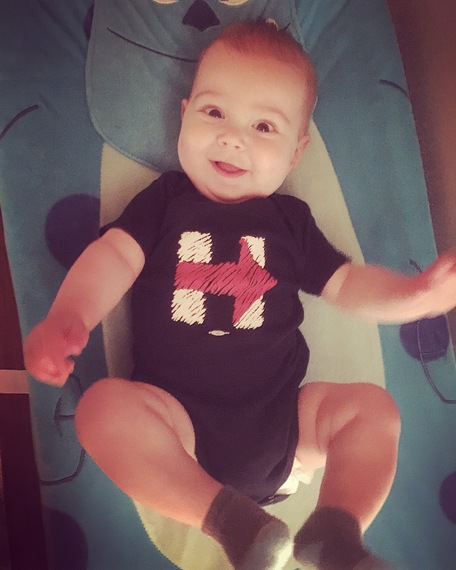 Once Gabe was dressed, we were on the road, seven minutes away to our polling place. I strapped Gabe into his Baby Bjorn, and walked into the booth. And while what happens in there is supposed to be confidential and private, it is safe to say that I taught my son how to defeat a bully with one push of a button. I have written about our world, and its rapid advancement on social issues like marriage equality. That doesn't mean that I don't, from time to time, get lost in it. That I walked out of the voting booth with my husband and son, is a moment in time that will stay with me forever. 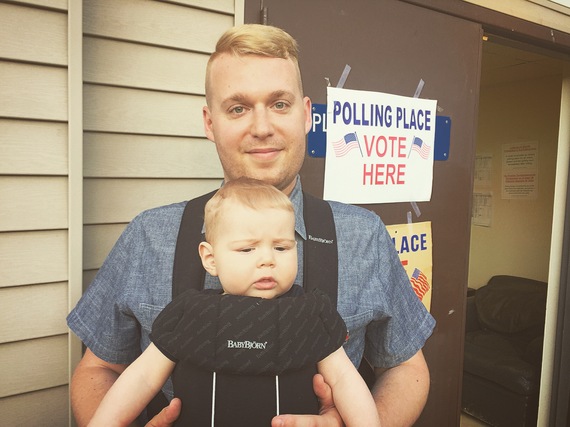 During the day, a member of Hillary's campaign staff Tweeted out that there would be an event to celebrate the clinching of the nomination. I responded that I'd love to be there, but that the event was full. I received a direct message, telling me to go, and giving me a cell phone number in case there were any problems. I was told that I needed to be there, to witness history. I called my husband to see if he could fly solo on baby duty. He simply said "I love you. Go."

I left work at 5:00, bolted for the subway, took it down to Jay Street in Brooklyn. I ran a mile to the outside of Navy Yard, waited an hour for a shuttle bus to take me into the complex, waited another hour on line to be processed through the Secret Service to enter the Duggal Greenhouse. And then I was inside, five rows from a waiting podium, from history. 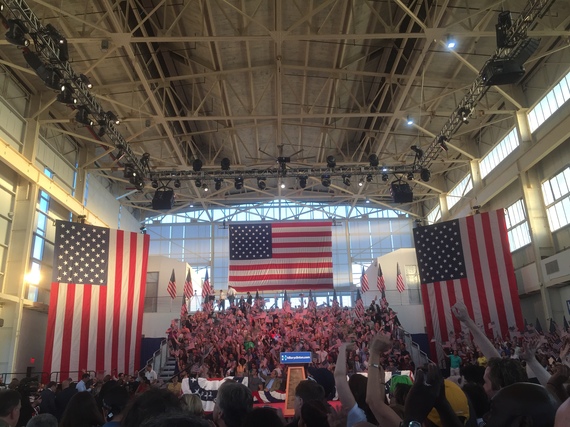 For all the hate I've taken for my love, on June 7, I was every bit at home. Giant American flags adorned the walls, familiar faces like Andrea Mitchell and Jeff Zeleny worked the press area. The air was electric, filled with love and admiration and excitement. An enormous television screen on one wall showed us live reporting of the primaries, where I would eventually see that my Garden State had gone overwhelmingly for Hillary. Handmade signs reading "Shattered Glass" and "Love Trumps Hate" were everywhere. I saw thousands of buttons "Hillary, Y'all!" and t-shirts "Yassss Hillary!" 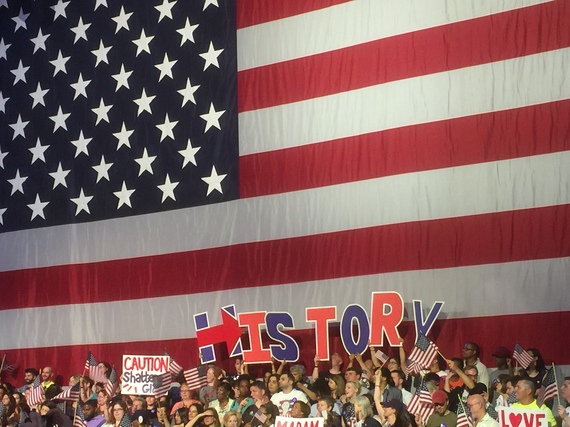 She took the stage a little after 10:00, following a video package detailing the history of women's fight for equality through time. I have been to Wrestlemania, I have seen the New Jersey Devils win the Stanley Cup in Game 7 at home, and to this day, I have not heard longer, louder applause in all my life than I did on June 7. It was overwhelming, and it could be felt in every part of your soul. 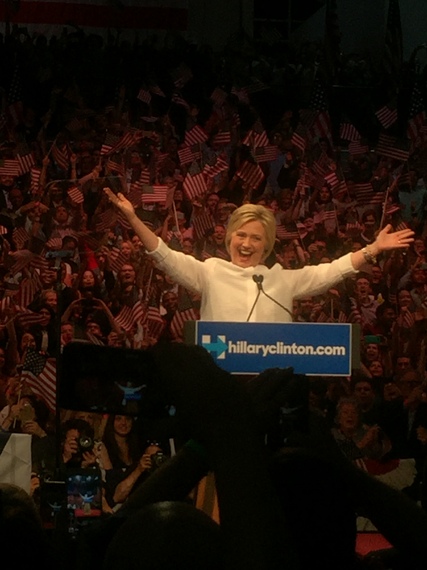 The speech itself was wondrous, and will be covered by writers far greater than this one. And so I'll leave it to others to discuss what you saw on television. I want to tell you what I saw, in person, with my eyes and my heart.

I saw sons on the shoulders of their fathers, daughters in the arms of their mothers, grandmothers assisted by their grandchildren, all of us together in one space, united and not divided. And for the first time, way down deep inside of me, I finally got it. This is our moment, this is the time when we can truly unite a nation together, to stand not behind one candidate but together as a people to demand more of ourselves. We can and should and will rise above hatred and divisiveness, against bigotry and misogyny, disavowing racism in our leaders and our systems, and stand firmly for ourselves, to be the best us that we can provoke ourselves to be, the we whom we deserve.

Hillary is right. This election isn't about a candidate, it's about a country. At some point, you have to go into the voting booth and pull the lever for your country. If you are reading this and you are on the fence, if you supported another candidate and now you feel busted, I want you to come with me to a Hillary event. Come to one event, and meet the folks I met, who have phone banked every other night for six months, meet the pre-K teacher who hugged me and told me to thank my husband for being a teacher, meet the people behind the candidate. You will be welcomed with kindness and gratitude and love, with the most open of arms. Your tank will be left feeling more full than ever before, you will get it, I promise you. After Hillary's speech on June 7, I am left feeling kinder, more caring, and more loving. Imagine our nation feeling that way.

Our lives, the lives of our children and their children, will be better because this woman got back up, and up, and up, over the course of decades, and strove for something greater for us. Her candidacy is historic in theory, in principle, in delivery. The vision to see what we can be, the intelligence to map a plan, and the ability to execute it are part and parcel of why I'll vote for her in November.

Here's what I know. There will come a time when I am the grandfather being helped to the front of the line at the rally, to see a candidate speak. And I will know where I have been, and I'll recall the road that got me there. I'll remember the day I carried my son in my arms, and the promise of his future in my heart. I will be grateful for those men and women who had the courage to lead, who empowered me to be my best self, and I will remember how it all started.

With one push of a button. 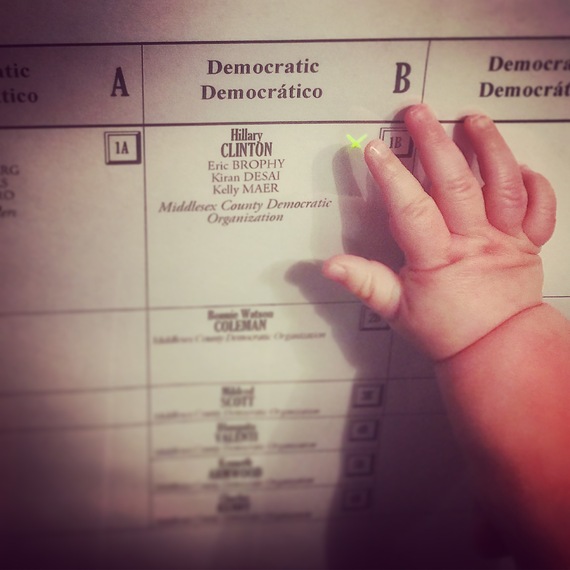