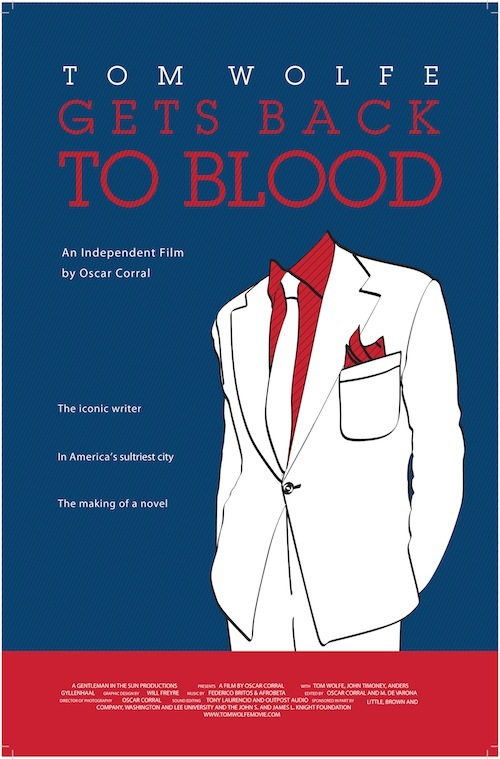 Poster for Tom Wolfe Gets Back to Blood. Photo credit: AGITS Productions

The rush hour mad dash on I-95 south to Miami from Palm Beach at dusk can be a challenge, depending on the occupancy of the HOV lane, the slowpoke lane, or the rubbernecking-inspired breakdown lane that always makes me picture some poor soul who reluctantly has chosen to pull over and have a nervous breakdown because he's exhausted his supply of patience. But as the traffic starts to thin out between Ft. Lauderdale and North Miami, the ride can become quite exhilarating and oddly beautiful, especially with a light rain rolling in from the Everglades spattering the windshield that wipers sweep clear for a split second at a time, offering a temporary color field post-surrealist experience under glass. At twilight, the road ahead morphs into a collection of meandering, mile-long neon streaks accented by pairs of evenly spaced brake lights, like flashing red eyes in a forest filled with predatory creatures, which warn of an impending slowdown and dangerous curves ahead. The skinny river of twisted lights takes off across the six lane bridge to Miami Beach, or one can veer off to the right and fade into the distance as the byway finally narrows to a two lane highway all the way to Key West, or a driver can continue straight downtown, which is the choice I make, as it is where we are headed to attend a screening of Tom Wolfe Gets Back to Blood, Oscar Corral's documentary about the author researching his latest novel.

Miami is arguably one of the most cosmopolitan cities in America, home to almost 500,000 residents, and as you cross the invisible line of the city limits, it soon becomes remarkably clear that the surrounding communities, like the boroughs of Manhattan, all have a distinct personality, and often an unofficial foreign language that provides a fascinating departure from the rest of the newly albeit facetiously nicknamed Gunshine State. Positioned just above the Tropic of Cancer with a constant breeze created by the Gulfstream, the sea levels went up and down like a rollercoaster for over 130,000 years before settling, leaving the mainland of South Florida just above the water line. The place prospered during the 1920s, collapsed at the height of the land boom, and then was wiped out by a ferocious hurricane in 1926, only to be outdone a few years later by the Great Depression in the 1930s. The only real silver lining was that most of Miami Beach's distinctive art deco architecture and seaside hotels were boarded up for decades and saved from demolition, and magically came to life again from the efforts of historical preservationists over the last thirty years. It likely was the invention of freon and DDT that made the place livable for visitors who wanted to enjoy near perfect weather in the winter and who helped coin the term "snow birds," adding to the impressive list of exotic winged creatures in residence, from pink flamingos to blue herons. But Miami, now the fourth largest urban area in the U.S., still had its challenges with race riots, drug wars, Hurricane Andrew, the Elian Gonzalez uproar, Gianni Versace's horrific murder, and an influx of drifting rafts full of refugees from Cuba and Haiti, and still survived adversity to become a major center of commerce, culture, fashion, education and contemporary art, including a home for the mighty Art Basel art fair, mixed together with panache, Cuban coffee, roast pig and topped off with a colorful nickname: "Capital of Latin America." What a story!

So, this was a perfect Atlantic storm of disparate but fascinating material for Tom Wolfe, one of America's most respected novelists, to unearth and examine under his polished magnifying glass to develop chapters and verse for his latest book, Back to Blood. Although there certainly has been a history of blood on the streets, here his new book and the documentary Tom Wolfe Gets Back to Blood are about blood lines and how they interact with each other. Short films or "making of" documentaries are common companions for major motion pictures, but not so for journalists. This is the first time a full length documentary about a major novel and the novel itself have been released concurrently. Besides being an incredibly interesting insight into the Wolfe-sonian process of research documented on film, particularly in the tropical setting with a menagerie of backgrounds, from cruise ships and tanned hips to thrift stores and bookstores, from strip clubs and golf clubs to nude beaches and the naked truth, Tom doesn't seem to miss a single detail, especially a visual one, as he describes a reflection on the water as "sunbursts on every curve" or a handshake from a stripper as a "tap on the inside of my thigh." The film not only reveals how Wolfe splices and dices the material he's collecting, but emphasizes the insider's opinion by his subjects in the film, from Norman Braman, the car tycoon and mega-art collector, to Manny Diaz, the Cubano former mayor of Miami, as a remarkably good listener. This documentary, produced and directed by former Miami Herald reporter Corral, shows what kind of stuff, actually, "The Right Stuff," it takes to pull together four years of research and narrow it down to a compelling and memorable insight into how a celebrated author and national treasure picks up the clues and inspiration that make Mr. Wolfe's work so successful and mandatory reading for most college creative writing courses. One of the great quotes in this movie is from Tom's longtime friend, John Timoney, the ruddy Irish former Police Chief of Miami, which puts the city in a singular, provocative category: "New York is all about the money, Washington is about power, L.A. is about fame, and Miami, is all about sex!" Suffice to say that Tom Wolfe Gets Back to Blood is a perfect companion and primer to enjoy before delving into the recently released book, Back to Blood.

Oscar Corral is an award-winning former newspaper reporter for Newsday and The Miami Herald, and author of Keep Her Contained, a novel. He now toggles between his pen and his video cameras, depending on the project at hand. Corral lives in Miami with his wife and two daughters, and is working on his next film project.

Tom Wolfe Gets Back to Blood is showing in video-on-demand through BigStar.tv and soon through Amazon.