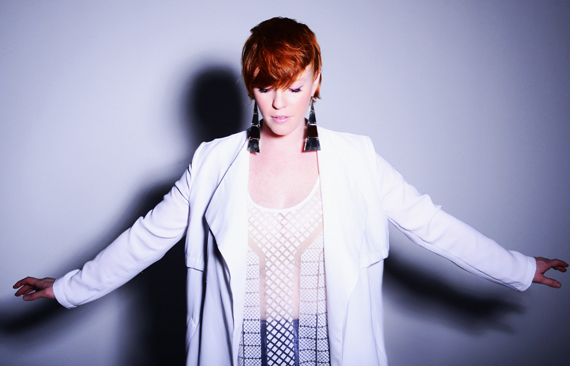 No matter where you live or what music you listen to, across the board there appears to be a trend: that one gender is much more heavily represented. Dramatic pop artist Anna Haas is speaking out about the apparent gender gap.

Anna grew up up in the arts, often writing music and playing coffee shops in her native Nashville. At eighteen years old, Anna made the move to New York to pursue a career in musical theater and dance in a modern dance company. During her time there, Anna re-discovered her voice and passion for singing and songwriting. "I felt like I wasn't fulfilling my greatest possible voice in musical theatre," Anna says. "I was making a career singing other people's words instead of my own." She had an overwhelming desire to write, knowing that songwriting would have the greatest impact for her artistically, so she headed home to Nashville to put together a band and her debut album.

There is no denying that Nashville has recently become an immense cultural hub. While integrating herself back into it the scene, Haas quickly began to recognize one loud trend, the under-representation of women on the radio, featured in press, playing on stage, and being heard altogether.

Anna's second and latest record, PASSION/POISON, showcases her progress and the direction that her raw and inventive creativity is taking her. "This new record is very simple and vulnerable," says Haas. "It's really about desire, acknowledging your true self and following that path. I hope that my music inspires women to cherish the spectrum of their experiences, from joyful to painful, to respect that every step on your path shapes your identity. As women, we've got to dig into the sadness, the anger and the happiness, and as female songwriters to write about all of it. Owning your womanhood as a songwriter can be incredibly inspiring, but sadly also isolating."

"I'd say my lyrics are the foundation of who I am as an artist. They're the story of my life." Haas says that many of her songs were born when she was writing strictly as an emotional outlet. Powerful artists who aren't afraid to say what they what, many of whom are women, inspire her. She is inspired and identifies with artists that she classifies as "larger-than-life" with strong voices like Beth Hart, Fiona Apple, Janis Joplin, Brandi Carlile, St. Vincent, Florence & The Machine, Lady Gaga, and Grace Potter, women who are unashamed to whole-heartedly embrace who they are on and off stage.

"There's an underlying current in the music industry that perpetuates men in music. It's everywhere," she says. "Look at this summer's major festivals. Line-ups typically showcase roughly 20 percent female artists. At Bonnaroo, for example, only 39 of 190 acts were female-fronted, or at Lollapalooza, 32 out of 141 bands. While there are many phenomenal male artists, there are at least as many deserving women, but women are so often under-represented. Something is wrong and we need to address it. I've heard the excuse that 'only women like female artists, while men and women like male artists.' I don't buy that."

Perhaps the scarcity of women on the scene is what perpetuates these supposed tastes. There is by no means a single person or entity to blame for this disparity. It's simply the culture. In order to reach equality between women and men in the music industry, people who call the shots in radio, film, press, and festival promotion need to take specific steps to address the imbalance.

If nothing else, Anna wants to encourage other women. She wants them to own what it means to be a woman, and to stop feeling the need to censor themselves in an attempt to fit into the culture. "Write what you need to write, and then fight to be heard."

Her new single, "Woman of the Wild," shares this vulnerability as she illustrates her journey back to her primal side, and it's an anthem for others to do the same. The vibrant music video, directed by Liann Kaye, captures Anna's dynamic personality, showcases her powerhouse voice, and communicates a woman's desire to break free from social expectations.

In her song "A Thousand Lifetimes," a power ballad of grief, she makes clear that she does not believe in God or an afterlife. She sings to a passed loved one, "I'm not one of those who believes in the thought that I'll see you again, but that doesn't change that I'll always love you". Anna is unashamed to own her truth, as much as it may go against popular culture and belief, in the simple hope that it will inspire others to do the same.

"There are many women in pop culture who are changing the game by representing women as true musicians, songwriters, and artists of substance. But we need more," she says. "The culture of music will shift towards equality when more songs written and performed by women exist in popular media and at festivals."

Anna encourages every music lover to question this gender imbalance in popular music. "It can't be for lack of talent, because we've got a whole lot of that," Haas says. The songwriter goes on to say, "It must first be acknowledged before it can be changed. Men and women of talent deserve equal representation and opportunities to make a living in the music industry."