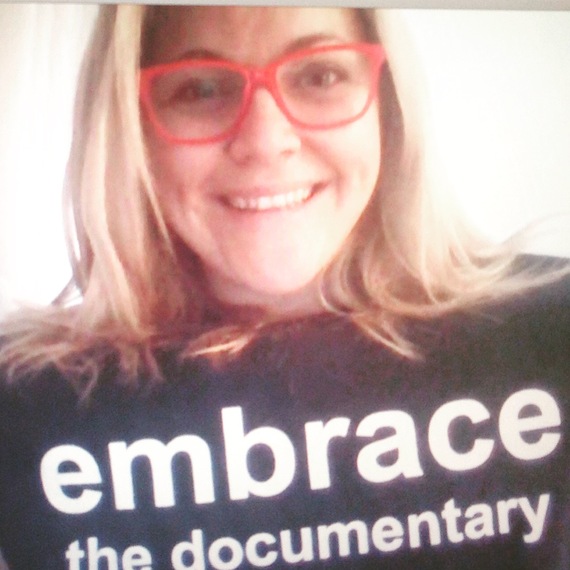 Each day millions of women wonder what it would feel like to look at their reflection in the mirror and fully embrace and love the skin they're in. To turn a stretch mark into a story of triumph, marvel at the legs they've always loathed as a road map of the miraculous journey they've carried them through or, as Taryn Brumfitt -- Aussie, mom to three children, and founder of Body Image Movement -- says, "See that the lines on our face only serve to remind us that life is short and the bucket list is long."

But the road to self-acceptance for Taryn hasn't been easy. In 2012 after an unbearable string of days despairing over her post-baby, unrecognizable body, she found herself with an appointment on the calendar for surgery -- to change her breasts and tummy. It wasn't until she watched her daughter, Mikaela, as she played, that the epiphany surfaced: "I thought to myself, 'how can I teach my daughter to love her body if her mum can't?'" she said.

Instead of going under the knife, Brumfitt entered a fitness competition -- a grueling 15 weeks of strict training and regimented eating that left her enviably sculpted yet still miserable. "Achieving the 'bikini body' was a social experiment and having that body enlightened me, she told me. "I had arrived at this place where women want to be but I didn't feel whole; the emotional and spiritual aspects were missing."

Through that process Taryn came to understand that confidence and self-esteem stem from having a foundation of who you are and what your body is able to do rather than what it looks like. "We need to change the currency of beauty -- to value another human being based on their contribution to the world," she asserted.

When Taryn posted a "before and after" photo on Facebook (bikini body photo first and her post-contest, heavier figure, second) it struck a cord, garnering 100 million impressions -- a pivotal moment that led her to a highly successful Kickstarter campaign, created to raise funds to produce the groundbreaking, globally-focused body awareness documentary, Embrace, scheduled for release in 2016.

"Every city I traveled to, I just found another pot of gold, and even though I had a lot of scheduled and planned interviews, so many surprises happened along the way," she said, joy illuminating her face. "Body shaming and hating is a global epidemic. I've never met a woman who really owns who she is. It's rare. I ask a woman what she thinks of her body and she'll say, 'It's great. I love my body but...' There's always a 'but,'" she explained, disappointed.

In a world where advertisements become part of our subconscious and marketers hold enough metadata to know more about us than we do about ourselves, Taryn is approaching the Body Image Movement holistically: "It's no wonder we feel the way we do," she exclaimed. "The way that the media and advertisers prey upon insecurities. Women can't be what the world needs them to be when they're anchored down by all of these thoughts about themselves," she said. "The world doesn't need another diet; they don't work. We should never trust a four-letter word where the first three letters are 'D-I-E.'

Through the journey in producing the Embrace documentary, Taryn found herself both startled and baffled by the discovery that girls as young as 16 were contemplating facial injectables and women in isolated, low-population regions of the world were interested in pursuing extensive cosmetic surgery. Although she calls for all women to cherish their bodies regardless of their choice to modify it through surgical intervention, she also aims to bring awareness to the beauty obsession: "Why would we defy or fight something that's the natural evolution of being a human being?" she asked. "We really need to question that and start the conversation."

Taryn and I spoke the morning after she ran nine, blissful miles through Central Park in preparation for the Melbourne Marathon she aims to complete later this year -- another "bucket list" item soon to be checked off. "My body gets shamed for what it looks like -- I'm heavier than I've ever been, but with all of this running, my body is doing something it's never done in 37 years," she proudly explained. "But I don't have an issue with how I look now," she said. "It's been like a muscle -- I'm so strong in that sense now; I don't fall back."

A few years ago, Taryn's husband was attending social events on his own while she stayed at home, wading through the painful voices and making futile attempts to reconcile with the body she occupied. Today, she wants to convey one message: "For women to know they're not alone and maybe that will help them to feel they can go from hating their body to loving it," she said, affectionately. "Our bodies aren't ornaments. They're vehicles to our dreams."