My paternal grandmother, Esther Popelka La Seur, worked the floor in a sugar beet refinery, took in seamstress work, and grew large vegetable gardens to make ends meet. She grew up so poor that the family gathered wild greens to supplement their diet and gave her away at age 13 to earn her keep on a Montana ranch. My maternal grandmother, Jennie Kifer Lowry, was a high school valedictorian and basketball star in 1930 with a full scholarship to Montana State. She wanted to be a lawyer. Unfortunately, her family couldn't afford her room and board, and in those hard times, nobody would give her work to pay her way when "a man should have that scholarship." Jennie became an executive secretary to doctors and oilmen, working her whole adult life. My grandmothers were the daughters and granddaughters of ranch women who observed little distinction between their agricultural livelihood and the work of homemaking and childrearing. Between them, the two raised six children, among them my parents, the first college graduates in both their families.

For many women from working class and rural backgrounds, raising children while holding full-time paid employment, or working as a full partner on a farm or ranch, has been a source of pride and independence for untold generations. Married black women have always been employed outside the home in large numbers, and this is true for a large class of married white women as well. Stay-at-home motherhood never was the universal phenomenon it's often painted as today. Even in the 1960s, at the height of the trend, it represented less than 50% of mothers with children under age 15. The proportion has since declined by half. Current debates over mothers' employment obscure that important history.

My grandmothers' attitudes toward work and children transferred osmotically to me. When my first child was born, three days into my second year at Yale Law School, taking time off never occurred to me. I strapped that baby to my chest and walked back into class less than two weeks later, standing tall in the knowledge that I had not faltered in earning the family's first law degree. Would Jennie have backed away from this precious chance, with the prize so close? Throughout my education, I was driven by the fear that something would stop me before I finished. For a young woman from a family with no connections and thin financial resources, there is little safety net. Getting the degree, the job, the career -- these were my golden tickets, and I fought for them. My husband's capacity to support the family simply did not enter the equation. The lessons ingrained in me by my working class roots were all about self-sufficiency.

When my second child was born, I was running a small, struggling nonprofit I had founded. The demands on me were constant and overwhelming. I recall criss-crossing the country for funder meetings while so pregnant that climbing stairs was painful, then hauling my newborn through airports so that I could attend a White House energy meeting. The only way I could breastfeed successfully was to move my office into the same building as my son's daycare, to be present for his feedings. On one hand, it's unusual for a woman to have the power to move her workplace to meet her childcare needs, but on the other hand, I had given up significant job security and compensation to launch this entrepreneurial effort. It was a classic working mother trade-off -- and again, one I'd learned from my grandmothers, who created close-to-home and home-based income sources to keep the children near. The desire to fulfill their promise is a powerful motivator. Esther and Jennie are my ghostly companions in the corridors of power, their gnarled hands at my back, urging me to speak truth for everyone who can't.

There is no point in denying that I have been lucky -- beyond lucky, eerily blessed would be more accurate -- in a thousand ways that my grandmothers never dreamed. They worked as hard as I do, often harder, every day of their working lives and never saw anything like the rewards I've known. The current mommy wars do resonate with me. I want the best for my children and read widely to understand what that might be. I worry every day that I'm failing them somehow. But I cannot look back on my family history and feel anything but pride and satisfaction in following my grandmothers' path. They might well have chosen easier lives, if the choice had existed. Certainly, they would have enjoyed more time to rock their babies and play with their children. Instead, the path before them was one of duty in and out of the home, and they walked it with uncomplaining strength that still brings me to tears. 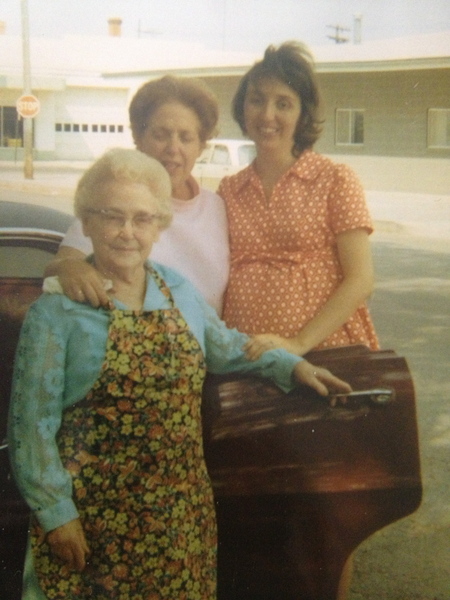 My great-grandmother, grandmother and mother while she was pregnant with me