Last week, my son and I snaked through the ticket holders' line and entered the theatre for the Saturday matinee of Hamilton. You may have heard of it: sensational new hit about the founding fathers, written by Lin-Manuel Miranda, mixing styles and races and ideas in one glorious three-hour extravaganza, garnering sixteen Tony nominations. This Mother's Day treat for me was our son's biggest Christmas surprise, the sweetness of gift increased by five months of anticipation. Glorious rapture as long as I blocked out the cost of the tickets.

The fact is that I didn't want to like it as much as I did--I hate hype. We had all heard Lin-Manuel Miranda give the commencement address last May at Wesleyan University when our oldest daughter was graduated from college, way back before Hamilton fever gripped us all. I knew then that I had to see the show--Lin-Manuel was so audacious and appealing, not unlike the hero of the musical. Besides, it's no secret that I love theatre. I've spent my life making plays with teenagers and younger children; I've spent decades teaching drama and going to shows, directing plays. And, I fell in love--hard--with Hamilton. No cynic here, I was smitten. There was a moment when I thought: "Lin-Manuel Miranda is a genius. This kind of verbal gymnastics must have been what it was like for the Elizabethan crowd when Shakespeare began inventing words to get the rhymes and rhythms he needed."

Atticus, 11, who knew the soundtrack by heart before we went, pronounced to me some months ago: "Oh, I get it, Mom. When Hercules Mulligan says, 'And get the f-- up again,' it's because he needs that syllable--the f-up--to make the meter work." Yes, sir. That is exactly right. Profane? You bet. An opportunity for learning about meter? Absolutely. My son was transfixed at the matinee, glued to the action, carried away by the music. I snuck a furtive glance or two at him: he was as rapt as I. It was glorious. And in the days since, I've been thinking more about the story, why it resonates, why it speaks to me as a mother.

I love a good underdog, and Alexander Hamilton is, in this characterization, a brash, ambitious orphan underdog with guts and chutzpah. But I love, too, that it's a story about how families are strained by a parent who works too hard. "Why do you write like you're running out of time?" the cast sings. He can't stop himself. He doesn't want to. His single-mindedness, however, doesn't work so well for him as a father--or as a husband. And, while I do not worry about being approached on a hot summer's night by a stranger who wrecks my marriage, I do recognize in myself some version of Hamilton's dogged determination to work incessantly. It's hard for me to turn off my computer, my phone, my sense of obligation to the school I lead. True, I'm not inventing a treasury system for a new nation, but I still shifted uneasily in my seat, recognizing how tempting it is for me to mutter "Yes" to my daughters on the phone while I am secretly reading the never-ending email. Could this working mother share a little bit of Hamilton's less admirable qualities?

"Look around. How lucky we are to be alive right now," sings his wife, but Alexander sees only what he has not yet accomplished, only the mountains left to climb. He won't take time off to go to the lake in the summer. "Take a break," Eliza urges, but Alexander won't, even when Angelica, his other love, arrives from England. The good news is that I have every intention of taking a break at the end of June and heading right for a lake. Hamilton is focused, ruthless in the pursuit of his dreams for the nation he helped to create, but his zeal comes at the expense of his marriage, his family. It felt, this morning, as I sang along to the soundtrack while I huffed on the treadmill, like a cautionary tale.

On Saturday, I cried for the strain their marriage endured when Alexander not only strayed, but also published articles about his affair, when Eliza took herself out of the narrative, when their son Philip died in the duel. I wept for Hamilton and Eliza; I kept crying through Unimaginable. I wanted them to find their way back to each other, but even as they did, I thought, "He won't change. He can't." The duel with Aaron Burr felt inevitable. And, then I cried because Eliza was alone for fifty more years. I do not want to be alone like that. I do not want to be unable to change, to stop what I'm doing in order to be present.

After the show, Atticus said, "I know Burr is the villain, so why does he have such a high voice? I think he should be angrier." We talked about the idea that it is Burr who tells the story; in this version, he is Horatio, in a sense, to Hamilton's Hamlet. Atticus was puzzled by Burr's reticence, by his unwillingness to take a stand, worried about what happened to Burr afterwards. He understands Hamilton is a musical, that playwrights take liberties, that much of history is interpretation. I love that he is still asking questions, puzzling out the bits of the story that eluded him.

The next day, Atticus texted his friend, "Talk less. Smile more. Don't let them know what you're against or what you're for." Good lyrics. Good advice. I, too, am chewing on the story, the themes and messages. I am listening to the lyrics with new ears, now as a mom, a wife, the leader of a girls' school. Lots of lessons. Duels are stupid and, thankfully, no longer a staple of American culture. But, that worry aside, I, too, yearn not to throw away my shot, to know when to raise a glass to freedom, to ideals and camaraderie. I want to be in the room where it happens, to believe in my own capacity to shape the institution I lead, less daunting than creating a nation, certainly, but my work all the same. Mostly, I want to remember to pay attention, not to waste the time I have with my son, my daughters, my husband, my extended family. Plays end, but their impact can pay out dividends for years. I think Hamilton would chuckle that my investment in his story is earning interest. Wasn't that the whole idea? 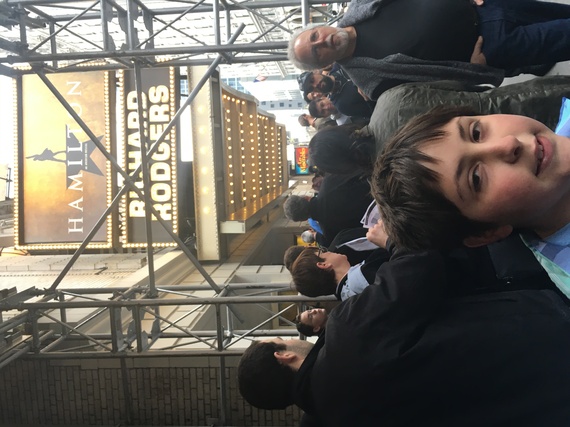