Without labor nothing prospers. -- Sophocles

As Labor Day approaches, with the last big grilling feasts of the year, I can't help but think about my favorite part of a mixed grill -- the sauce you put on top! Every country seems to have its own take on this critical accompaniment and they're all delicious. My dear friend Nestor Almendros, the great Cuban cameraman, used to tell me that the only reason I wanted to go to a Cuban restaurant was to eat the Argentinean chimichurri sauce which I managed to finish bowls of with the appetizers. And the Italians have their delicious green sauce or Salsa Verde which goes with meat or fish, depending on how you make it, and completes every platter of grilled food for my family. The French aioli is an acquired taste but if you are making bouillabaisse, there's nothing like it. And here in the United States, we have an exhaustive list of barbeque grilling sauces. My family favored a Texas barbeque version that my mother said came from John Wayne's recipe files. I don't know about that, but it is mighty good.

Promise me you'll never forget me because if I thought you would I'd never leave. -- A. A. Milne

I've been told that I can't get through one of these blogs without talking about someone I've lost in my life and it looks like this one is no exception. My father's birthday was September 2nd so it often coincided with the Labor Day weekend and of course, there are lots of food memories from this time of year. Daddy loved lobster, so the traditional grill was accompanied by lobster which he consumed with a gusto and completeness that I have never seen before or since. No portion of that crustacean was left unappreciated. We also had to have chicken wings with that aforementioned Texas barbeque sauce. Again, my Dad could consume the entirety of a crispy chicken wing and I must say I have followed in his footsteps. Happy Birthday, Dad.

However, of all the sauces I've ever tried, my favorite is the one that our good friend George Duran, host of TLC's Ultimate Cake Off and Food Network's Ham on the Street, makes. George grew up in Venezuela where they make Guasacaca Sauce. It's based on avocados and has the tangy addition of vinegar and the sweet addition of bell peppers. It's incredibly easy to make and tastes great on absolutely everything - meat, fish, vegetables, corn, potatoes, and anything you put on the grill. I have to make double batches and everyone asks for the recipe. So this Labor Day, expand your menu and introduce your family and friends to George's Guasacaca Sauce. They'll be so glad!

This recipe and many other family and travel favorites are available on my website, DishandDine.com. Stop by and become part of our grass roots global food community! 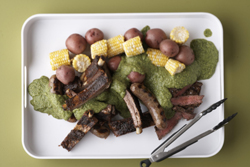 Description:
Here's the plan: Get yourself invited to the next neighborhood barbecue. Make a batch of my guasacaca sauce and tell everyone to drizzle it over everything -- meat, chicken, fish -- even vegetables and potatoes! Bask in their immediate adulation, as you become a neighborhood hero! (Then tell everyone to buy my book.)

Ingredients:
1 medium onion, roughly chopped
2 green sweet peppers, seeded, deveined, and roughly chopped
2 ripe avocados, peeled and seeded
2 cloves garlic
½ bunch fresh parsley leaves
½ bunch fresh cilantro leaves
⅓ cup red wine vinegar
1 tablespoon salt, or to taste
¼ teaspoon black pepper
1 cup olive oil
Preparation:
Put everything except the olive oil into a food processor and process until mostly smooth. Add the olive oil in a stream with the processor running and process until smooth. Let stand at room temperature for at least 1 hour for the flavors to blend. Taste and adjust seasoning. Serve sauce at room temperature with meats, fish, or vegetable chips. If made in advance, store, covered, in the refrigerator, but bring to room temperature before serving.