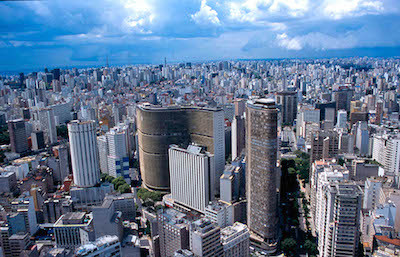 IN THE LAST two months, I've spent time not just in New York but in two other megacities that, while a hemisphere apart, are actually quite similar in "ecocultural" terms, São Paulo and Cairo. The home of 20 million and 18 million souls, respectively*, each city is epically scaled and massively dense not only with human beings but with human interaction and cultural exchange. In Brazil, the interaction feels primarily lateral to me, spanning the country's vast territory, as peoples of diverse cultures and backgrounds, descendants of natives, slaves, and immigrants alike, mix in a free-wheeling way, while in Egypt the interaction feels more vertical in a chronological way, as people go about their lives on sites that were already conspicuously civilized five thousand year ago.

Among the aspects that São Paulo and Cairo have in common besides their enormity, though, is their prominent position as rich cauldrons of 21st century culture. In each city, you feel a little bit like you're occupying a near future in which the nation around you belongs to what we used to call the "first world"-- even if a short jaunt outside of either São Paulo and Cairo lands you squarely in what we used to call the "third world." Going back and forth between these constructs, and switching between the modes of thought appropriate to each, as many do on a daily basis in Brazil and Egypt, demands something philosophical of an individual whose city feels--as both São Paulo and Cairo do to me--like it's being simultaneously built up and pulled down. And this going back and forth--as in the primal pond where mutant molecules that heat up and cool down in diurnal rhythm can finally lead to life--is a form of mental acrobatics that the artists I talk to in both countries often remark upon. They talk about balancing their day-to-day experience of urban mayhem with the exhilaration of the rapid scramble into a future their leaders hope will be "better," and trying to hold on to the memory of the past while embracing the "improvements" in store. 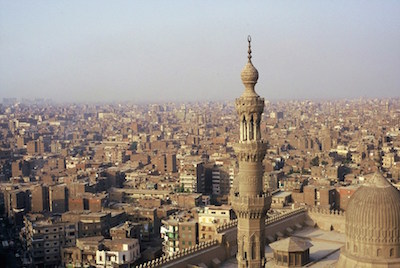 Artists are the ones who best articulate the velocity and directions of cultural evolution, of course--which is one of the reasons why looking at art is so important to me. But any of us can feel the general currents of this evolution in everyday experience--in, say, hearing Arabic being spoken in Cairo and realizing that Portuguese contains a huge number of words from Arabic roots; or in enjoying a meal of Lebanese cuisine in São Paulo, where population growth in recent years has drawn sizably from a North African diaspora. (The fastest growing fast food chain in Brazil in not McDonalds or Popeye's, by the way-- it's Habib's, which serves Middle Eastern cuisine.)

More and more, when I stop in New York in the midst of my travels, I feel immersed in a haze of wealth that serves to blur a view of the coming world. The smug assumption about the future among many in Manhattan's richest neighborhoods is that "it's here and we're it." But no. In many ways São Paulo and Cairo are surpassing capitals like New York, Paris, and London in offering not only a view but a first experience of the future. Which is why I have become so much more mobile in recent years. Being the citizen of a "cultural capital" these days is less a residential thing than a conceptual one.

• according to 2012 World Atlas census figures