The International Center for Academic Integrity has launched a contest that asks high school and college students to answer a provocative question: "What Would It Be Like To Live In A World Without Integrity?" The best response -- video or poster -- wins an iPad Mini.

Unfortunately, it might not take too much imagination for most students to envision such a world. To a large extent, for them, it's already here. 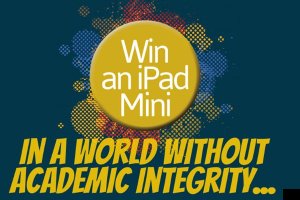 Teaching What "Cheating" Is

Statistics show that more students in high school cheat than ever before. With my own students, I've seen that many aren't clear on what constitutes cheating. In a discussion about integrity, for example, a student argued that faking lab results wasn't cheating, because "cheating is just when you copy from someone else's test."

When I posed the hypothetical situation of a runner taking an unauthorized shortcut, the same student thought that was "just smart." He was surprised to find that many of his fellow students disagreed with him. I, on the other hand, was alarmed to see how many did not.

As a Boomer who remembers, I know better than to settle for anything that blames "the younger generation" for failures of morality. That's too easy and too common -- something every aging generation has done since the Roman Empire. Better to look at the examples we have set for them and wonder why we didn't see this coming.

Too Many Role Models Cheat

The litany of examples of successful cheaters is long. From the investment bankers who made a fortune (and suffered no consequences for) selling worthless securities, to the South African swimmer who argued that his cheating was justified because it was prevalent in the sport (and got to keep his Olympic gold medals), the modern world is full of role models pointing in the wrong direction.

In the same classroom conversation last week, a water polo player explained that pulling on the bathing suit of an opposing player is against the rules, but it's commonly done, because the referees don't see (or don't call) the offense. When asked whether he thought that counted as cheating, he had to think for a moment... then agreed that it did. But that doesn't change how the game is played.

The mandate to succeed has overcome the concept of fair-play in so many worldly endeavors, it shouldn't surprise anyone when a student, like the one writing for a California high school magazine last fall, writes, "All this pressure for high grades overshadows the actual educating part of education, and if kids don't have an incentive to learn, how can they be expected to choose learning over cheating?"

In the last six months, we've seen that same reasoning from the cheaters whose job it was to launch the nation's nuclear weapons. In a widespread scandal at Montana's Malmstrom Air Force Base, nearly 100 officers had improper access to test answers, and an Air Force investigation "found a culture of cheating throughout the missile community."

As stories like this make headlines, the generation dubbed "the Millennials" already knows what it would be like to live in a world without integrity. A recent survey by the Pew Trust found that this group of 18-to-33-year-olds "have emerged into adulthood with low levels of social trust." The researchers attributed this finding to the multiracial nature of the generation, but there may be a much simpler explanation: They know better!

They have watched (or participated) as colleagues have succeeded by cheating. They have seen the lines between proper and improper behavior blur, as success takes on more objective measures -- what grades, how much money, which car?

Perhaps without intending to do so, we have raised a results-oriented generation, and now find ourselves wondering, "What went wrong?"

Ultimately, it doesn't matter what went wrong. The important question now is, how do we fix it? And the one area of agreement is that there are no easy answers. No doubt, this is a problem the Millennials themselves need to fix, if they are to have any hope of being able to trust that the contractors they hire to build their houses, the pilots flying their planes, and the doctors operating on them didn't cheat to get their licenses.

In much the same way that earlier generations locked onto issues like civil rights or the environment and made them their own, the Millennials are going to have to do that with "integrity." We can't afford simply to hope they succeed, we need to provide better examples, so that it will require a lot of imagination to answer the question, "What Would It Be Like To Live In A World Without Integrity?"