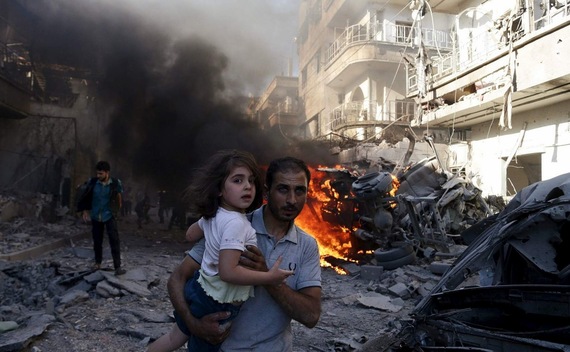 The violence in Syria has displaced 6.5 million people. (Freedom House/Flickr)

As an alarming majority of Americans stand ready to turn away thousands Syrian refugees, it is worth noting that the United States has been facing a refugee crisis for a long time, we have just been calling them undocumented immigrants. Any talk of rejecting refugees is an abdication of our responsibility to address the fires we have started around the world.

It should go without saying that the specifics of the Syrian conflict and the state of current affairs in Mexico and Central America are, of course, vastly different. But there are indeed parallels between the Syrian conflict that is propelling a desperate population's exodus and the violence that renders much of Mexico, Honduras, El Salvador, and Guatemala into some of the most dangerous terrain on the planet. In both scenarios, the peril and sheer carnage have sparked a refugee crisis. Additionally, a large swath of the public and policymakers in the country that both benefits the most from and contributes the most to these conditions, the United States, forsakes its moral responsibility to pursue a humane course of action.

These seemingly disparate phenomena are linked through us all. What the American public must come to terms with is that the American way of life and standard of living is buttressed by an international policy of neocolonialism in the guise of anti-communism, the War on Drugs and the War on Terror. The policies produce or worsen countless conflicts and leave millions landless.

The United States' War on Drugs has had monstrous consequences in Mexico.

Mexico's participation in this "war" has served as a political justification for repression and unbridled state violence. While state-sanctioned violence against citizens is not new to Mexico, the War on Drugs and the U.S. role in funding, participating, and supplying arms has pushed it to new highs as U.S. and Mexican agencies work both with and against cartels in an often-contradictory war.

As the journalist Roque Planas has pointed out on numerous occasions, the policy has made certain regions unlivable. Just last year, 43 teachers in training at Ayotzinapa Teachers' College participated in a protest against discriminatory hiring and school funding in Iguala, Guerrero, Mexico. The protest was met with an unreasonably high level of force, and the 43 were arrested, handed over to a gang, and have since disappeared. With two sets of remains identified, it is presumed that the rest have also been killed. This is just one example of officials utilizing relationships fostered by the War on Drugs to further political aims, maintain an oppressively unequal society, and repress the rights of citizens to redress their grievances.

As the U.S. backs a policy largely dictated by force, cartels, gangs, and government forces war with each other -- innocent civilians are often caught in the crossfire or find themselves the direct targets of violence and coercion. Between 2006 and 2012, more than 60,000 people were killed in drug-related violence, including an alarming number of journalists killed by the cartels as well as law enforcement.

Less known to some, the War on Drugs extends further south into Central America. Going back to the Cold War, the United States has played a considerable role in eviscerating much of Central America's capacity for democracy and political stability. Back then it was in the name of anticommunism; today drug trafficking is the target.

To blame the United States for all of the region's problems would be reductionist -- of course local populations and political players have agency of their own -- but to deny the sway of the region's only superpower would be disingenuous. Today, Honduras, El Salvador, and Guatemala are among the most dangerous places on the planet and the U.S. has a lot do with it.

A good place to look is Guatemala, a country with a history steeped in violence that became the United States' first major foray into Central America. In the 1950s, John Foster Dulles, a former lawyer for United Fruit (a behemoth of a company and predecessor of today's Chiquita Banana) was Secretary of State, and his brother, Allen Dulles, was head of the CIA. At the time, the company had a monopoly over the majority of Guatemala's agricultural land and a vested interest in maintaining the status quo.

Guatemala faced extreme inequality, as 2% of the population owned 72% of the land. The landowning aristocratic families and American interests represented by United Fruit colluded to perpetuate a feudal society. By the early 50s, the democratically-elected government of Guatemala, headed by President Jacobo Arbenz, sought to implement reforms, many of which were styled after President Roosevelt's New Deal. To address the disparities in his country, Arbenz's reforms included the appropriation of idle farmland owned by multinational companies and its redistribution to rural peasants. The aim was to raise the standard of living for Guatemala's poor. In the hands of the multinationals, the idle land was a means of insuring the monopoly over the banana trade by limiting the number of producers. In exchange for the appropriation, the Guatemalan government offered to compensate United Fruit for the value of the land - idle land that based on the company's tax records, was valued at little over a half-million dollars. United Fruit wanted 32 times that, a bounty for social justice that the Guatemalan government would not pay.

What happened next is the stuff of history and poorly-scripted political thrillers. The Dulles brothers persuaded the Eisenhower administration that Arbenz was a dangerous Communist. Despite no concrete evidence that Arbenz was a Soviet Agent or a communist, the CIA and right-wing factions in the Guatemalan armed forces led a coup that deposed the president. This event shattered the country's nascent democratic institutions and led to decades of military dictatorship, as well as a bloody genocide on the native population, and a civil conflict that resulted in over 200,000 deaths. Arbenz was exiled, destroyed and despondent. He died in a bathtub in Mexico. At the cost of death, despair and oceans of blood, United Fruit got its land back.

Today, experts say Guatemala is a dangerous place where decades of military rule has created the conditions for a shell government and an environment in which only the use of force generates stability. Guatemalans are fleeing both the drug-funded gangs that have filled the vacuum in much of the countryside and the military that protects the vested interests of the country's elites.

The example of Guatemala is not dissimilar from that of neighboring El Salvador and Honduras, both facing degrees of state-sanctioned and gang violence of tremendous proportions and populations desperate to flee them. 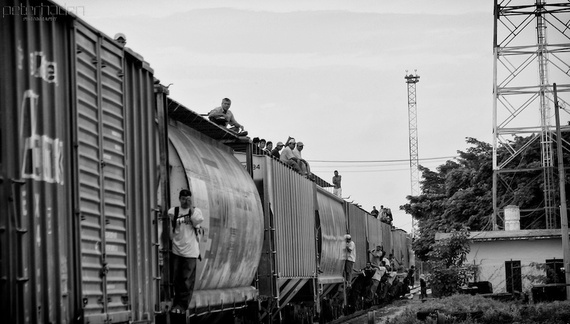 The Syrian refugee crisis requires that we look elsewhere in America's arsenal of policy, the ceaseless War on Terror. Much like the violence in Guatemala, the chaos in Syria is directly linked to vested U.S. interests and foreign policy. Today, a bulletproof argument can be made that the United States' ill-advised invasion and occupation of Syria's neighbor, Iraq, was about controlling oil -- not terrorism. The consequences of this invasion played a decisive role in spurring the Syrian conflict.

Once the Iraqi regime fell in 2003, the complexities of the country's internal politics were unravelled before the eyes of the world. As the occupying force, the U.S. played a considerable role in defining the terms. To summarize, the power vacuum laid the groundwork for the rise of violent competing interests. It was this ecosystem that gave rise to al-Qaeda in Iraq, an organization that would soon be known as ISIS.

Declassified documents indicate that the United States tried to utilize al-Qaeda and other extremist organizations in Iraq as tools toward regime change in Syria, with the long-term aim being to exploit ethnic and religious factions, polarize regional politics, alienate Iran, and maintain U.S. geopolitical hegemony in the region.

A World Without Refugees

Both the War on Terror and the War on Drugs have created larger problems than they have solved, and have been exploited for aims other than the stated objectives of stopping acts of terror and the flow of drugs. Many experts argue that they have exacerbated both situations. And while the situations in Syria and south of our border are not perfectly analogous, our reaction to both illustrates a shameful stance on global humanitarian crises.

If we are to address these pressing issues and prevent them from recurring, we must face the role we play in creating them. The violence and wars that bring refugees to America's doorstep are the direct byproduct of global capitalism, and the United States' failed policies have perpetuated the kind of exploitation that fosters the conditions for crises.

In our interconnected world, where information flows at lightspeed across the globe and where multinationals extract valuable resources from every corner of the planet, enriching the few at the expense of the many, the conversation around refugees must evolve. The emphasis is too often on what attracts them, what they bring with them, and what risks they pose but the most important question should always be "what are they fleeing?" Perhaps the answer lies in reevaluating our perception of borders and the policies that create the refugees we so readily seek to turn away.