Since the 1999 court case that required Charlotte Mecklenburg Schools (CMS) to end busing because the schools had "eliminated the vestiges of past discrimination," the district has primarily assigned students to schools closest to home. This practice results in extreme socioeconomic disparity between schools, which CMS attempts to counteract by spending more money on the low income schools.

Between 2000 and 2010, the Wake County Public School System (WCPSS) was nationally recognized for socio-economic school integration, and, before that, racial integration. Although this practice has since ended, many of the effects linger.

In the 2013-2014 NCDPI School Report Cards 40 percent of CMS schools were rated an "A" or "B" compared to 50 percent in WCPSS. 29 percent of CMS schools were rated a "D" or "F", compared to just 11 percent in WCPSS. According to a 2015 New York Times report, Mecklenburg County currently ranks second to Baltimore for "big counties worst for income mobility for poor children."

This is the story of my experiences teaching at two vastly different schools and the systemic problems of socioeconomic inequalities I witnessed:

Despite these supports, I worked 12 hours a day to complete the most basic parts of my job and working conditions were far below what I would consider professional. I witnessed an unfathomable amount of violence and on more than one occasion felt personally unsafe. There was a culture of fear for everyone involved: fear of theft, fear of violence, and fear of multiple kinds of abuse. When teachers were absent, students were most often covered by stretching current staff because substitutes did not want to work in the unpredictable and sometimes hostile environment. On these days, teachers gave up their planning period and worked unpaid overtime at home. When I didn't have to cover other classes, I spent most or all of my planning period writing discipline referrals, calling parents (often unsuccessfully), finding an interpreter to call parents, and wrestling with the copy machine. Yet as hard as we worked, we perceived, at best, miniscule improvements to students' lives.

Now, I spend my planning period almost exclusively planning engaging lessons. I feel appreciated and I see the difference I make. I've only written one discipline referral and covered one class this year. In a year at the first school I spent over 180 hours performing daily non-instructional duties necessary to maintain order and help keep students safe. This year I expect to spend just 53 hours on such duties. There were similar discrepancies between required attendance at after-school events. When I talk with another teacher that left the first school the same time I did, she describes her feelings of guilt that prevented her from leaving earlier as "masochistic."

Many believe that we need to attract more highly qualified teachers to low-income schools -- I disagree. I worked with highly-qualified, brilliant and passionate teachers and administrators who were relentless in their efforts to achieve student growth.

The real problem is keeping any teachers at all. Research shows low teacher turnover increases student performance. Turnover at the first school was around 50 percent. Less than one year later, of the administrative staff, only the principal remains. My quality of life and sense of professional achievement at the first school were so low that I doubt I would have stayed for any monetary incentive.

In Part 1 of a recent segment on the radio show This American Life entitled "The Problem We All Live With," host Ira Glass talked with Nikole Hannah-Jones, New York Times investigative reporter, about dozens of strategies school systems like CMS are using to help failing schools. Here's Glass:

What she noticed was that it never worked. I mean, like, never. The bad schools never caught up to the good schools. And the bad schools were mostly black and Latino. The good schools were mostly white. And sure, there might be a principal here or a charter school there who might do a good job improving students' scores, but even there, they were just improving their student scores. The minority kids in their programs were still not performing on par with white kids. They hadn't closed the achievement gap between black kids and white kids.

So if all these programs aren't working, what does work? Nikole continues:

I find there's one thing that really worked, that cut the achievement gap between black and white students by half... [school] integration... But instead, since 1988, we have started to re-segregate. And it is at that exact moment that you see the achievement gap start to widen again.

I couldn't fully appreciate how lucky I was to be educated in an integrated system until I worked for a segregated one. As a student in integrated schools, I learned lessons much more important than any content found on a test. Unfortunately, in the six years since the end of socioeconomic integration, WCPSS is trending towards segregated schools. The 2014-2015 NCDPI School Report Cards look more like those of CMS.

In Part 2 of "The Problem We All Live With," reporter Chana Joffe-Walt described the community engagement necessary to achieve school integration:

There are only a few places in the country that have seriously committed to school integration over a long period of time. Louisville, Kentucky is one; Wake County in North Carolina; those are the biggest. And in each case, something like this right here has occurred: a public reckoning seems to be a required step; some sort of long process by which the gap between two unequal systems is made very clear to the people who are not paying attention.

I share my experiences not to disparage the valiant efforts of low-income schools but rather to bring awareness to the larger systemic problem. I share because the personal time it took me to write this article did not exist a year ago. I share because my heart breaks to watch WCPSS travel down the path towards segregated schools and because I've seen where that path leads. It's time for a public reckoning. We know from anecdotal evidence and quantitative data that separate is not equal and does not work. Our teachers deserve safe and professional working conditions. Our students -- all of them -- deserve a safe learning environment and a high quality education.

Add my voice -- an informed witness from the front lines -- to the growing chorus. Wake up, Wake. Pay close attention. You are headed the wrong way. 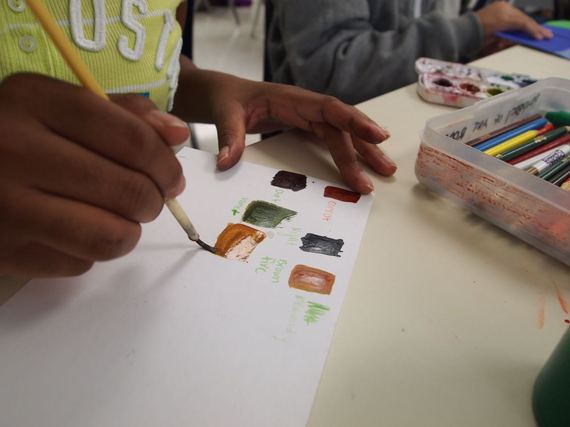