When Rachel Held Evans's husband, Dan, woke up one Christmas morning, he found all of his presents addressed, "To Master, from Rachel."

"I had to call him 'Master,' as the Bible says wives should submit to their husbands," Evans told The Huffington Post in a phone interview. "He was as weirded out as I was. It seems like it should be a turn-on, but it really isn't."

A 34-year-old evangelical Christian from Dayton, Tennessee, Evans got the idea to live her life as the Bible said women should in order to challenge the idea that anyone actually does. "A Year in Biblical Womanhood," her new book, chronicles her experience and raises questions about the standards that women are held to in evangelical communities. Evans says she took a page from A.J.. Jacobs's "The Year of Living Biblically," where Jacobs lived a year according to the bible's more general instruction on how to be.

But for Evans, she hopes to highlight how living biblically differs for women.

"I grew up in the evangelical Christian subculture and the leaders in that culture would always raise 'biblical womanhood' for the ideal of how women should behave," Evans said, "They raised it for when explaining why women should be forbidden to teach in church, for not having careers. It required that you work from home, raise a family, and stay away from leadership roles."

In her tongue-in-cheek experiment, Rachel practiced a different proverb for every month. In addition, one month she took direction from Leviticus 15, which states, "'When a woman has her regular flow of blood, the impurity of her monthly period will last seven days, and anyone who touches her will be unclean till evening."

"During my period and seven days after for a total of 12 days, I was 'ceremonially unclean,' so that meant I couldn't touch any men or my husband for those 12 days. I couldn't handshake, high five, or hug anybody," said Evans, "I couldn't even dance with a man."

Incidentally, Evans and her husband had to attend a wedding that month.

"People would ask us, 'Why don't you guys dance?' and I'd have to say, 'Because I'm on my period!' It was a little bit like being caught in the tampon aisle for 12 days."

Because Corinthians 11 says that, "If a woman does not cover her head, she should have her hair cut off," Evans covered her head and didn't trim her hair for a year.

"It looked like small animal had died on it," describes Evans. "Corinthians says, 'It is a woman's glory if she has long hair.' I think if the Apostle Paul met me he wouldn't have said that."

On Evans' site, there are various videos of her in action. And though Evans says that she did the experiment playfully, it was meant to bring attention to a larger point — that there are more ways to be a woman of faith than what some evangelicals have selected from the Bible.

"I hate that the Bible has been used as ammunition [against women]," said Evans, "It blows my mind."

Religious groups opposed to Evans' interpretation of the Bible have formed in recent decades. The Council on Biblical Manhood and Womanhood organized in 1987 to "address concerns over the influence of feminism" in the evangelical churches and that "men and women are equal in the image of God, but maintain complementary differences in role and function."

"Power is not something anybody lets go of easily," said Evans, "I think lot of people have benefited from the idea that the Bible restricts women in their roles."

"The question is — are we going to use the Bible to silence women?" she added.

The book has already received mixed feedback from the community. One reviewer accused Evans of "making a mockery" of the Bible with her experiment, adding it seemed wrong of her to do it at all. Another said that Evans' point may only reach those who already agree with her.

Earlier this year, Evans made headlines when one of the largest Christian bookstores in the country, LifeWay, announced that it wouldn't be selling her book for what some believe is her use of the word "vagina."

"There are a lot of evangelicals that aren't happy with the book, I think because I'm calling them on their bluff a little bit," Evans said, "I think some people would rather not talk about [biblical womanhood] at all."

Check out photos from Rachel's experiment: 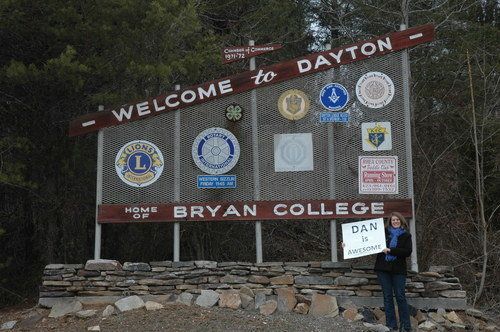