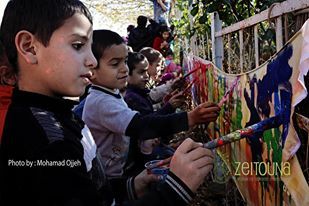 She wouldn't move to join her classmates for recess until I took some chips from her bag of Lay's potato chips.

The 4th grade girl exiting her class for a 15-minute break at the school for Syrian refugee children, Salam, in the border town of Reyhanli was not unlike most children we encountered that day. We, the team of 30 plus volunteers (also known as "mentors) in the Zeitouna winter program for displaced Syrian children, would come to learn the unparalleled generosity of children that had so little. Many Zeitouna volunteers shared similar stories of children offering them their snacks. One girl knit a doll for a member of the digital photography team. A young girl, Heba, who showed up to school on Monday with sandals and no socks on a near freezing day (the school has no heating system or adequate insulation), visibly malnourished, returned on Tuesday with soccer ball key-chains to give to the instructors of her arts & crafts (puppet-making) workshop. What she did not know is how a group of us conspired to find her proper footwear just the day before.

The program, a weeklong series of workshops for one thousand children from first grade to ninth includes journal writing, dental hygiene workshops, tooth cleaning (they have even been extracting around 100 teeth a day), literature courses, Arabic calligraphy, puppet-making, mural art, canvas painting, digital photography, soccer clinics, commenced this Monday. This particular Zeitouna mission is composed of several teams: a dental team from the states who transported all their equipment to offer dental cleanings and tooth extractions for over a 1000 children and their teachers (including dentist chairs), APTart muralists and painters from all the over the globe with the aim of completing a mural covering the entire school building by week's end, a digital photography team from Egypt, a documentarian and a creator of a children's game (Rory's Story Cubes) both from Ireland, Zaitoun wa Zaytounah children's magazine co-founders from Saraqeb (city in Northwest Syria), and five translators from inside Syria (mostly Idlib, Aleppo and Afrin). 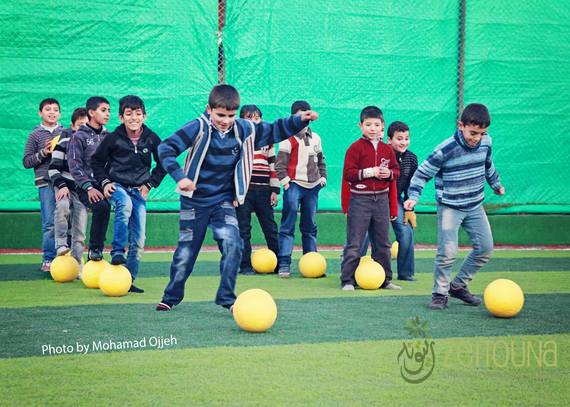 Salam, a school established in October 2012 by Canadian-Syrian Hazar Mahayani (who Zeitouna co-founder Kinda Hibrawi affectionately refers to as "the Syrian Mother Teresa") to educate the children in the area, is a refuge for children who would have otherwise encountered the common fate of my many displaced Syrian children in surrounding countries: a protracted and indefinite disruption from formal education. Because of the lack of resources -- namely space, funding for the teachers and staff -- students rotate 3 shifts a day of 3 hours of class (each grade level thus receives 3 hours of schooling a day). The shift system accommodates a growing population of children arriving in the region as their families flee Syria, while at the same time tenuously sustaining a direly under-funded school that heavily relies on sponsorship from teachers at its sister school in Montreal, Canada

Conceptually Zeitouna, which was originally established in March of 2013 and ran its pilot program, a summer camp in Atmeh (a IDP camp inside of Syria) last June, is primarily committed to providing Syrian children a reprieve from the totalizing experience of war; a chance to play (we use the hashtag #Play4Syria). Also novel in the world of relief programming, Zeitouna is resolutely opposed to "handouts,"and instead focuses on fostering a mentorship program between volunteers and students and teachers. Only after the end of the program, after successfully participating in the aforementioned workshops, students will receive equipment used throughout the week: digital cameras, Rory's Story cubes, soccer balls, dental hygiene kits and other workshop items.

Another goal of Zeitouna's is to get beyond the "refugee script." Zeitouna Co-founders Kinda and Lina Sergie prepped us Sunday to expect the students, who we would be working with, to be well versed in a script of political sloganeering, heart wrenching stories and even masters at transforming a jubilant smile into "the sad refugee face." It is all these children have been expected to be for foreign journalists and aid workers. In that same fourth grade class, when one of the students overheard I was from the states, she motioned for me to come closer, it seemed she had some essential information to tell me: "You're from the US, right? Obama was suppose to bomb Bashar, but at the last minute he decided not to." I could have been astonished by her political aptitude, a young girl likely parroting ambient household conversations. But, we wanted to penetrate this narrative and others like that that consumed these children's daily lives and instead develop "perduring connections," as one volunteer aptly named it.

This particular child took a quick liking to me, testing out her English at one point declaring "I love you" and rounded up most of the girls from class to play an Arabic version of ring around the rosy, "Ya warda, ya warda." When they learned that we were in fact returning everyday this week, their enthusiasm was palpable: it seemed as if they expected people to come and go, and rarely to stay (although grateful for the week of activities, the young girls definitely tried to convince me to stay with them beyond the planned week).

What is stunning, and especially difficult to digest, is the pronounced stoicism and emotional detachment griping the children's narratives about a family member's passing, an expected coping mechanism for PTSD and lingering chaos. In writer and novelist Robin Yassin-Kassab's storyboard writing course, a young girl, adamant about sharing her story, stood at the front of the class to explain the images and text inserted she drew and wrote in each square. She nonchalantly pointed to one square with an image of her martyred brother and quickly proceeded to the next square, an image of a brother who lived. I'm still struck by her almost emotionally numb, matter of fact delivery -- perhaps she knew that there was nothing unique to her story; she must have registered the losing a loved one to war as a common place occurrence.