In case you didn't already know, we just hit our halfway mark. Most of you have followed along enough to get an idea of where we have been, what we have been doing and how awesome everything has been! Yes, everything about this is awesome and the pictures you see us post mean that everything is perfect. We don't deal with barely making busses, losing money on cancelling flights, being afraid for our safety, stressing about QFYC and not being in touch enough with people back home, being better about our budget, not fluently speaking the language and the list goes on. In case you couldn't guess, that couldn't be further from the truth. Those things mentioned above are just a couple we go through each day.

Now it's time for me to get vulnerable.

I'm Pete and I'm a co-founder of Quarter for Your Crisis. My life has been pretty cushy to put it lightly. Raised by a good family, did well in sports during high school, had good opportunities in college and took full advantage of them, have an incredible support group of friends, moved to New York after college and after a year in a half had what some might call a dream job - pharmaceutical sales. My car and gas were paid for, my salary was high, my 401k was matched, EZ pass was great, most of the time lunch was free, bonuses were plentiful and work-life balance was one that people would envy. You get the picture.

Now after a year of working for a Japanese Pharma Company, I decide to quit. Throughout the year I worked on a plan to travel the world which ultimately shifted to traveling through the Americas below us. Jordan and I also launched a blog during this time and things started to change. At the end of 2014 I quit (after saving those healthy bonuses) to travel for four months with my beloved Jordan Dansky. The idea was not just to see the incredible things that the world has to offer but also to interview Millennials from different countries and cultures who are going through a similar time period of their lives when they just want to figure it all out.

Cutting to the chase: I did what everyone wants to do. Save up. Quit. Travel and help others while working on your own business. The dream, right? Right. What comes along with this that you don't see in the travel posts or #nofiltered pictures of a Marine Iguana on the Galapagos?

The funny thing about this is that QFYC was created with a mission to help people solve their fears by facing them head on. While I've always fully supported this and understood it, I didn't have as a good of a grasp on what it really means to face a fear until I began traveling.

I've had some of the worst anxiety in my entire life due to flying. Perhaps it stemmed from a tough flight last year or maybe it comes from flying to places that I've never been to or maybe it's a control issue. Whatever the reason, the anxiety started the minute we left and didn't stop until we cancelled part of our trip and decided to start bussing to cities. We have now spent a lot of time in buses: an 11 hour bus, a 15 hour bus, a 17 hour bus, a 24 hour bus and last but not least a 28 hour bus. If you do the math that is just shy of four days in a bus because of my anxiety. How crazy is that?

As my anxiety continued to get worse, my days became tainted. If I knew I had a flight in a day, the day prior to that was shot. It kept building and building while Jordan and I were on an incredibly beautiful island called Ilha Grande (just four hours south of Rio). I spent hours thinking about the upcoming flight that we had from Rio De Janerio to San Jose, Costa Rica. I Googled flight anxiety, I checked weather forecasts, even some turbulence forecasts (bad idea) and pretty much ruined my last day in Ilha Grande.

Fast forward to us arriving back in Rio de Janeiro. I Skyped my family and told them my situation. My grandmother looked at me through her i4s and said, "Peter, life is tough sometimes. You have to get through it. God is in control." She went on to tell me that my Uncle Seth would say, "Don't worry about nothin' it won't get you anywhere." I did everything I could to hold back my tears and as soon as the call ended I let them fly. Two months of suppression of holding it in, not letting it out and trying to do it all on my own had finally caught up to me. I broke down possibly for the first time infront of my girlfriend. I was the most vulnerable I've ever been around her. She read me some passages in the bible which was incredible. I was so overwhelmed by God's presence that my tears weren't ones of sadness but rather tears of relief that came from knowing everything would be okay. I gave it all up to God at the moment and in that moment I was free. It is something that I will never forget and something that I will be eternally grateful for. 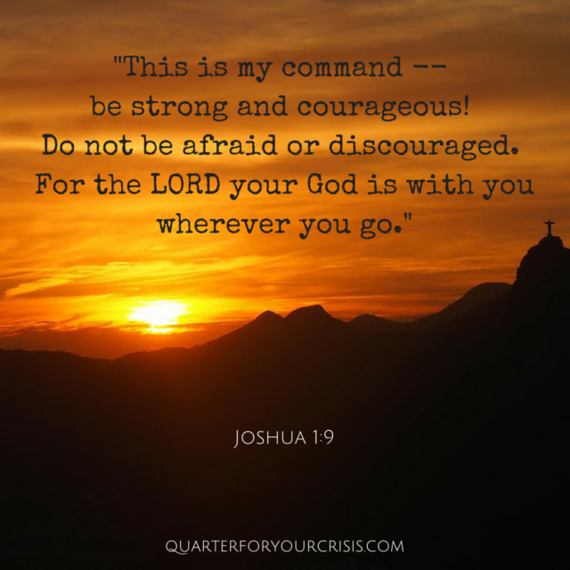 Now I've gone too far talking about this, but if there is one thing that Jordan and I have learned on this trip it's to be our true selves. Truly, I cannot do this without God's strength and until I realized this sole fact and actually gave it all up to him, I struggled.

I wanted to share this with you all because behind the filtered or nonflitered pictures that go up on Instagram, there is a person who struggles. There's a person who has to get pumped up every day to get through the day. There is a person like every one of you out there who has doubts, fears, questions and demands and that person is me. Remember that the next time you see a picture and get slightly envious of my life. It's not easy and it takes hard work. But for me, it is simple. You have to put God first and you have to truly want it. With God, impossible is nothing.

Co-founder, Quarter for Your Crisis

More:
how to deal with anxietygodcourageanxietyquarter life crisis
Trending