Scroll down for photos and video!

HuffPost's original "Hottest Freshman" Aaron Schock went unbuttoned for the most recent issue of Men's Health to promote his "Fit for Summer, Fit for Life Challenge." The ripped republican representative showed off his six-pack abs in order to encourage readers to drop weight -- and their risks of heart disease, diabetes and strokes.

An excerpt from the cover story:

"One of my favorite quotes is from Ben Franklin, who said, 'A good example is the best sermon,'" Schock says. "And I think if you want to start talking about healthy lifestyles and staying in shape, then you yourself should do your best to try to be a model, an example to people you're trying to convince to do the same."

And model he does. When he strolls into a New York City studio for his photo shoot, Schock isn't sporting the typical boxy clothes that Beltway insiders wear in order to hide what's stretching their belts. Instead, he's decked out in a form-fitting Zegna suit and tapered shirt that show off both his musculature and his fashion savvy. He looks more like a hit man from a European spy thriller than a boring politician.

Schock also stopped by Monday morning's "The Today Show," to share his hot pixxxx with the masses. Matt Lauer gushed, "Wow, you have nothing to be ashamed of with that photo." Then Schock said something or other about the health care crisis while images of him flexing flashed on the screen.

He remarked, "It's all about healthy choices and habits quite frankly and I found that when I was in college, I was beginning to pick up bad habits in terms of things I was eating and having a more sedentary lifestyle. And I realized, you know what, this isn't a direction I wanted to go and I simply went to a local gym and asked for help." Now, he works out at 5:30 in the morning for one to two hours.

He did confess, "I cheat once-in-a-while and have a scoop of ice cream and a piece of pizza." Oh, Aaron -- we would have never known! 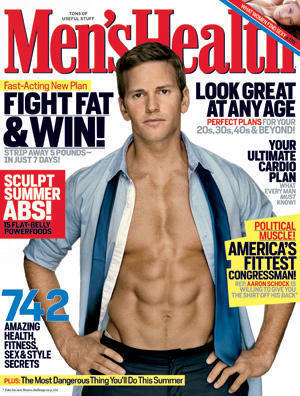