In 1962, Rachel Carson's groundbreaking book, Silent Spring, first brought global attention to the devastating impacts of DDT and other pesticides to human health, wildlife and our environment. Rachel Carson's revolutionary work, which led to the EPA banning DDT, was instrumental in giving birth to the modern environmental movement and introduced critical thinking of pesticides developed and promoted by the agro-chemical industry.

Because of Rachel Caron's pioneering commitment to environmental justice, the Environmental Protection Agency was created in 1970 under the Nixon administration, and a ban on the use of DDT in the United States was passed. However, the ban on DDT did not occur without a vicious fight by the pesticide industry, and Rachel Carson found herself targeted by the manufacturers and others who stood to profit from its use.

Soon after the publication of Silent Spring, Rachel Carson was the subject of a smear campaign by the pesticide industry, and she was often labeled as "hysterical." However, after testifying before Congress, a committee was created by President Kennedy and her scientific findings were proven to be true. 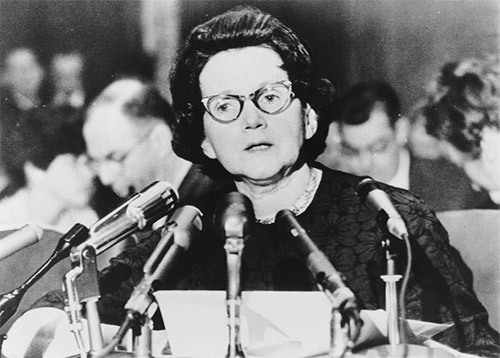 Fifty-four years later, history is now repeating itself with the recent introduction of AB 2596 into the California State Assembly. This bill, introduced by California Assembly member Richard Bloom, would ban deadly rodenticides (rat poisons) in California that have been scientifically proven to kill more than just the targeted rodents. It has been demonstrated that rat poison, including first and second generation rodenticides, commonly sold both over the counter and used by the pest control industry (Diphacinone, Brodifacoum, Bromadiolone, Chlorophacinone, Bromethalin and others) slowly, and cruelly poison hawks, owls, eagles, bobcats, foxes, bears, mountain lions, coyotes, songbirds, raccoons, fishers, and kit foxes, in addition to our children and our beloved pets.

When animals eat rodents that have consumed poison, they suffer the same consequence. The result is a cruel twist of fate called secondary poisoning. The animals that serve us in helping to keep the rodent population in check end up poisoned when rodenticides are used. It doesn't matter if the poison is applied by individuals, pest control companies, or dropped out of helicopters by our federal government. The end result is the same. California Department of Fish and Wildlife has been collecting data on the impacts of rodenticides on wildlife for years, and here you can find a partial list (keep in mind this list is a subset from 2014) of confirmed cases of secondary poisoning due to rodenticide exposure.

The Faces of Rat Poison

Some cases of wildlife poisoning due to rodenticide use have made headlines, however the vast majority of wild animals poisoned are not found, and go unreported.

P-22 is a mountain lion being tracked in California by the National Park Service. NPR did this story on what happened to him, the result of eating prey that had been poisoned. This photo below shows the suffering of this majestic predator, due to the use of rodenticides for rodent control. 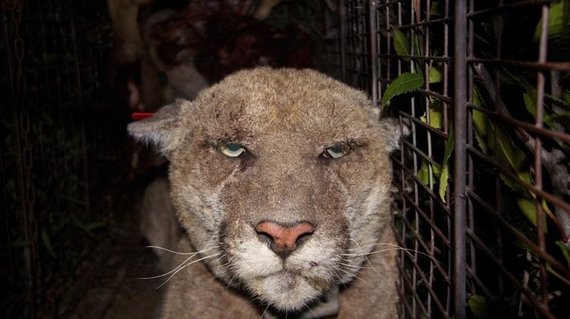 Pale Male is a beloved Red Tailed Hawk who enjoys celebrity status in New York City. In 2012, his mate, Lima died after consuming poisoned rodents. The tragic and unnecessary death of Lima was covered by the New York Daily News.

AB 2596 was sponsored by Raptors are the Solution, Poison-Free Malibu, The Humane Society of the United States and The Center for Biological Diversity. Currently, fifty-seven environmental groups support this ban and you can find them listed here. 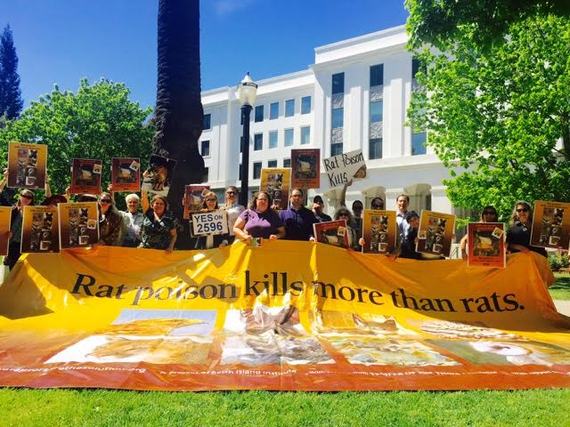 In 1969 the bill to first ban DDT was discussed at a Congressional level. Because of industry influence and lobbying efforts, the proposal to ban DDT never moved forward. It took the EPA and work by environmental attorney Victor Yannacone (who eventually became one of the founders of the Environmental Defense Fund) to finally get DDT off the market in the United States.

Rodenticides are the New DDT

Rodenticides are deadly poisons developed and marketed for rodent control. They are sold both over the counter to consumers and used by pest control operators. The only problem is, these poisons kill more than just rodents, and because of their highly persistent nature, remain in the food chain for an extended period of time. One of the reasons DDT was so environmentally destructive was this same persistence. These poisons don't just break down and go away.

Rodenticides impact all forms of life that come into contact with them, and if they don't kill an animal outright, the consumption of a sub-lethal dose can have devastating long term impacts to wildlife, and generations to come. Here you will find how these poisons harm wildlife if a sub-lethal dose of poison is consumed.

What is truly tragic is that because of the prolific use of rodenticides, we are killing the very animals that assist us as a natural form of rodent control.

Poisons Are Not Needed to Control Rodents

In 2009, I was appointed to Marin County's IPM (Integrated Pest Management) Commission. The purpose of this Commission is to advise Marin County's Board of Supervisors on how to reduce pesticide use on all county land, parks and open space. My intention in applying for a seat was to educate the Commission, and Marin County government officials on the devastating impacts that rodenticides have on wildlife and our environment. After my appointment by the late Hal Brown, I provided evidence of documented cases of secondary poisoning of wildlife, and shared my hands-on experience with wildlife impacted by rodenticide exposure. Marin County listened, studied the data presented, and implemented a ban on the use of all rodenticides on Marin County land. The county even took it a step further. To ensure that the rodent population could be controlled without harmful rodenticides, they hired an IPM consultant and created Marin County's Rat Management Plan and made it available to the public.

To learn how Marin County has been able to control rodents without having to use harmful poisons since 2009, click here.

The success of Marin County government in eliminating the use of these environmentally harmful poisons from their IPM toolbox, and controlling the rodent population in the process, serves as a model for the rest of the world. Poisons are not the solution to control rodents. Education and prevention is.

The Pesticide Industry has Geared Up to Fight AB 2596.

One thing I've learned is that history does repeat itself. As expected, the pesticide industry is fighting AB 2596 hard, and has been lobbying California lawmakers using fear as the main weapon in their arsenal, just as the chemical industry did fifty-four years ago with DDT.

This disturbing announcement, distributed by the Pest Control Operators of California, which refers to "Legislative Day - 2016", sheds light regarding the lobbying efforts taking place within the state. Reading their issues for 2016 - Defeating the bill to ban rodenticides, defeating the bill to mandate notification of spraying (WTF), and opposing sales tax on services illustrates that public health and safety is not the primary concern of this industry.

Lisa Owens-Viani co-founded Raptors are the Solution in 2013, after finding several Cooper's Hawks in her Berkeley neighborhood that were confirmed through necropsies to have been poisoned by anti-coagulant rodenticides. Lisa partnered with Allen Fish, Director of Golden Gate Raptor Observatory, and Raptors are the Solutions, AKA "RATS", was born.

RATS has been educating the public and government officials on the environmental risks of using rodenticides, and provides information on how to solve rodent problems without using poisons.

"AB2596 will stop the unacceptable and continued poisoning of California's wildlife. Every time we lose a hawk, owl, or bobcat, our state once again loses one of its very best rodent control solutions. Although the bill won't be heard again until next year, we, and our many ally organizations, will not give up. The pest control industry is pointing the fingers at consumers--and everywhere but themselves--but it is their products that are causing all of these wildlife deaths and illnesses. Rat poison is wildlife poison." - Lisa Owens-Viani, Co-founder, "Raptors are the Solution"

In addition to never using rodenticides, you can help in the following ways - Raptors are The Solution and Poison Free Malibu have the following Change.org petition, which is gaining momentum every day. Please add your signature, comments, and share widely. This second Change.org petition was started by San Francisco pet owner, Kimi Hein, after her dog ingested Bromethalin (a rodenticide with no known antidote) that had been placed outdoors by a neighbor.

Important Update: Originally, AB 2596 was to be introduced to the Environmental Safety and Toxic Materials Committee on Tuesday, April 12. However, due to the intense lobbying efforts of the pesticide industry, introduction of the bill has been postponed until the spring of 2017.