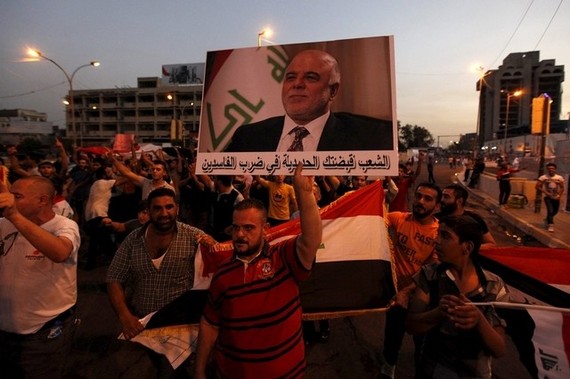 It seems that the 12 years' crescendo of politicization, sectarianism and mismanagement has finally reached its climax. The mid boiling temperature of Iraq's sweltering summer and daily terrorist attacks did not stop the masses from coming out and saying enough is enough; the Iraqi people have called upon Prime Minister Haider al-Abadi to dissolve parliament, hunt down corrupted politicians and deliver public services.

The peoples' call upon Abadi to implement radical reform, backed with Grand Ayatollah Sistani's absolute support for the PM, represents a carte blanche that has been granted to no other politician in Iraq's modern history. If Abadi succeeds in his mission-impossible, he could go down in history as the Nelson Mandela of Iraq. In fact, while many wars have been waged in Iraq, no war has been waged so boldly against one of Iraq's most serious underlying problems: entrenched political corruption.

A Watershed in Iraq's Fledgling Democracy

Abadi's announcement on the 9th of August to institute a series of unprecedented reforms including the cancellation of some of the most senior positions in Iraq's Federal system, in a bid to end the sectarian quota-system, marks a potential watershed in Iraq's political history and its future.

If Abadi's gamble pays off, the 9th of August 2015 may in hindsight be remembered as a momentous day in Iraq's history, to outweigh the eventful regime change of the 9th of April 2003.

Abadi's announcement was made in response to mass civil protests across the country representing a large cross section of Iraqi society, voicing discontent over the inability of Iraq's Federal Government to deliver essential services such as electricity, since regime change in 2003.

Much of this failure can be attributed to a surge in corruption, incompetence, mismanagement and sectarianism which has plagued the post 2003 political landscape. The recent protests were directly aimed at Iraq's Parliament, Government and Provincial Councils for the gradual and systematic decline in living standards and poor delivery of public services.

Demonstrations have been escalating from a weekly basis to a daily one, putting intolerable pressure on Abadi and the Iraqi Parliament to deliver in real time, or else risk a widespread civil uprising which Iraq can ill afford. Given the fractured state of the country and its struggle to defeat ISIS, the situation could not be more critical.

The impetus behind Abadi's proposed fundamental reforms is a direct result of Grand Ayatollah Sistani's call upon Abadi in his capacity as PM to implement radical reform with the full backing of the revered holy figure. It should be remembered that Grand Ayatollah Sistani was both instrumental in securing the unprecedented formation of the Popular Mobilization Forces to support the Federal Army in its war against ISIS and in securing a smooth and peaceful transition of power from the previous Maliki administration to the present one. Grand Ayatollah Sistani's endorsement and the impetus created by the demonstrations open a genuine window of opportunity for Abadi's gambit to succeed if he moves swiftly and decisively on several fronts.

Reforms in a Nutshell

The latest measures of reforms proposed by Abadi represent his opening gambit. His move was cleverly cloaked under the authority of Iraq's 2005 constitution, namely Article 78 which allows the prime minister to clamp down on corruption through a series of aggressive measures. The summary of Abadi's reform proposal includes:

However, the most notable reform was his bid to cancel the posts of deputy PM and Vice President whilst calling to strip them of the majority of their security personnel. Although Abadi was a compromise candidate for the position of PM and was perceived as being a successful technocrat since regime change, given current events, the endorsement of Grand Ayatollah Sistani for his proposed reforms including those of his predecessor Maliki, Abadi's gambit appears to represent Iraq's brightest hope in alleviating suffering and restoring dignity to all Iraqis.

Time Running Out for Parliament or Abadi?

If Abadi's reforms are to succeed they will be subject to Parliament's approval. Parliament would appear to be left with little option but to approve his reforms given rising popular anger against several prominent politicians and the public's repeated demands for Abadi to dissolve the parliament.

Should Parliament fail for whatever reason to ratify his reforms, he would have the power acting with the President to dissolve Parliament. For constitutional reasons, Abadi would not be able to call for early elections given that two provinces are under ISIS occupation. Abadi's government (in theory) would then be able to act as a caretaking government with sweeping powers such as declaring martial law.

However, while Abadi is now displaying bold leadership, these tough measures must not echo the excesses of Iraq's former autocrats and dictators. Iraqis can rest assured that given Abadi's well documented personal history, there is no chance that he will be tempted to go down this road.

The timing for Abadi is also critical as any delay by Parliament to ratify his reforms may force him to move preemptively to secure the absolute allegiance of Iraq's defence forces, PMFs, and interior ministry to strengthen his fragile hold on power. Failing this, he may be vulnerable to a coup d'etat or worse, and Iraq may descend into a state of anarchy which will directly play into the hands of ISIS and his political rivals.

Abadi's reforms - even if ratified - will not be an immediate panacea to Iraq's urgent need for basic services. It will take time to upgrade Iraq's energy infrastructure and despite Iraq's severe fiscal deficit more will need to be done on a Federal and regional level to subsidize prices in order to alleviate short term price increases owing to investment in energy infrastructure.

The reforms may result in the arrest and detention of high profile politicians and their cronies which will damage the credibility of entrenched political parties and diminish their political influence. This may sound drastic, but when considering the scale of corruption in Iraq we must remember that no public servant in any country with a rule of law could expect anything but arrest for misappropriation of public funds. Iraq should be no different.

Abadi will therefore have to build a speedy consensus with the political elite to ensure the process of combatting corruption is independent and fair.

This may not be easy for Abadi as he is a prominent member of the National Alliance party which holds the majority of seats in Parliament. Whilst he may be resisted in his efforts, transparency in the media especially, social media, together with the support of the clerics in Najaf should help ensure his efforts in building consensus gain momentum. It is worth noting here that when the dust settles, Abadi has on his side a proven reputation for conciliatory politics.

However, it is also ominous to note that Iraq's history is littered with the brutal assassinations of its leadership and Abadi may not be an exception, given the high stakes involved in combatting corruption at the highest level. Yes, the stakes are high as to whether he succeeds or fails, the shape of Iraq's political future and the integrity of Iraq's constitutional democracy now rest on his shoulders.

It is not without irony that following Abadi's call for reform, key politicians accused of corruption by demonstrators are jumping on the wagon to fight corruption by pressing for their representatives to form part of Abadi's advisory commission on these reforms. This will no doubt have a ripple effect in the Kurdistan Region of Iraq, and already President Masoud Barzani of the KRI and his nephew Prime Minister Nechirvan Barzani are calling for deeper reforms ahead of the August elections there.

It is imperative that depending on the 'temperature' and frequency of civil unrest that Abadi conducts all his efforts in instituting and implementing his reform in the most transparent manner possible, demanding full accountability for those officials and departments responsible for implementing the reforms. The use of Iraq's media with a carefully orchestrated information campaign in the international media, for a certain period will be instrumental in this regard.

Abadi must swiftly build consensus with the major parties in Parliament in adopting the spirit and letter of his reforms by isolating political figures with a prima facie case of fraud in the past or present without threatening the political legitimacy of the parties themselves.

He must secure the unconditional allegiance of the Iraqi armed forces, security forces and PMF to ensure his reforms (if ratified) will not pose an immediate or short term danger to his life or remaining term in office. And he is aware of these dangers: in December last year, he said he would not back down in the fight against corruption, "even if this leads to my assassination."
Ideally, Abadi should be relieved from his political affiliation to ensure complete impartiality and credibility in the implementation of his reforms.

Finally, Abadi must facilitate the phased departure of unqualified, incompetent, inexperienced or 'invisible' civil servants and pave the way for the gradual introduction of able Iraqi technocrats, whether in Iraq or forming part of its diaspora (who will be essential in the mammoth task of Iraq's rehabilitation).

Abadi's gambit is Iraq's first moment of truth since regime change in 2003. Corruption is a systemic feature of rentier oil producing countries such as Iraq, especially when in transition from a centralized socialist style economy to a Federal capitalist system. However, proper regulation, competent public administration and budgeting help to ensure the delivery of basic services and security which Iraq has sorely lacked since 2003.

The people of Iraq have finally raised their voice in a united and concerted fashion, united with the country's powerful clergy in laying the blame solely with the corrupt and inept politicians in Baghdad. Abadi understands the pulse of the country well enough to know his time to act decisively is now and for the sake of Iraq and its people, his gambit must succeed.