Part II
This is the second in a series of two essays on why the author no longer attends church. 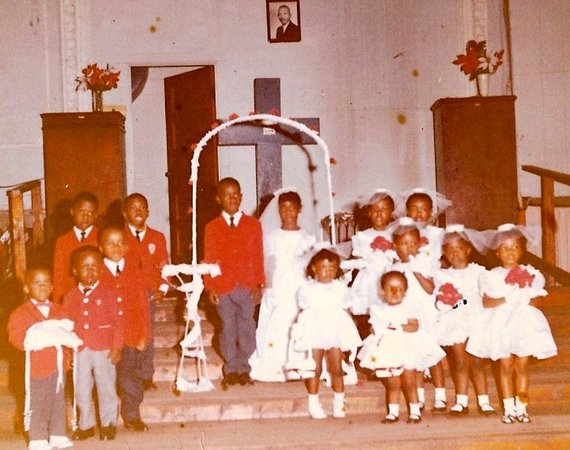 John Fountain (second boy on the left) stands in a Tom Thumb wedding at the All Nations Church of God In Christ in Chicago, which he attended as a boy with his family. A son of the church, he writes: "I know church-speak and feel as comfortable shouting hallelujahs and amens and lifting my hands in the sanctuary as I do putting on my socks."

Even in an age of preacher as celebrity, it is not the evolution of a Bling Bling Gospel that most disheartens me. It is the loss of the church's heart and soul: the mission to seek and to save lost souls through the power of the Gospel and a risen savior.

As the homicide toll in black neighborhoods has swelled, I've wondered why churches or pastors have seldom taken a stand or ventured beyond the doors of their sanctuaries to bring healing and hope to the community--whether to stem the tide of violence and drugs, or to help cure poverty and homelessness or any number of issues that envelop ailing black communities.

Once, after a service at my grandfather's church in a small western suburb of Chicago, I mentioned to a visiting pastor that there was a drug and gang war going on in his community. "I don't know nothing 'bout that," he responded. I wondered why not. How could he not know about something that affected a community in which he was a "shepherd"?

"I could be wrong. My criticism might be too harsh. But it is no harsher than my pain."

When I returned to Chicago nearly five years ago, after living in Northern Virginia, where I worked as a reporter at The Post, I was eager to assist in the ministry at my grandfather's church. Within a few months, however, it became apparent to me that there was little serious interest among the leadership in connecting to the local community--aside from the idea that they might potentially fill the empty pews.

And I decided to leave, though not without first having many conversations with my grandfather about the implosion of church ministry.

And further contributing to my disappearing act is that, after being put down and put upon in a society that relegates black men largely to second-class status, the last place I want to feel that way is at church. And yet, in the church, where I have at times in my life felt the most uplifted, I have at other times felt greatly diminished, most often by insecure leaders.

If such leaders feel threatened by your ability to speak or preach or teach better than they, or by the fact that you think differently from them, or by the fact that you possess some other social badge they do not--like a college education--then they perceive you as stealing a little of their sheen in the public's eyes. And you become subject to the same kind of shunning and subtle disconnection that I have seen and known in the professional world.

By the summer of 2002, there had been a myriad hurts and disappointments to accompany my disillusionment. When the then-pastor of my Chicago area mega-church responded to my inquiry about not being able to reach him for weeks, I was already bending in the wind.

"Do you have a cell phone?" he asked during a follow-up telephone conversation to a letter I had sent him.

"Then let me ask you something, John," he continued. "If you had a problem with your cell phone and you called SBC, would you expect to reach the CEO?"

His words blew me away.

Given the state of black men in America, given the number in prison or jail or headed that way; given the thousands of us who find our way to early graves and the black men on the other side of the guns who send us there; given the number of us who seek solace in a bottle of liquor or in illegal drugs; given the number who silently cry ourselves to sleep at night, it seems that we would make for a plentiful harvest for a church really seeking souls.

I suspect, however, that as long as our wives, our children and our money flow through the church's doors; as long as there are still a few bodies to fill the seats; as long as the church can claim a semblance of relevance to the community; as long as some of us on the outside loom as potential critics of the direction, heart and stewardship of those black men charged with leading the church, very few are likely to ever come looking for us.

I could be wrong. My criticism might be too harsh. But it is no harsher than my pain.

And so I have taken some solace in the words of Dr. Martin Luther King Jr., who, more than 40 years ago in his "Letter From a Birmingham Jail," wrote that the church was in danger of being "dismissed as an irrelevant social club." "In deep disappointment I have wept over the laxity of the church," he lamented. "But be assured that my tears have been tears of love. There can be no deep disappointment where there is not deep love. Yes, I love the church."

I miss the beauty of worship, of lifting my hands in the awesome wonder of fellowship with my sisters and brothers in Christ gathered in the house of God with my family.

"Imani, have you said bye to Daddy?" my wife called to our daughter.

"I already did," she answered.

Actually, we hadn't said goodbye. A few minutes earlier, I had called her upstairs and given her a dollar for Sunday offering and hugged her tight, unable to address her question about why Daddy doesn't go to church anymore.

Perhaps I will explain one day. Or perhaps I won't have to. 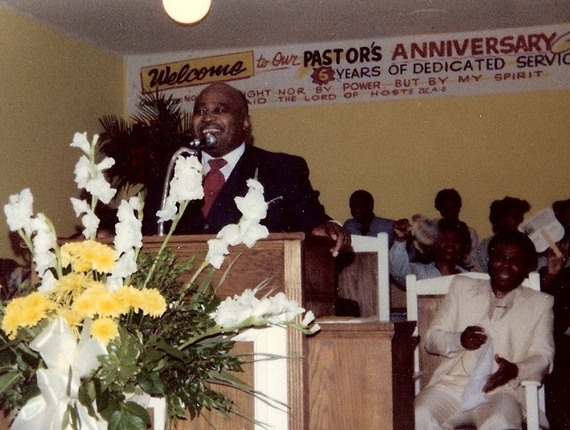 John Fountain's grandfather, the Rev. George A. Hagler, stands at the pulpit (circa 1970's) during the anniversary of True Vine Church of God In Christ in Chicago, which he founded. 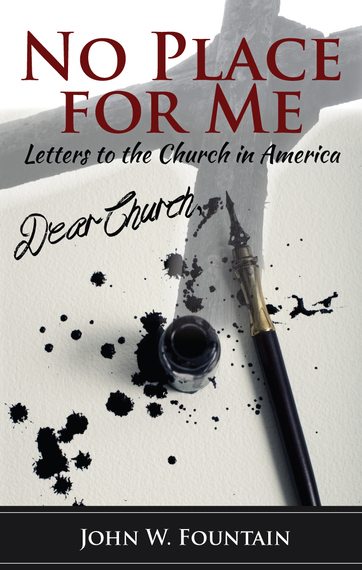 No Place for Me: Letters to the Church in America (Release Date: Spring 2016, WestSide Press Publishing, Chicago)