Dubai's major English-language paper Gulf News reports today on a phenomenon that plagued Dubai throughout 2009, but now it comes with a new twist. The abandoned car -- left to acquire a sand coating in a Dubai parking lot, sometimes with a note from absconding debtors ("Bye bye, Dubai!") -- was the reporter's symbol of Dubai's looming demise. 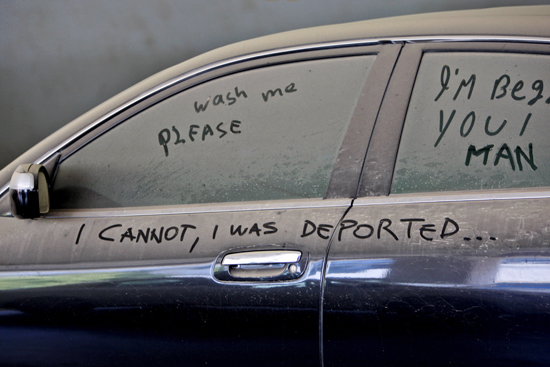 Hundreds were supposedly filling the airport lots (while local sources estimated a dozen). And in the midst of what should be a slow, hot summer, abandoned cars are the nuisance, not of a city's global image but of developers trying to get things restarted. Sites that once functioned as temporary parking lots are being prepared for new development, and the cars left behind on them when payments couldn't be made are now deterring construction. Other modest signs of Dubai's recovery have peppered the summer's international press, but how ironic that one of 2009's most visual metaphors should return as a tell-tale toward recovery.

So how did the abandoned automobile become such a mediated commodity?

With the global economy in free fall, newspapers sought a tangible example of the effects of the financial crisis. Dubai, a city that seemed to best encapsulate the credit-fueled boom of the previous decade was the easiest target. It had London's or New York's avarice, but Dubai's was less laced with 'culture' and 'history.' The frozen cranes and fleeing expatriates provided fuel for human-interest stories that somehow made it into the business sections. Reporters parachuted in for the weekend to take the Big Bus tour and witness firsthand the despair on the faces of the migrant construction workers. They felt the city's pulse in hotel lobby bars. Journalistic rigor and level tone went out the window as obituaries were written for the city in bold accusatory language, backed up by hearsay. Reading these pieces, the West could bathe in smug schadenfreude and forget about its own troubles.

Classic Dubai-bashing articles include Germaine Greer's brief piece for the Guardian, simply titled 'From its artificial islands to its boring new skyscraper, Dubai's architecture is beyond crass'. She found that the city had 'neither charm nor character.' Robert Worth's New York Times piece 'Laid off foreigners flee as Dubai spirals down' famously claimed that instead of water, cockroaches flowed out of the taps at the newly completed Atlantis hotel. But the genre-defining high point of the form came with Johann Hari's 'The Dark Side of Dubai' for The Independent, which delivered the memorable insult: 'this is a city built from nothing in a few wild decades of credit and ecocide, suppression and slavery.'

Of course, to attack a city for its difference is not a new idea. William Gibson arguably defined the formula with his 'Disneyland with the Death Penalty' piece on Singapore for Wired in 1993. And a formula it is. A bashing article can be easily identified by a number of predictable traits: the sensational title and iconic image of disrepair, a memorable opening statement backed up with incredible statistics, an outlandish quote from an 'authentic' source such as a taxi driver, wrapped up with a glib concluding statement. But just to make it even easier for you to join in the fun, we've put together the handy 'Dubai-bashing Article Generator', hosted over on Arabian Business.

But why bother bashing Dubai? The popularity of this genre suggests there is something deeper going on underneath it all. Rem Koolhaas in a presentation at the Sharjah Biennial in March 2009, right as these articles began to surface, suggested that it reflected the need for "reassurance of Dubai's demise, to maintain and restore our own confidence in terms of the crisis we are now facing." Instead of centuries of urban accrual and incremental improvement and wealth leading to the great cities of today, Dubai seemingly extracted its city from the pages of an annual report. By shunning what is different, we can confirm our own way of life and can defend the city as we think we know it. Indeed, this is how Dubai's leader, Sheikh Mohammed, sought to head off such criticism, claiming 'success implies a certain burden that cannot be avoided.' And yet despite the source of these attacks, he ironically enlisted the help of UK PR consultants in creating 'Brand Dubai', to spin the news of success in an attempt to boost investor confidence.

With the announcement on November 26 of Dubai World's default on its mounting debt, the claims made by the international press up to that point seemed to have been validated. In a collective screaming of 'we told you so!', a new round of Dubai-bashing ensued with unparalleled vigor, culminating in the Sunday Times' front page headline 'How Dubai's dream sank in a sea of debt', featuring a photoshopped image of Sheikh Mohammed flailing in water as towers crashed around him, leading all foreign press to be stripped from newsstands across the Emirate.

Since then, it has been noticeably quiet on the Dubai-bashing front. Dubai World has been working on its global image, making slow steps toward restoring investors' confidence in its ability to repay. Perhaps confirmation of the depths of Dubai's woes took the fun out of the speculation. Or as the toxicity of global markets has more evidently been exposed in Europe -- with Greece, Spain and Portugal narrowly avoiding their own sovereign defaults -- it has become increasingly clear that the West's assumed superiority is also unstable.

Or maybe the fact Dubai hasn't become a ghost town has proved that Dubai was a proper city all along, doing what cities do: trying to deflect the criticism, making some changes and looking for ways to keep the people coming.

Dubai-bashing then will go down as a phenomenon of 2009, a brief moment when the world's media agreed on a formula that could get us through a hard spell. We were only asked to imagine stacks of abandoned cars.

List of Dubai-bashing quotes from the pages of Al Manakh 2:

'Some of the unfinished buildings I saw will never be finished. Many should never have been started. For all its extravagant novelties and its masses of petunias, Dubai is a city with neither charm nor character.' - Guardian, Feb 9, 2009

'a downward spiral ... has left parts of Dubai - once hailed as the economic superpower of the Middle East - looking like a ghost town.' - New York Times, Feb 11 2009

'the last word in iconic overkill, a festival of egotism with humanity denied. An architectural chorus line of towers, each shouting louder and kicking higher... 'the dunes will reclaim the place.'' - Guardian, Mar 20 2009

'If this really is a city and not some sheikh's mad idea of what a metropolis should be, it's a city despite itself ... Dubai is in danger of becoming a ruin-in-waiting.'' - Toronto Star, Apr 5 2009

'This Neverland was built on the Never-Never - and now the cracks are beginning to show. [...] This is a city built from nothing in a few wild decades on credit and ecocide, suppression and slavery. [...] Suddenly it looks less like Manhattan in the sun than Iceland in the desert. [...] The very earth is trying to repel Dubai, to dry it up and blow it away.' - Independent, Apr 7 2009

'They have no oil, no culture, no history [...] Not long ago, Dubai emerged as a symbol of crazed civic ambition, a once-quiet desert burg suddenly superheated by cheap capital. That's over.' - Smart Company, Aug 20 2009

'It looks like a modern country, but it takes more than a few skyscrapers to create one of those.' - Observer, Oct 11 2009

'The whole collection of mega-projects is continuously threatened by the sand or the sea or any number of financial or human forces' - The Age, Oct 19, 2009

'The hyper-modern skyline of Dubai, United Arab Emirates, with its mismatched skyscrapers looking as if they were hurled down at the Persian Gulf from outer space, is being emulated in Beirut and other cities.' - New York Times, Nov 26 2009

'Its only when the tide goes out that you find out whose artificial islands are built on sand.' - Financial Times, Nov 29 2009

'Bling is banished from Dubai [...] Dubai is fast becoming the tombstone for capitalist hubris and exuberance, its hollow skyscrapers a poetic shrine to decadence and impunity.' - Guardian, Dec 2 2009

'Sandcastles in the Sky' - The New York Magazine, Dec 4 2009 'They do not understand anything, we are strong and persistent. It is the fruit-bearing tree that becomes the target of (stone) throwers.' - Sheikh Mohammed bin Zayed al Maktoum, UAE Prime Minister and Vice-President, and Ruler of Dubai, responding in a press conference to questions from the media over the reaction of international markets to Dubai World's debt default, Dec 2 2009.