Hero the dog has truly earned his name.

An abandoned dog led animal rescuers to a litter of 10 sick puppies and their mother in Dallas, Texas, last Tuesday. The pooch, who has since been aptly named "Hero," caught the attention of the rescuers with loud, continuous barking that led them to discover the pups and bring them to safety. Despite frigid temperatures, the whole family survived and is now happily in a foster home, Fox News reports.

"I told [Tarashevsce], 'I bet you he’s trying to get you to follow him,'" Miller told CBS 11 News. "Every time we got closer he would go away and bark at us saying, 'Keep coming. Keep coming my way.'"

Hero had previously escaped the efforts of Dallas DogRRR when Tarashevsce would visit the park where he was abandoned. She would often spot Hero with another dog named Mona, and was concerned when she found him alone on Tuesday.

"I had suspected that [Mona was] pregnant, so that's why I followed him,” Tarashevsce told Fox. "I still can't believe it, that he actually led me to the puppies. But I'm so thankful because we wouldn't have found them otherwise."

The staff of DogRRR told CBS 11 News they are hopeful they will find homes for the puppies once they’re nourished back to full health. For now, Hero, Mona and the 10 little pups are happy to be safe and warm. 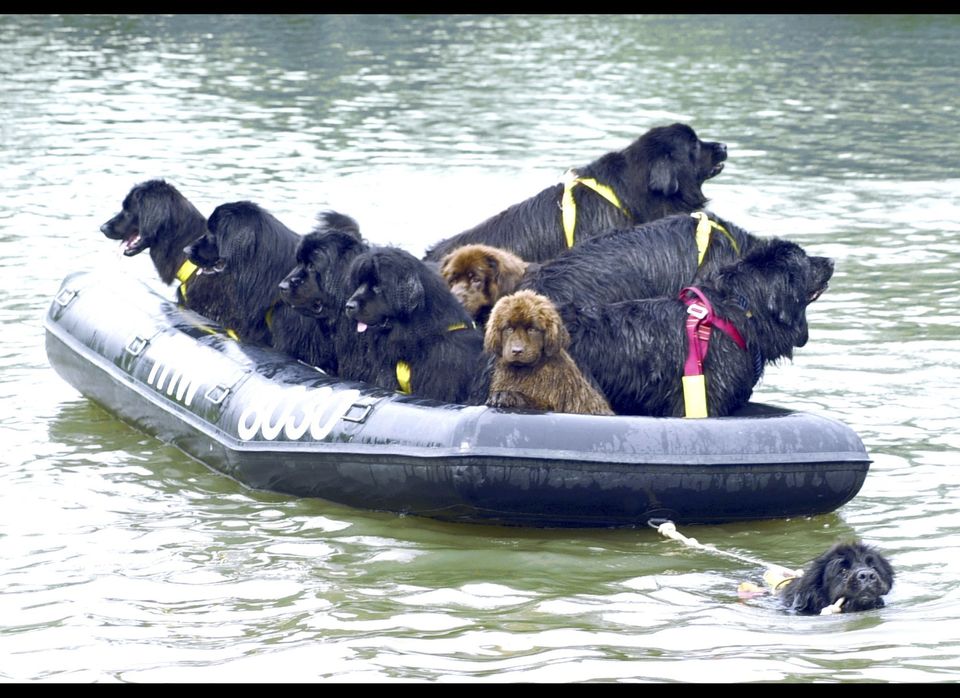 1 / 34
Italy Canine Lifeguards
In this 2000 photo provided by SICS (Scuola Italiana Cani Salvataggio-Italian School of Canine Lifeguards), lifeguard dogs of the Italian school perform a makeshift rescue operation at an international lifeguard meeting in Winterbach, Germany. Hundreds of specially trained dogs form Italy's corps of canine lifeguards, deployed each summer to help swimmers who get into trouble in the nation's popular seas. Unlike their human counterparts, these lifedogs can easily jump from helicopters and speeding boats to reach swimmers in need of a rescue. With millions flocking to Italy's crowded beaches each summer, the Italian Coast Guard says it rescues about 3,000 people every year _ and their canine helpers are credited with saving several lives. (AP Photo/Courtesy of Italian School of Canine Lifeguards, ho)
AP