If you thought Anakin Skywalker's home planet was located in a galaxy far, far away, guess again. The vast lands of Tatooine are actually located in the middle of the Tunisian desert, a fact brought to our attention by Rä di Martino.

The visual artist and filmmaker recently ventured to North Africa to explore the ruins of abandoned film sets, capturing startling snapshots of Star Wars settings years after filming shut down. Showcasing the aging yet familiar architecture of George Lucas's universe, Martino's photographs strike at the heartstrings of any nostalgic sci-fi fan. 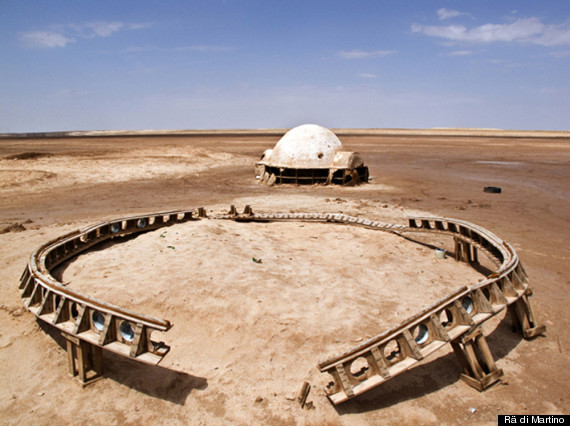 "I think is very interesting the amazing poetic potential of those ruins, being ruins of something that was the future in our imagination," Martino explained in an email to The Huffington Post. "It's bewildering to see the biological decay of those cheap materials, which once built perfect images of our past and future."

Martino first decided to venture to Tunisia after seeing an image on Google Earth referencing the abandoned set of "The English Patient." Intrigued by the startling discovery, the artist researched further, learning that several Star Wars sets had been all but abandoned in the middle of the Chott el Djerid desert.

In 2010, she used Google Maps as her guide and set forth on a cinematic archaeological adventure in the Tunisian dunes that resulted in "Ruins in Reverse," an exhibit on view now at London's Tate Modern. Scroll through the images below and let us know what you think of Martino's work in the comments.