Breakups suck. Especially when you're blindsided, there's little explanation and the breaker-upper has already moved on. Oh, and that "It's not you, it's me," line is comforting to no one, ever. But when an app -- that one that promised it would always be there for you -- shuts down? It's a conscious uncoupling that's just as heartbreaking.

Of course, any app I use could shut down, pivot their strategy, run out of money... it happens. But when that app was built using my personal info and hours of effort on my part, I feel a range of emotions not unlike my dating years: betrayal, feeling used, frustration, panic... and the void that comes from having an important part of your life suddenly gone.

For instance, last year I fell hard for a little-known app called, Ness. Ness was a handsome app that helped me find restaurants that were well-suited to my needs and close by. I spent time telling it my likes and dislikes, rating restaurants, and writing reviews. I even beta-tested it as they rolled out new versions and offered my feedback on a conference call I was asked to attend.

We looked good together. I thought we had something. 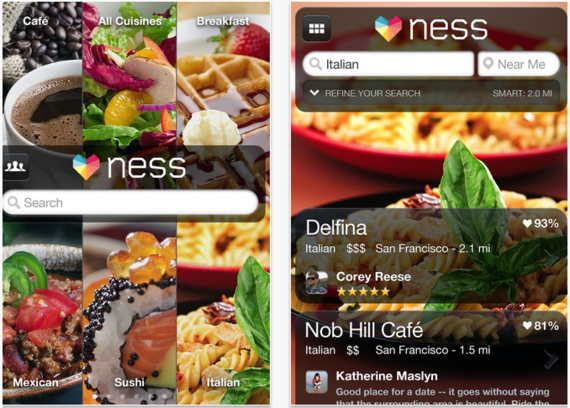 Then Ness was acquired by OpenTable, and before I could even use it to find a cute coffee shop where we could meet and say goodbye, it was gone.

Of course, there are scores of apps that help you find restaurants, and I have since moved on. But that break-up stung, because I had really decided that Ness was the one for me. Even worse, I had found Ness on the rebound after Oink, a very innovative restaurant finder, closed down after only three months with this cruel letter:

This was an app whose entire premise was that people spend their time rating, reviewing and recommending restaurants to people in the Oink community. And the whole thing was just so they could "rapidly build and test out new ideas?" Harsh.

And then there are those breakups where you have that unsettling feeling... that they know a bit too much about you to be your ex. When Manilla, an app I trusted to organize my bills and financial statements suddenly announced they were closing, my first thought was, How will I organize and pay bills now? And my next thought was, Holy crap, those guys know a ton about me.

Not only did I (and thousands of others) help them build their business, but I trusted them with my deepest secrets. Can I trust them with personal data, post-break-up? Manilla was owned by Hearst Corporation, a large company that has assured me they have safeguards in place. But that's like hoping that an old flame won't post those pictures he took during your wild weekend in the Bahamas.

It all gives me pause about blindly searching for alternatives: I'm wary to love again.

If this has ever happened to you, it can be tough. Fortunately, there are things you can do to protect yourself and find closure. Here are some cures for a bad app break-up:

Download your data ASAP. This is the most annoying part of any breakup -- getting your stuff back. I know it's easy to put off, but don't. It's likely there's a very finite amount of time before it's no longer an option. Just like an old boyfriend's favorite sweatshirt that you kept as retribution... grab it before it's gone.

Delete. Over means over. Now that you're no longer involved, get your personal info out of there. Closed apps can be sold; your personal data shouldn't be part of the package.

Don't act on the rebound. Think clearly and carefully before you choose a replacement, especially if it's an app that stores sensitive information. Though a little upstart might be appealing, do your diligence on the founders, the board members, their funding... read up.

Talk it out. Just the way you'd hop on the phone and poll all your friends and family for their reactions to your ex and how you deserve better, now is the time to read your current app's discussion boards and find out what other users are recommending. Chances are they're weeded out all the creeps and vetted the real contenders for you.

Do some online matchmaking. AlternativeTo offers alternatives to popular apps; just type in the one you're using, and instantly find a long list of similar options. Of course, as with online dating, some look better on paper than they are in person.

Keep your eyes open. If you decide to start a new relationship, it's smart to occasionally peek at the news and their overall feedback rating. If things are starting to look shaky, you might want to initiate the breakup... rather than risk being dumped.

Spill all your abandonment issues in the comments. I'm here for you.