An owner and breeder of world-class miniature horses in Florida is hoping video surveillance footage will help identify the person suspected of sexually assaulting several of her horses and killing her watchdog.

The sexual assaults have been ongoing since May 2012, according to Abby Conder, of Marion County.

"Since May, we have had someone come into our barn on several occasions in the middle of the night and take our miniature show horses and sexually attack them," Conder told The Huffington Post.

On Sunday, Conder got her first glimpse of the apparent perpetrator when she reviewed video footage from inside her barn recorded earlier that morning.

"Someone's got to know this man," Conder said. "He's been in this area at least eight months now. These are babies I have raised and it's affected them psychologically. It's hard to get in a stall with them and I can't get near their rear ends to put a harness on them."

Conder said she has filed seven reports with the Marion County Sheriff's Office and the agency has offered little assistance in catching the person responsible. "The police come out, take a report and go away. They don't help us," Conder said.

When a horse was sexually assaulted two weeks ago, she said police told her to put a camera up in the barn.

"The officer said we had to get this person on film. He said, 'If you get them on film, it will help us identify him.' So we bought a night-vision camera and put it in barn. I checked it every day and nothing. Then, on Sunday morning, there he was in the barn."

Conder, who is in her 50s, said she was excited to finally have the image, but dismayed after she met with a deputy with the sheriff's office.

"I called the police and said I had him on film," she said. "They came out, did a little report and I offered them the film. They said, 'No, we can't use that for anything.' They said what I would need to do is find out when he is in the barn, catch him and call them."

Conder's 150-pound shepherd guard dog also was found dead in the barn. "I put him in the barn and the next morning his head was smashed in," she recounted. "We called police, and they came and took pictures." 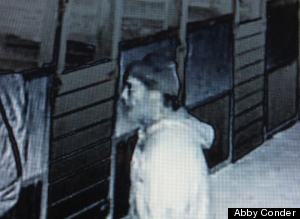 A video still of the possible suspect

Contacted by HuffPost, the Marion County Sheriff's Office did not respond to questions about the case, but said the office is working on it. "MCSO is actively investigating Ms. Conder’s case," Jenifer Fisher Lowe, a community relations specialist for the sheriff's office said in an email.

"The most recent case was just this past Sunday. Prior to that, the last report was in August," Lowe's email said. "Deputies are using several resources to investigate who is doing this and make an arrest. They have been at Ms. Conder’s home to follow-up as recently as today."

Conder said she and her husband were alerted to the sexual assaults when they discovered one of their horses tied to a fence. At first, they thought some local teens had played a prank. "I looked around her tail and it looked like someone had set a grenade off on her. It was horrible," Conder said. "We called the vet and he said the person who did it had torn her cervix with something, possibly a baseball bat ..."

The vet also collected semen samples from the horse, she said.

Conder has not been able to get help from local animal activist groups. "We have tried and no one will help," she said. "Bestiality is such a [taboo subject] that when people hear about it, they don't want to talk about it."

Anyone who recognizes the subject in the video or has information about the animal sexual assaults is asked to contact the sheriff’s department at 352-732-8181.