UPDATE: Days after writing this, it's hardly surprising to wake up and find that the New York Times has suddenly found a use for the word "torture," when previously, "enhanced interrogation techniques were the norm. Via Glenn Greenwald: 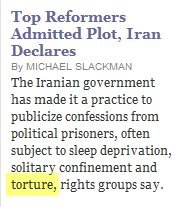 I wonder if you'd be good enough to explain something to me. Mere months ago, you said:

"Exactly what constitutes torture continues to be a matter of debate and hasn't been resolved by a court. This president and this attorney general say waterboarding is torture, but the previous president and attorney general said it is not. On what basis should a newspaper render its own verdict, short of charges being filed or a legal judgment rendered?" Jehl argued for precision and caution. I agree. "

Yet, today, you have a piece by Michael Slackman, summarized on your site as follows: "The Iranian government has made it a practice to publicize confessions from political prisoners, often subject to sleep deprivation, solitary confinement and torture, rights groups say." The article somehow manages to avoid classifying these techniques with the commonplace and widely accepted term "enhanced interrogation techniques."

According to recent precedents, established by the United States, a government has the leeway to subject people to "intense questioning" as a part of a response to their national security interests. I wonder if you could explain how the word "torture" came to be used in this instance. Has a "legal judgement" been rendered that I've not heard of? Under what distinction is the word "torture" used here?

We'll see what he says about this!

In my younger years, I would simply expect this news to be greeted with universal outrage, knowing that the techniques being described had long been deemed to be well across the Bridge Too Far. Now that I've lived through the Bush administration, however, I am forced to contemplate the possibility that Iran is merely taking legitimate steps to obtain critical information in their nations' vital national security interests. One mustn't preclude the possibility that many of those being waterboarded are privy to information about "time bombs" that may, at this moment, be "ticking."

The whole matter could be investigated, I suppose, but I'm also forced to consider that once Iran is through this rough patch, it would be better if everyone involved just looked forward, not backward.

Anyway, I guess everyone's really playing follow-the-leader on this nation's innovations in the area of what our press calls "enhanced interrogation techniques." Pop champagne.