The family of a man who was fatally shot by police after a freeway chase filed a $120 million legal claim against the city of Los Angeles Monday. The claim could be the beginning of a lawsuit.

In a press release, attorneys for the grieving family of 19-year-old Abdul Arian announced the wrongful death suit and said that the damages figure was "equivalent to one million dollars per bullet."

The Los Angeles Police Department disputes the number, reports the Los Angeles Times, as officers maintain that only about 90 rounds were fired at the teen.

An attorney for the Arian family spoke with NBC LA on camera about the lawsuit. "Certainly, they should be cautious if they believe that a alleged suspect has a weapon," he said. "But it still doesn't give the police the ability and the legal justification to gun the victim down."

Last Wednesday, late night news viewers watched as a wild car chase on the 101 freeway ended in what seemed like an armed confrontation between the driver, Arian, and LAPD officers. In the video below, Arian can be seen raising his arms with his hands pressed together and spinning around to face officers as he runs away.

Footage from NBC LA shows the suspect being shot to death by police. WARNING: graphic.

Police fired more than 90 rounds in Arian's direction, killing him. Officers later discovered that Arian was unarmed throughout the entire confrontation, despite his frequent claims on a 911 call during the chase that he had a gun and was prepared to use it against the police. The Associated Press has some of the call:

"I have a gun," was one of the statements police quoted the man as saying.

"'I've been arrested before for possession of destructive devices, I'm not afraid of cops," he said.

"If they pull their guns, I'm gonna have to pull my gun out on them," he was also quoted as saying.

The 911 recording has not been made public, but Lt. Andy Neiman of the LAPD told ABC Los Angeles that Arian's family was welcome to listen to the call whenever they wanted. So far, the family has not taken up the police on their offer.

A funeral for Arian will take place Tuesday afternoon at a North Hollywood mortuary.

UPDATE: In a press conference before the funeral, lawyer Jeffrey M. Galen said that the police should have been able to see that Arian was unarmed.

This picture from the press conference shows Galen demonstrating the way Arian was holding his cell phone on the night he was shot to death. In earlier interviews, Galen alleged that Arian was not pointing his phone like a gun. Instead, Arian may have been photographing the officers in pursuit. 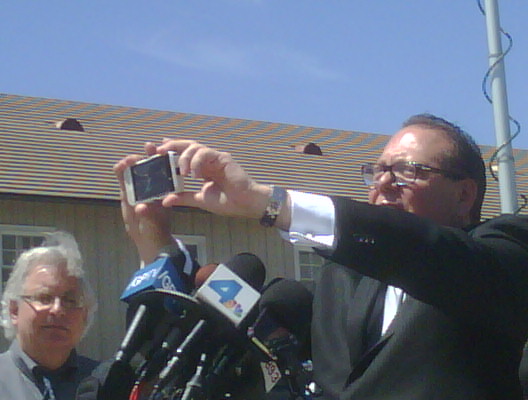 Photo by Claudia Peschiutta of KNX

Through Galen, the family has indicated that they are ready to listen to the 911 recording. "We are currently waiting for a copy of the 911 tape to be provided by the Los Angeles Police Department," Galen said to The Huffington Post. "We will be prepared to issue an updated release when that tape is released."

In a statement from Monday, Arian's family claimed that he had been harassed by the police on numerous occasions for driving a Ford Crown Victoria, which resembles a police vehicle. Arian was also characterized as a "scared teenager" who was "hounded" by police on the night of the car chase.