The apparel retailer has seen its reputation nosedive over the past two weeks since controversial comments made by its CEO Mike Jeffries resurfaced online, according to brand researcher YouGov BrandIndex.

(In case you missed it, Business Insider published a story that contained comments Jeffries originally made in an interview with Salon in 2006 saying he doesn't want "fat" or "not so cool" kids wearing his company's clothes.)

YouGov's BrandIndex measures positive versus negative feedback about a brand. The chart below illustrates consumer perception among 18 to 34 year olds as compared to American Eagle and H&M. 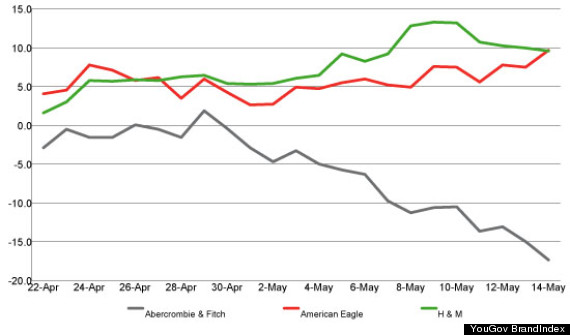 Jeffries is now doing his best to remedy the situation. He even posted a rebuttal on Facebook saying that his company is “completely opposed to any discrimination, bullying, derogatory characterizations or other anti-social behavior.”

But the mea culpa may not be enough. Many, including Kirstie Alley, have condemned Jeffries' comments. A YouTube video deriding Abercrombie and Fitch’s self-prescribed cool kid image has already reached over 4.5 million views.

A phone call request for comment from Abercrombie and Fitch was not immediately returned Thursday evening.