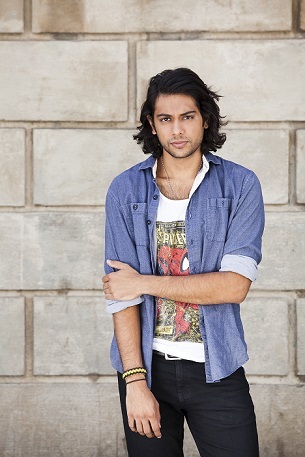 Abhi Sinha is a busy guy. Big on sports, Abhi fell into acting during college. Now really, how do you choose between sports and acting? Tough call that Abhi made! But look at him now!

We will see you in the upcoming film Blackhat mid-January as Detective C. Daniels, a computer expert working with the FBI. Describe your audition.

I think every actor has some sort of story behind how they almost missed an audition or made a unique choice. This was definitely one of those situations. It was a Friday afternoon and I was heading to Palm Springs for the weekend to spend time with my family. I got an email for this audition for Monday, which was fine since I was coming back Sunday. As soon as I arrive in Palm Springs, my manager tells me the audition has been moved up to Saturday...the next day, because Michael Mann was leaving town and wanted to view the audition tapes beforehand. I hopped back in my car, and two weeks later, was called back for a director's session with Michael Mann. The rest as they say is history.

You played the comedy relief in this summer's ABC Family's series Chasing Life. Some people say humor / comedy is one of the hardest things to do. How did you tackle your role as Danny Gupta?

I believe it was Bob Hope who said "Comedians don't say funny things; they say things, funny." In comedy, timing is key. As far as tackling the role, I really saw Danny as someone who likes to come off as a jerk without any social skills, but that this is perhaps a mask for some underlying self-esteem issues. To a certain extent, this describes me and probably most people. As an actor I am faced with constant rejection, which can really cause issues with self-esteem and certain defense mechanisms are often deployed, such as humor, sarcasm or even jerkiness. I just exaggerated those tendencies with Danny.

Well the air is definitely thinner up here. Just kidding. I definitely don't look down on anyone or hope I don't ever give that impression. I do like being tall, but it has its disadvantages, especially flying coach and getting a middle seat. I definitely got my height and looks from my grandfather. He is 6'2 and I recently came across a picture of him from when he was my age; the resemblance is uncanny.

Who's your favorite fictional superhero? Who's your real life hero?

Batman. He's, dark, mysterious and somewhat of the anti-superhero really. My real life hero is my mother. She is my rock and without question, the strongest and bravest person I know.

They're apples and oranges really. The biggest difference is definitely the allocation of work hours. In television your schedule is pretty set. In film however, you never really know what's going to happen. They're both exciting in their own right.

You were born in India. When did you come to America?

Yes, I was born in India and came here when I was a year old.

What are you most afraid of? Why?

Spiders. They hide, lurk about in corners and crevices. They're super fast, which is not surprising since they have eight legs. I consider that an unfair advantage. Not to mention they're just plain creepy.

What's your least favorite thing to do?

Waiting to go through TSA at the airport and then the person in front you has to remove everything and put it in a bin. I recently applied for and got Global Entry, so now I am eligible for TSA pre-check. I can hopefully take advantage of this soon.

What drew you to acting?

I have always enjoyed performing, whether in school theatrical productions, band, or sports. It wasn't until my freshman year of college at USC, that I was in a student thesis film that I began to think of acting as a serious career. I was majoring in sports journalism and neuroscience with the hopes of doing something that involved sports.

What brand clothing do you prefer?

I'm not really a brand kind of person, nor do I have a lot of knowledge about fashion. I grew up in Pittsburgh, PA where the only brands of clothing that mattered were a Steelers, Pirates or Penguins jersey. I guess if a like a piece of clothing or something stands out to me, I don't really care what brand it is.

What do you do in your downtime?

Simple things where I don't have to think too much, like hang out with friends and family. I like to listen to good music and sometimes make music with many of the talented people I know. Also, I play tennis everyday.

Well considering how shamelessly I self promote - I will say that for all "Chasing Life" fans - the show is back with a one episode Christmas special in December, and then season 1B airs in January. So just a little longer! Oh and finally, GO STEELERS!!!