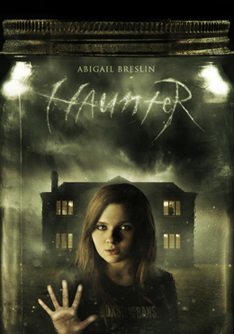 Abigail Breslin has #GhostWorldProblems in the new movie Haunter, in theaters now in New York and Los Angeles next week. The actor -- who has built an impressive resume with Signs, Little Miss Sunshine, Zombieland,and the upcoming Ender's Game and August: Osage County -- takes the lead in a big way in this paranormal suspense tale with a twist about a 15-year-old girl specter.

Directed by Vincenzo Natali, (Cube, Splice) Breslin is Lisa, a ghost who exists in a Groundhog Day of an afterlife with her parents and younger brother. They keep reliving the day in 1986; a day before her 16th birthday, and the day they all died. But it is Breslin's character who becomes self-aware of her situation, and proceeds to haunt Olivia (Eleanor Zichy), the teen daughter of her home's current occupants. Meanwhile, she herself is haunted by the malevolent ghost of a serial killer (Stephen McHattie, Pontypool) with the power to possess others -- and a connection to Lisa, Olivia and a series of other girls.

Although McHattie delivers a creepy turn as "The Pale Man," and Breslin is aided by Zichy and Samantha Weinstein, who plays another ghost, Haunter really rests on the performance on the 17-year-old actor. The film takes place in one home throughout a few time frames and is told from Lisa's perspective -- which means Breslin is in nearly, if not every, scene. Whether she is alone or interacting with another actor, she is working hard to portray a strong young woman in incredibly creepy environs.

Breslin joined me by phone from her home in Los Angeles to talk about her duties in Haunter, as well as share a little about her thoughts on the paranormal and her plans for Halloween.

What was the initial appeal of Haunter for you?

I've always loved horror movies. It is my favorite genre, so I always wanted to do a horror movie. Immediately after reading it, I just knew I wanted to be a part of it. I loved the story and thought it was so smart, clever and unique from a lot of horror movies I've seen.

Do you prefer supernatural or slasher horror?

I definitely prefer the supernatural horror films. I like slashers but would rather watch two hours of a creepy kind of story that leaves you thinking the whole time rather than one where someone takes a sledgehammer to four people. My favorites would be The Exorcist or stuff like that, and I loved Insidious and Insidious 2. I actually did love The Strangers, but that wasn't just a slasher flick.

Haunter kind of reminds me of an amped-up Goosebumps story from R.L. Stine.

Yeah, thank you! I have loved Goosebumps since I was little. I was that weird kid who liked The Haunted Mask. While all my friends were watching Barbie's Dream Vacation, I was watching Goosebumps. So yeah, I can definitely see that in Haunter. There's no blood in the movie, and it is just really all psychological and is a mystery.

You really take on a big lead in Haunter, so what are some challenges you faced with that responsibility?

It was an isolating process to be a part of because it was kind of just me for a lot of it. That was interesting. But I love the character so much. It is definitely challenging sometimes when you're all alone for 85 percent of it.

Did working on basically one set enhance your character's claustrophobia of being stuck in her house in the afterlife, or did it just drive you insane as an actor?

It did drive me insane! But I do think it helped. It is a very isolating movie and she is in the house pretty much the whole time. It did feel claustrophobic because I'd get there early in the morning and wouldn't leave until late at night. I never really saw the light of day. It did help a lot, though.

Stephen McHattie plays a great creepy ghost to your fairly wholesome one. How did you establish that chemistry?

"Vincenzo [Natali] kind of wanted us to stay away from each other because he wanted me to be afraid of him. So we'd be in the hair and makeup chair, and sort of not talk to each other. He comes off as ominous but once we wrapped, we actually talked. He's such a nice guy and the whole time I had been afraid of him a little bit -- which, I think, helped."

Do you have any of your own paranormal experiences?

I do have one really creepy story. I got this thing called sleep paralysis where you're awake and can see everything around you but can't move. I was staying at my friend's house and saw this woman and her dog come up to me in the house, and the next day I was telling my friend about it. She pulled out this family album and a woman in a picture was the woman I saw; it was my friend's mom. And her ashes were right next to my bed.

Does that experience make you want to break out the Ouija board like you do in one scene in the movie?

No, I don't want to try that. I do want to meet the Long Island Medium, however.

So you thought the Ouija board was creepy to shoot with?

Yeah, it was. Right after we called cut, I had a massive asthma attack and a lamp broke. I'm pretty sure somebody was pissed off we were playing with it!

Since this is a good October movie, what will you be doing for Halloween?

"I think I'll be hanging out with my friends and going to Knott's Scary Farm in L.A. We're just going to be scared and crazy, and go back to her place, watch horror movies and eat candy. It's what I do now that I'm in my late teens and can't really trick-or-treat now, even though I'd love to... I don't feel like I'm too old and still want to. I might just convince my friends to go trick-or-treating with me because that's what I really want to do!"