A former crime reporter turned artist is putting the "die" in dioramas.

"I look at figures that are designed to, say, mow lawns or wave at a train and figure out some way for them to do something else," Goldman told The Huffington Post.

That means a happy clown might be turned into a creepazoid out of a Stephen King novel or the man with the lawnmower may run over his victim with the instrument. Sometimes, she makes her murderous miniatures urinate on their victim.

"I'm not inspired by true cases," she promised. "I only do whatever I can come up with on my own."

Goldman, who is currently an investigator for the Las Vegas Public Defender's Office, started doing her to-die-for dioramas as sort of a lark after seeing pictures of model train set figurines engaged in wholesome activities.

"I said, 'Oh, look at all the little people! Wouldn't it be fun to have them hacking each other in half?'" Goldman, 30, told the Los Angeles Times.

Although she started doing the dioramas for herself, she has found that there are others who wish to decorate their homes with tiny crime scenes. She currently sells her "die-o-ramas" for between $90 to $500 and is backed up on orders through the next year.

"Some people in Beijing have bought them, but I have no idea what they do with them," she told HuffPost. "Maybe put them on the mantel with the family pictures?"

Goldman gets her figures from hobby stores and gets styrofoam and fake grass from Home Depot.

"I get the dirt from my own yard," she added. "I've become an experts on what kind of fixatives work best, but have to do that part in a well-ventilated area."

Although she has received requests for custom orders, Goldman is skittish about pursuing those opportunities.

"One woman asked me to do one that showed her catching her boyfriend in the act of cheating and shooting him in bed, but I thought that was more of a revenge fantasy than a diorama." 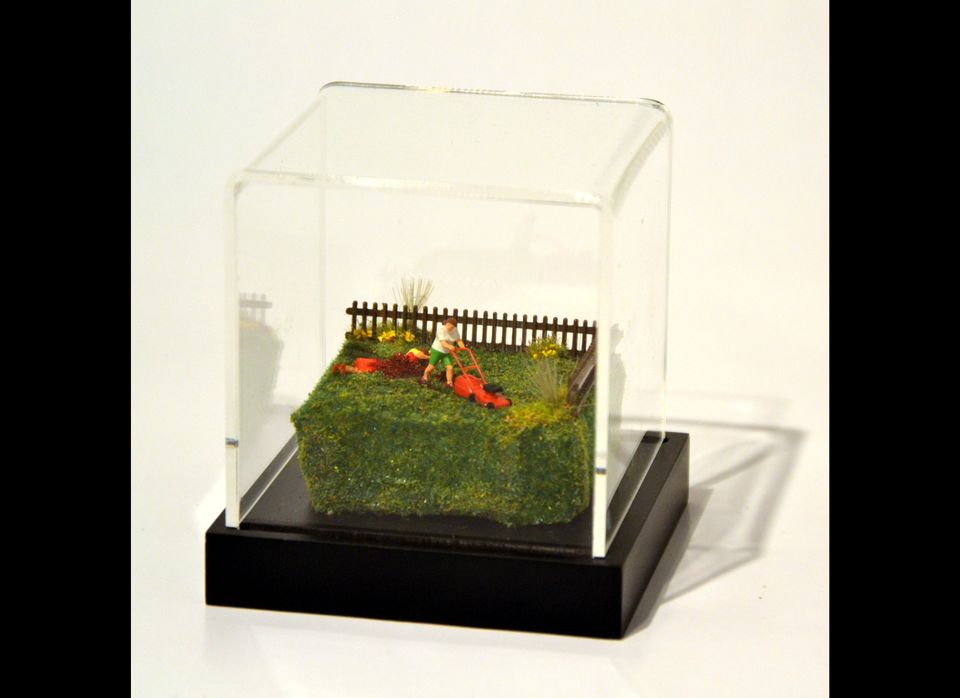 1 / 15
Mowing
A former crime reporter is now looking at the grisly world of murder and mayhem with an artistic eye.
Abigail Goldman/ Trifecta Gallery