PARIS -- The Iranian Revolution 35 years ago had two conflicting impulses exemplified by what could be called the legacy of "the two Khomeini's" -- the democrat and the despot. These dual legacies still underlay the tensions within Iran today.

In its initial phase, the Iranian Revolution was a departure from the violent and armed models of 20th century revolutions in Russia, China and elsewhere because it introduced a non-violent model of change. It was called at the time, "the victory of the flower over the bullet." The Shah was overthrown, freedoms were restored and the first democratic elections took place. The soft revolutions in Eastern Europe at the end of the Cold War followed this model.

But then the "coup within the revolution" that followed the overthrow of my presidency left a bloody legacy of intolerance and repression. The roots of the political violence across much of the Islamic world today -- in which different religious based groups vie for control of the state in order to impose their beliefs -- can be traced to this second act of the Iranian revolution. Ayatollah Khomeini was the first figure in modern times to sanctify and glorify violence in the name of Islam.

As a grand ayatollah, Khomeini knew well that, according to the Koran, the murder of one innocent person is equal to "the murder of all humanity." He also knew that one of the main principles of Islamic jurisprudence is that it is better to let 100 guilty people escape punishment than to punish an innocent.

Yet, in pursuit of total power over society, Khomeini appointed "hanging judges" who rationalized that they could execute anyone since -- if a mistake were made and they were innocent -- they would nonetheless end up in paradise. By the lights of this twisted wager, Khomeini ordered the execution of thousands of prisoners, turned a blind eye to the systematic use of torture in Iranian prisons and prolonged the Iran-Iraq war in which over two million people were killed, maimed or injured.

Surely, the violent ideologies of groups like Al-Qaeda that are so active today are nothing but Sunni versions of Shia-based "Khomeinism."

During the revolution, Khomeini had identified himself with democratic principles to such an extent that some in France described him as the "ayatollah libertaire." In over 120 interviews, he described Islam as a belief system of liberty in which political authority lay with the people. He once famously stated that "the criterion in Islam is the people's vote."

At the time, he also pointedly said that he would play no leadership role in Iranian politics, that the clergy would not interfere in the government and the empowerment of the people would result not only in the guarantee of democratic freedoms, but also in the equality of genders as well.

To a large extent, all these commitments were reflected in the first draft of the country's constitution in 1979, which he undersigned and even asked to be put to a referendum.

In those early days, he evinced nothing but the guiding principles of the revolution: independence, freedom, democracy, justice and development and a commitment to the non-theocratic spiritual Islam that embraced all of these principles.

One reason for the extremely high level of participation in the revolution was that a majority of people identified with these principles and could see a better future through their implementation. 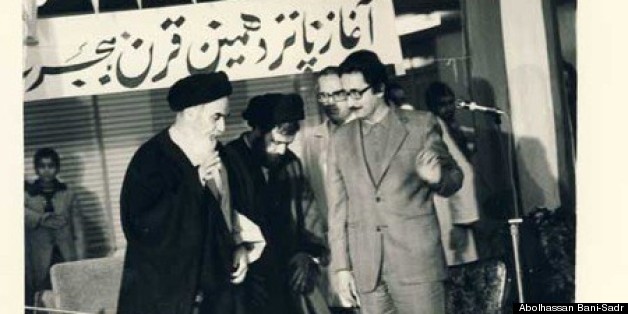 The fatal turning point which pitted the democrat against the despot came in the heady days of 1981 as we sought to create political order out of the chaos of the revolution.

When I exercised my constitutional right as president to call for a referendum so that people could decide whether they supported the democratic principles of the revolution -- which I advocated for -- or religious despotism -- which the ruling clergy favored -- it was clear I would win.

Fearing the marginalization of the clergy in a democratic state, Khomeini reneged on his commitments. He stated that even "if 35 million (referring to the population of Iran at the time) say yes, I say no." In June 1981, before the referendum could be put to the people, Khomeini, after some hesitation, blessed the coup against me on behalf of the power-hungry clergy. Acting as the final authority, he cast his single vote against the power of the people.

Although Khomeini is now long gone, his legacy and methods of control remain. The disastrous political turmoil which has perpetually afflicted Iran and led the country from one crisis to another -- of which the nuclear weapons showdown with the West is only the latest episode -- has been created by despotic forces which have always had little social support.

From the time of the revolution to the present day, they have sought to fill this legitimacy deficit by maintaining an atmosphere of crisis with the West, presenting themselves, much like Fidel Castro in Cuba, as defenders of the motherland.

Given the history of the ruling clergy and presence of a powerful military-financial faction within the regime, there is little doubt that after resolving the nuclear issue, the regime will need to create another crisis. This pattern will continue until Iranians decide to wrench the country out of the hands of the clergy.

In order for such a move to happen, several conditions need to be put in place.

First, the economic sanctions on Iran need to be removed. These not only weaken Iran's middle class and civil society -- the social force behind democratic aspirations -- but they also enrich the Revolutionary Guard generals beyond their wildest dreams through their ability to exploit black market trade.

Second, the threat of foreign military intervention needs to be completely removed. Iranians will not move against the regime, no matter how much they despise it, as long as they feel the territorial integrity of the nation is threatened.

Third, on the domestic front, the belief that reform is possible needs to be discarded. The nature, structure and history of the regime tells us that it is incapable of absorbing democratic reform. The linchpin of the regime is the absolute power of the clergy (velayat-e-motlageh-faqhi). Any attempt to loosen this tight grip will have a domino effect that can only lead to the collapse of the regime.

This is why it is repressing any and all attempts to question the absolute authority of the supreme leader.

Without directly taking on the authority of the supreme leader as the core issue, every reform movement will fail just as the Green Movement in 2009 did.

Thirty-five years after the revolution, Iran's only hope is if young people shed their fears of a new revolution and finally discard the illusion that reform is possible.

Many young Iranians fear a repetition of the 1979 revolution, which, as I have described, ended up reconstituting a dictatorship more repressive than that of the Shah's.

They don't know that this was not an inevitable result of the 1979 revolution, but the result of an armed coup by a minority of fanatics and opportunists against the very principles of the revolution that Khomeini himself originally embraced.

Knowing this could have a dramatic effect on the forms of resistance and make it possible to revive the interpretations of Islam which characterized the first period of the revolution that challenged both fundamentalism and the grip of the clergy on the state and society.

The experience of the 1979 revolution places Iranians in a unique position among Islamic countries. Having experienced life under a so-called "Islamic state" has taught most Iranians that a religious state brutalizes religion and sucks the spirituality out of society.

They have learned that it is impossible to have a democratic religious state, and that the separation of religion and state is the only way forward.

Outside of the big media and within civil society beyond the reach of the regime, a cultural revolution is stirring that promotes religious tolerance and a deep respect for human rights within the frame of an Islamic society.

Unlike 35 years ago when Iran had only a minority of democratic elites, today we have a large and educated middle class to support and defend separation of religion and state, a constituency large and robust enough to fill the kind of vacuum we had in 1979 that enabled the clergy to take over.

Returning to the goals and guiding principles of the 1979 Iranian revolution would create a truly homegrown and dynamic democracy, chosen by the people themselves and not imposed from outside. The effects of such a change in the region, the Islamic countries and the world in general cannot be overstated.

Without a doubt, a second Iranian revolution would have an impact no less far-reaching than the first.