Tipping is a strange, self-defeating phenomenon. The practice as we know it today has come to negate the very reason it exists: What started out as a reward for exceptional service has now become compulsory. "Tipping starts with people wanting to be generous, or to show off, but then it becomes something where people just do it because it's expected of them," says Michael Lynn, a professor of consumer behavior and marketing at Cornell University who has written more than 50 research papers on tipping. When we tip, we are essentially buying the right to avoid disapproval and guilt -- a uniquely first-world problem.

Still, tipping is a huge thing, accounting for around $44 billion in the U.S. food industry alone, according to the economist Ofer Azar. Polls show that Americans love to tip. "People like the power," says Sage Bierster, a waiter friend of mine who's been in the business for more than six years. But tipping brings with it a welter of problems: It's costly for taxpayers, it's often arbitrary (and even discriminatory) and it contributes to poverty among the waiters and waitresses who must grovel for our change to earn their living.

That's why I'm proposing that we abolish tipping. Just get rid of it entirely. Here are nine reasons to ban the begging bowls once and for all:

1. It Pushes Waiters Into Poverty (And Helps Keep Them There)

In most states, restaurants are allowed to pay waiters far less than the minimum wage. The federal rate for servers in the U.S. is just $2.13 an hour, and in 19 states, that's what servers make. Each state, though, has leeway to set a higher wage for servers. Twenty-four states have voluntarily raised servers' minimum wage above $2.13 an hour, and seven states have gone as far as requiring servers to be paid the same minimum wage as everyone else.

This is a great system for the restaurant industry, because it lets businesses pay less than the minimum wage in almost every state. But it contributes to poverty among the waiters and waitresses who toil in diners and other inexpensive restaurants across the country. (Servers in higher-end places tend to earn a livable wage.) In fact, servers are nearly three times as likely as other workers to experience poverty, according to a March 2014 report from the National Economic Council, the U.S. Department of Labor and others.

Tipped workers and their families often depend on welfare programs to survive -- and they do so at significantly higher rates than non-tipped workers, according to a 2014 report from the Economic Policy Institute, a think tank focused on labor issues. "Tipped workers are heavily reliant on public subsidies to help make ends meet," said Sylvia Allegretto, a research economist at the University of California, Berkeley and a former waitress, who co-authored the report. "Who helps them bridge the gap? Taxpayers."

2. Servers Make Less Per Hour Than They Used To... 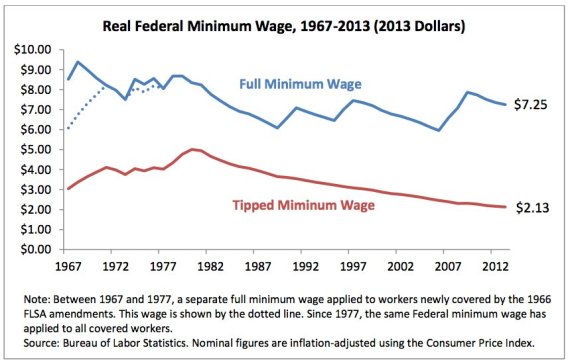 The current federal tipped minimum wage for servers, $2.13 an hour, is exactly the same as it was in 1991, when the regular minimum wage was $4.25.

"What a boon to the restaurant lobby, that for 23 years in a row they've been able to pay the same low wages [to servers]," said Allegretto.

It's generally accepted that when you go out to eat, you're supposed to leave a 20 percent tip for good service. But most people don't tip that much, according to a survey conducted earlier this year by the coupon site Vouchercloud. The company polled more than 2,600 adults from all over the country, asking them what percentage of the bill they usually leave as a tip when they dine out. Just 23 percent said they leave a 20 percent tip, and about half the survey's respondents said they tip less now than they did five years ago, with the majority saying it was because their "financial situation had changed."

4. Abolish Tipping, And Customers Will Still Spend The Same Amount

Here's one argument you often hear in favor of keeping the tipped minimum wage so low: If restaurants have to pay servers a higher hourly wage, they'll be forced to increase menu prices and that will drive business away by giving people "sticker shock." But in all likelihood, the price hike of your meal, or the mandatory service charge tacked on in lieu of a tip, would be roughly equal to what you would have paid in tips anyway. In reality, customers already pay 100 percent of servers' wages, said Azar, who has done extensive research on the subject.

"Restaurant owners don't bring money from their own personal pocket to pay servers," said Azar. "Whatever they pay waiters is from the restaurant revenues, and [those revenues] come from customers paying. It makes no difference if these payments are called tips, prices, or service charges."

So if you're bothered by restaurants that add a mandatory service charge to the bill, don't worry: You're paying the same amount, albeit in a different form, that you normally would. 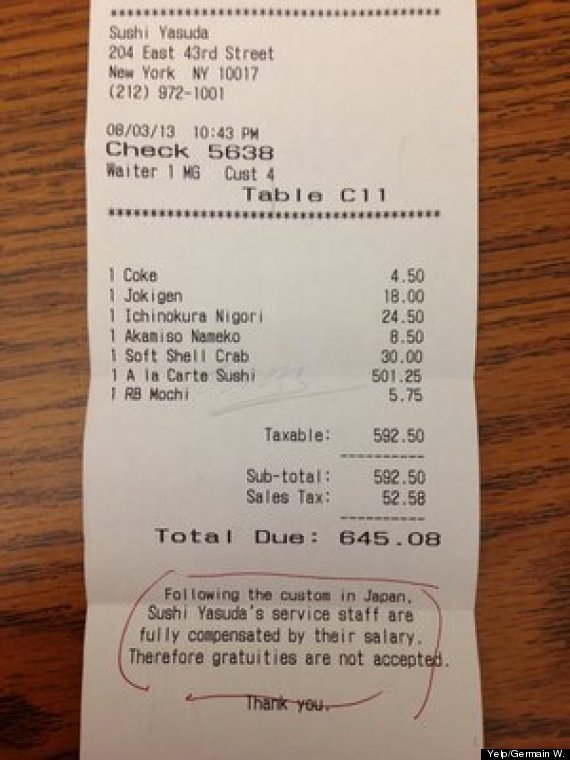 5. Paying Waiters A Low Hourly Wage Can Be Bad For Restaurants' Profits

According to a 2014 report by the union-backed Restaurant Opportunities Center (ROC), those states that legally require restaurant owners to pay servers higher hourly wages also have higher per capita restaurant sales. Why? Because, the report says, when workers make more, they stay at their jobs longer, increase their productivity and spend more of their own money at restaurants.

Packhouse Meats, an independent eatery in Newport, Kentucky, is one establishment that's already experienced the benefits of paying waiters a guaranteed wage. Servers at Packhouse Meats make $10 an hour or 20 percent of their sales -- whichever amount is greater.

The online menu for Packhouse Meats alerts customers to its no-tipping policy.

"We have very low turnover here, because our waiters don't want to leave," said Packhouse manager Kurt Stephens. Low turnover means the restaurant spends less time and money training new servers, and so it can provide a better experience for customers, according to Stephens.

"We end up saving a hefty sum," he said, "and the feedback I get from customers is, they love it, because the price on the menu is exactly what they end up paying."

6. When People Tip, They Discriminate

Every waiter knows that tips are unpredictable -- sometimes you'll earn 10 or 15 percent just because your customers don't like you. Worse, sometimes they don't like you because of the way you look. Studies by Michael Lynn, the Cornell professor and tipping expert, have shown that waitresses with larger breasts, smaller body sizes and blond hair tend to earn more tips than waitresses without such attributes. A separate study by Lynn found that white servers are tipped more than black servers for the same quality service and regardless of the race of the customer.

7. Tipping Culture Is An Incubator For Widespread Sexual Harassment

The tipping economy is particularly unfriendly to women. According to an October 2014 report from ROC, 80 percent of female servers say they've been sexually harassed at some point in their careers, and sexual harassment is more prevalent in states that only pay servers the federal sub-minimum wage of $2.13 an hour, as opposed to states that mandate a higher minimum wage.

"Since women restaurant workers living off tips are forced to rely on customers for their income rather than their employer, these workers must often tolerate inappropriate behavior from customers, co-workers, and management," the report says. "This dynamic contributes to the restaurant industry's status as the single largest source of sexual harassment claims in the U.S."

We like to think of our tips as a reflection of how well a server did his or her job. But in reality, the reasons we tip are often irrational. Research has found that we tend to tip waiters more if they touch us on the arm or draw a sun or a smiley face on our check. We also tip servers who wear red or squat next to the table more than we do servers who wear other colors or remain vertical while working.

What's more, lots of people like tipping because they believe it gives them power -- they think that leaving a small tip, or no tip at all, sends a message to a server that he or she needs to do a better job next time. (See Steve Buscemi's "Reservoir Dogs" rant, above.) In reality, multiple waiters I spoke to for this story said that getting a substandard tip tells them very little.

"If you had a bad experience, say something to your waiter, say it to a manager, but don't say it with your money," said my friend Sage, who has spent years waiting tables and managing various New York restaurants. "There could be a million reasons your experience wasn't good. But you leaving a 10 or 15 percent tip with no explanation, it tells me nothing."

As already mentioned, for many servers in cheaper restaurants, the tipped minimum wage contributes to poverty. But in high-end restaurants, tipping leads to a different form of income inequality. When menu prices are higher, servers often end up making a lot more in tips than kitchen staff, who have equally valuable skills but are often paid modest wages.

Because the Fair Labor Standards Act restricts servers from sharing their tips with workers who aren't directly engaged in customer service, some upscale restaurants have banned tipping altogether in favor of a service charge, which those restaurants can use to pay their employees more equitably.

The restaurants Next and Alinea are sister establishments in Chicago. Neither is cheap. (With wine pairings, the bill at either restaurant can easily exceed $300 for one person.) Customers at Next and Alinea pay a mandatory 20 percent service charge, a system that co-owner Nick Kokonas says allows him to pay all his employees a fair, performance-based wage, whether they're waiters or sous-chefs.

"Before, we could only share gratuities, which were a large portion of our revenue, with a small amount of the staff" -- namely, the servers, Kokonas said. Having a service charge "allows us to run a much more balanced and efficient operation."

Getting Rid Of Tipping Will Take Time

A bill introduced last year, the Fair Minimum Wage Act, would re-couple the hourly wage for tipped workers to the minimum wage. If it passes, every restaurant in the country would have to pay servers a rate equal to 70 percent of the national minimum wage. But the bill is opposed by the restaurant lobby and a number of Republican lawmakers, and it has only a minute chance of passing this year.

Still, despite political opposition, there's public support for both a higher national minimum wage and a higher wage for tipped workers. A 2004 poll cited by Lynn in his research paper "Tipping and Its Alternatives" found that only 22 percent of respondents said they would prefer waiters to be paid in tips instead of regular wages. Thirty-four percent said they had no opinion, while 44 percent said they would prefer waiters to be paid a guaranteed wage. Still, people love to tip. A survey conducted by Azar in 2010 found that 60 percent of Americans prefer tipping to a service charge.

Why are we so enamored of this strange, antiquated custom?

Michael McGuan, a former manager at the Linkery, a now-closed San Diego restaurant that was one of the first to outlaw tipping, offered some insight into why we're so gratuity-obsessed. Speaking to The New York Times Magazine in 2008, McGuan said that Linkery customers would sometimes get offended when told they weren't allowed to tip.

"I'll go over to the table and ask if there is a problem with the service. If there is, then I offer to remove the service charge," McGuan said. "Almost always, the customers' issue isn't about the service but about not being able to handle their loss of control."