Most Americans would favor sweeping new national restrictions on abortion after the 20th week of pregnancy, according to a new HuffPost/YouGov poll. But the poll also shows many Americans remain conflicted in their views on abortion.

By a margin of 59 percent to 30 percent, respondents to the new poll said they would favor a federal law banning abortion after 20 weeks of pregnancy.

A recent United Technologies/National Journal poll found Americans divided over the possible ban, with a narrower plurality of 48 percent to 44 percent supporting it.

Wide variation in poll results is not unusual when pollsters ask about public policy issues, but the reason is usually public disengagement. Most Americans are unfamiliar with the details of many issues and legislative proposals, and so when asked about these, survey respondents often form opinions on the spot based on question wording.

With abortion, however, poll results frequently appear to vary for another reason. Americans have a variety of firmly held attitudes about abortion -- often grounded in personal experience or the experience of friends or family -- that are sometimes in conflict.

Results from the HuffPost/YouGov poll illustrate two of the most important conflicting attitudes. When asked about the morality of abortion, for example, roughly half say they consider abortion "morally wrong" (49 percent), while more than one-third say it is either "morally acceptable" (12 percent) or "not a moral issue" (24 percent). Another 15 percent are unsure.

At the same time, however, a large majority (63 percent) say that the statement "decisions on abortion should be made by a woman and her doctor" comes closer to their opinion on abortion, while only 26 percent say "government has a right and obligation to pass restrictions on abortion." 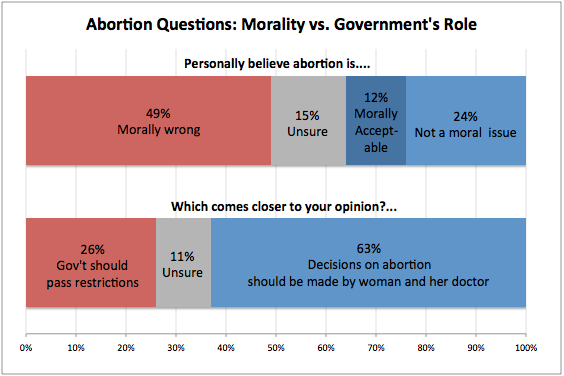 Combining responses to these two questions shows that a third (33 percent) take the "pro-choice" position in both instances, nearly a quarter (24 percent) take the "pro-life" position both times, but the largest group (38 percent) is conflicted. Most of these conflicted respondents (30 percent of the total) say that abortion is morally wrong (or are uncertain about its morality), but also believe that decisions on abortion should be made by a woman and her doctor, not the government.

These conflicting attitudes among the middle group help to explain the variation on polling results, and the receptivity of many Americans to "some" (but not all) restrictions on abortion. Most respondents who held consistently anti-abortion or pro-abortion rights views on the morality and role of government questions also fell into the corresponding categories on whether abortion should be generally legal or illegal. But the conflicted respondents tended to fall into the middle two categories -- saying that abortion should be legal in some situations, but not in all. 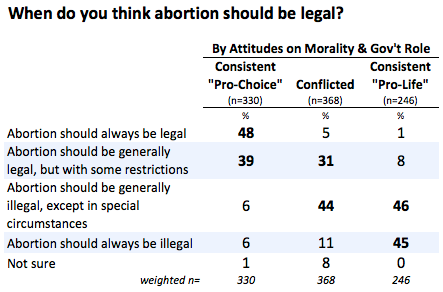 But the underlying clash of values -- on morality and government's role -- tells only part of the story. "These kind of up-or-down [questions] on 20-week bans don't capture what happens in real life," Democratic pollster Anna Greenberg explained in a recent interview with The Huffington Post, "because in real life, people think abortion is a very complicated issue." Greenberg, who conducted a recent poll on the issue for the Texas chapter of the American Civil Liberties Union, said that in focus groups, voters say "that you can never really know what somebody's individual circumstances are, and they can almost always think of some set of circumstances where it would be okay to have an abortion, whether that's rape, incest, life, health or other reasons."

Put it all together, and questions that focus on specific policy changes on this issue can be highly sensitive to question wording and the specifics of how a proposal is portrayed. (A proposal viewed as one that might shut down abortion clinics entirely, for example, might be viewed in a less favorable light.)

1 / 11
Defunding Planned Parenthood
Planned Parenthood has become such a reliable punching bag for social conservatives that it would have been more surprising if former Sen. Rick Santorum (R-Pa.) <em>didn't</em> include defunding the women's health services provider as a staple of his recent three-point plan to revitalize the GOP. “[W]e are going to push Republican congressional leaders to defund the monstrosity that is Planned Parenthood,” Santorum said in an April fundraising plea, <a href="http://www.rawstory.com/rs/2013/04/07/rick-santorums-plan-to-revitalize-the-gop-defund-planned-parenthood/" target="_blank">according to Raw Story</a>. “Too many in the GOP want to ignore the millions of innocent lives that have been extinguished by this vile organization. Defunding Planned Parenthood is a winning issue. The polls prove it.” If threatening Planned Parenthood -- and the pap smears, STI screenings, breast exams and contraceptives that comprise 97 percent of its services -- seems somewhat passé, that's because it kind of is. The biggest state push to strip the organization of funds came from Republicans in 2011 and 2012, and while some laws were passed, most have been found unconstitutional by court rulings. The GOP's demonization of Planned Parenthood <a href="https://www.huffpost.com/entry/defunding-planned-parenthood-polls_n_913685" target="_blank">has been</a> <a href="http://thinkprogress.org/health/2012/03/06/439059/texas-poll-planned-parenthood-defunding/" target="_blank">far more unpopular</a> than Santorum suggests, but that didn't stop congressional Republicans from eagerly continuing their crusade to eliminate its federal funding earlier this year with a <a href="https://www.huffpost.com/entry/planned-parenthood-funding-_n_2434592?1357683076" target="_blank">pair of new bills</a> that haven't moved forward.
Getty Images