Nearly 40 years after the landmark Roe vs. Wade Supreme Court decision legalizing abortion nationwide, forces on both sides of the contentious issue lined up this weekend for marches in San Francisco only a few blocks from each other.

This Sunday, the city played host to both the West Coast Rally for Reproductive Rights at Justin Herman Plaza, put on by the Bay Area Coalition for Our Reproductive Rights, and the Walk for Life, which began at the Civic Center and then traveled down Market Street ending at the very same plaza as the pro-choice rally.

Instead of following its traditional annual route continuing though the plaza, down the Embarcadero and concluding at Marina Green, this year the walk ended just short of Justin Herman Plaza due to a scheduling conflict with the other event.

While the Walk for Life had significantly higher attendance than the West Coast Rally for Reproductive Rights--thousands marched down Market Street while only about a hundred pro-lifers gathered at Justin Herman--the latter featured an appearance by State Senator Mark Leno, who spoke about the importance of open access to a full range of reproductive options.

While there were some clashes between the two groups, police reported that both sides remained civil and there were no arrests or physical altercations of any kind.

"Abortion hurts women," Walk For Life co-chair Eva Muntean told CBS San Francisco, noting that the San Francisco Bay Area has one of the highest abortion rates of any region of the country. "We know personally of a lot of women who are hurting from their past abortions."

In the weeks proceeding the rallies, a group affiliated with the West Coast Rally for Reproductive Rights placed a series of banners with pro-choice messages such as "U.S. Out Of My Uterus" and "Catholics for Choice" on lighting poles up and down Market Street. The organizers of the Walk For Life objected and sent a letter asking the city's Planning Department to remove the banners before their march.

"Many women are angry that our health is being used as a political football, in attempts to divert attention away from the troubled economy," wrote Ellen Shaffer, the co-director of the Center For Policy Analysis, the organization that placed the banners, in a blog on The Huffington Post detailing the reasoning behind the banners' creation. "We need the government to fix the economy and to fund vital basic health services, and to quit interfering with our private decisions about our reproductive health. But instead, in 2011 Congress and state legislatures declared a 'War on Women.' "

Check out this slideshow of pictures from both the Walk For Life and the West Coast Rally For Reproductive Rights:

Dueling Abortion Rallies In San Francisco: Demonstrations Both For And Against Happen Mere Blocks From Each Other (PHOTOS) 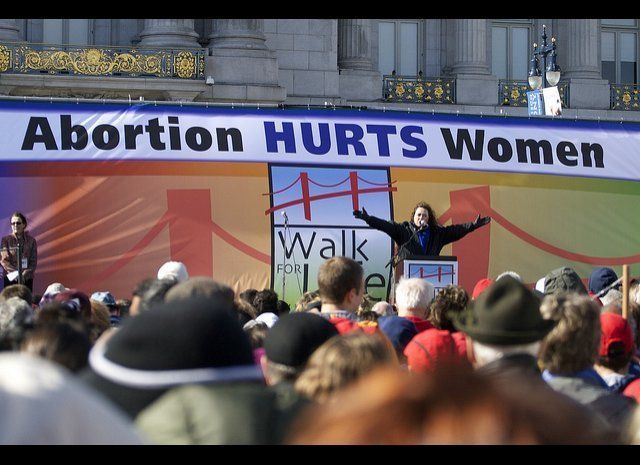