The states with the highest number of abortion restrictions also have the fewest policies in place to support women and children's health and well-being, according to a new report released Wednesday by reproductive rights groups.

The study, conducted by Ibis Reproductive Health and the Center for Reproductive Rights, found that a state's performance on indicators for women and children's health and well-being is inversely proportional to the amount of anti-abortion laws in that state. States with mandatory ultrasound laws, mandatory waiting periods and shorter gestational limits on abortion, for example, generally have higher rates of obesity, child and maternal mortality, teen births and women and children without health insurance.

The report comes at the tail end of a three-year wave of new abortion restrictions. States enacted more abortion restrictions between 2011 and 2013 than they had in the entire previous decade, and more than 250 anti-abortion bills have been introduced in state legislatures this year alone. These include mandatory waiting periods, counseling and ultrasounds before abortions, harsh building standards for abortion clinics, insurance coverage restrictions, gestational limits and restrictions on non-surgical medication abortions. 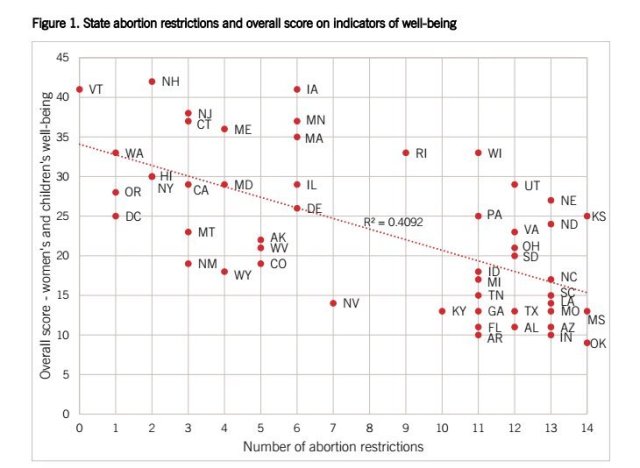 Three states -- Kansas, Mississippi and Oklahoma -- have fourteen anti-abortion laws each on the books. Twenty-two states have 11 to 13 abortion restrictions in place, and only one state, Vermont, has zero, according to the report.

Vermont, along with New Hampshire and Iowa, scored the highest in terms of overall indicators of women and children's health and well-being. New Hampshire has only two abortion restrictions, and Iowa has six.

Most states with more than 10 abortion restrictions in effect, including Mississippi, Oklahoma, Arizona, Indiana, Florida, Arkansas, Alabama, Louisiana, Missouri and Texas, scored near the bottom.

The report considered a wide variety of indicators of well-being for women and children, such as asthma prevalence, the percentage of adult women who had received a pap smear in the past three years, drug abuse, HIV and domestic violence incidence, maternal and infant mortality rates, children receiving dental and mental health care, high school graduation rates and the number of suicide deaths among women. The report also considered policies that support women and children's health, such as whether a state had moved forward with Medicaid expansion, requires reasonable accommodations for pregnant workers and implements strong family and medical leave policies.

The report's main limitation is that it does not adjust for poverty, which is a major contributing factor to people's overall well-being. But the report notes that low household income does not explain all of the differences among the states in these areas. Texas and Arizona, for example, are middle-income states, but have some of the lowest scores for women and children's health. And three of the poorest states in the country -- Montana, New Mexico and West Virginia -- received higher scores for health and well-being than other poor states with more abortion restrictions.

“This report exposes the flimsy claims of politicians who have been shutting down women’s health care providers under the patently false pretext of protecting women’s health," said Nancy Northup, president and CEO at the Center for Reproductive Rights. "It clearly demonstrates how women and families have suffered as politicians put their ideological agenda before the real needs of their constituents."