Given my history, I constantly have my ears tuned into the state of women's rights and women's freedom. And as a mother of two daughters, my concern grows daily.

In my memoir, Beauty Disrupted, I had a lot of ground to cover so I couldn't possibly include all the details of my life. I had to be thoughtful about my sharing -- what, how much, how explicit -- with the intention of explaining my healing process and making a difference for others, rather than being exploitative just for the sake of enticing readers or satisfying curiosity. Now I find myself at another crossroads, wondering about the potential benefits of sharing more of my personal experience in the public sphere. After careful thought, I've decided that by opening up about more of my past, my voice can contribute to the fight to make a difference in the present.

As a teenager, like many young people, I was sexually active. I was also a drug addict, incredibly immature, undeniably irresponsible and quite self-centered. And with my dangerously naïve, youthful perspective, I did not understand the potentially devastating consequences of my choices and behaviors. I became pregnant at 16. And as painful and harrowing a decision as it was, I opted to have an abortion.

I'll never forget the emotional horrors of that decision-making process. I was disconnected from my parents, so telling them I was pregnant felt impossible, given that telling them about anything -- a mall-outing, a classroom experience or even a movie I'd seen -- was a total rarity. I had no financial resources, no emotional support and hadn't finished my education. I was terribly conflicted: as much as I thought I would be a somewhat okay mother, I knew that in most ways I was utterly unprepared. And "somewhat okay" mothering just didn't seem good enough. A baby deserves more than that. But despite all the overwhelming data indicating that I wasn't ready, the choice was still one of the hardest I've ever had to make.

I look back often. I wonder who that child would be, how my life would've played out and where I might be today had I not had a choice in the matter. Today, as a happy wife with two incredible children, I'm so thankful that I was born in a time when that option was available, when this freedom of
choice
was legal. It's safe to say that all the growing I needed to do, all the therapy I participated in and all the healing I've done have made me an available, loving and wise mother. Had I chosen to have a baby at 16, I wouldn't have been able to provide adequate parenting and would've undoubtedly passed on some serious family dysfunction. 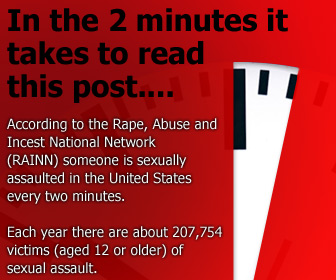 While this pregnancy was a result of consensual sex, I was raped just one year after. I didn't get pregnant then, but I sometimes wonder what would've happened if I had, particularly if abortion had been illegal then. What kind of horrifying experience would I have had to endure, what other kind of violation would I experience, if I had to resort to illegal measures?

Today, the very same freedom I had -- to make the appropriate choice for my life and my body -- is being threatened. The hands of time seem to have been rewound and the freedoms women fought so hard for in the '60s and '70s are in serious jeopardy. I can't help but worry for my daughters. I pray they will have the same freedom of choice that I did.

Meanwhile, the rates of sexual violence against women are on the rise, increasing my grave concern for the rights of women, here and across the globe. I see that sisters, daughters and mothers in too many countries are suffering terribly. And frankly, I can't feel any real sense of security as a woman until all women on this planet are safe. While I'd like to believe that because I live in the United States I'm unassailable and my freedoms are protected, that's just not the case.

My daughters, your daughters, our daughters deserve safety, protection, and the freedom to make their own choices about their personal lives and their physical selves. They deserve to be protected against violence. They deserve to feel out of harm's way in their own homes as well as on our shared streets. Anything less is a violation of human rights, a violation of a universal law declaring that as humans, we seek to respect and protect one another.

Sometimes when I take in the latest news about the ongoing debate surrounding the moral and legal status of abortion, I'm tempted to ignore it altogether. For fleeting moments I want to tuck myself underneath my covers and pretend there's no debate of any consequence and that any threat to women's right to choose is minimal. Then I practice some magical thinking, imagining that the situation will resolve itself soon, in my favor, because good will prevail and those who are anti-choice will be outvoted, or just come around to my way of seeing things. Or maybe, I think, all the powerful folks out there -- the pro-choice politicians, the grass roots activists, the celebrities -- they'll fight the fight for me. Thank goodness for them!

And then I wake up. I realize that I have resources within me to make a difference.
Now.

I believe that as women, we must commit ourselves to sustaining the progress made by our foremothers who fought so hard for women's equality and liberation. Together, as a powerful and multigenerational sisterhood, we can stand up, speak out, hold hands and be the creators that women ARE. We must create both unity and action to ensure that every woman and girl is safe, protected and free.