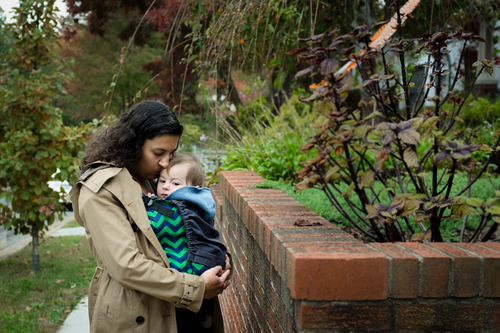 Mothers, please listen. There are words I never want to hear in the same sentence. There are things that should never appear in the same photo. Two of them are "baby" and "gun." Yet, just a few days ago during my idle scrolling through facebook I saw a sentence that included these words. I saw a photo that showed a mother, wearing her baby on her back and holding a gun. The baby was wearing ear protection, but not hunter's orange. I stopped short but didn't say anything. Surely, I thought, others will speak up. Others will let this Mother know that is not safe, that she being reckless with her baby.

The photo appeared in the Facebook group, Tula Love. A group of thousands of mothers who, like me, wear their babies in the Tula brand of baby carriers so that they can keep their babies close to them, hands-free, throughout the day. Most of the posts are about fantastic new styles of Tulas, or photos of Moms shopping in Target with babies strapped to their chests while drinking Starbucks, or loving images of fathers and grandparents wearing their babies while out for a walk. The one and only time I posted in the group it was a photo of me wearing my sleeping baby in a Tula while I helped his big sister navigate some tricky playground equipment. In the group, we all love our Tulas for allowing us to hold our babies close while doing all of the things that need to get done in everyday life. The photo of the gun-toting, baby-wearing Mom was an anomaly, one which I thought would be addressed immediately for being so out-of-place, so clearly unsafe, so clearly wrong.

So, I was more than a little surprised when later the same day another post appeared from the Mom who wore her baby on her back to shooting practice, this time thanking the administrators of the group and the group's many members for their support. Wait - what? Was I crazy? Was I the only one who thought it was insane to wear on infant on your back while shooting a gun for fun? I am strongly in favor of gun control laws, but were my views on the Second Amendment really what was driving my even more strongly held views that shooting a gun while holding an infant was unsafe, reckless behavior? Was this even legal, even in what appeared to be the mother's home state, the pro-gun North Carolina? Wasn't it child endangerment? What would Tula think of their baby carriers being used in such a manner? Were more Mothers not aware that in 2015 toddlers have shot themselves or others on weekly basis while the gun lobby and pro-gun politicians continue to argue that problem isn't guns but mental illness?

I was banned from the group for making a reference to the so-called mentally ill toddlers who have, so far this year killed two bystanders and in 13 cases killed themselves so I do not know how many others might have been removed from the group for raising concerns about the safety of shooting a gun while wearing an infant or if the information that this is not, in fact, safe behavior was ever shared.

Nevertheless, I took my questions to where mother's from all walks of life reside - back to Facebook. A couple of mothers, one pro-gun control and the other pro-responsible gun ownership agreed that shooting with an infant strapped to your body was unsafe and joked about the need for Bulletproof Bjorns that would be sold alongside shotguns in Wal-Mart. One mother, who grew up around guns and advocates responsible gun ownership responded " there really is no need to go shooting with an infant on your back. But again, I am not going to tell another mother what to do. .... I have questions on the safety of it, too. But I also believe in that mother's right not to answer them if she doesn't want to."

Out of a deep sense of concern and curiosity I sent a message to the National Rifle Association through their Facebook page asking their opinion about whether it was safe to shoot a gun for recreation while wearing a baby strapped to your back. I did not expect any response, but the response I got was a fast and decisive "I would not do so." There it was. The NRA would not do so. Yet, still, other mothers felt compelled to support and praise the Mom who publicly and proudly goes shooting for fun while wearing a baby. Even some Moms who were pro-gun but recognized this situation as dangerous would not question the mother's actions. 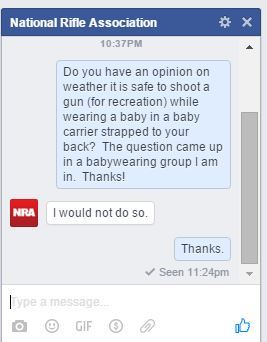 Had the debate over gun control gone completely haywire, from the right to bear arms to the right to fire arms while holding an infant? Were mothers afraid that raising concerns about shooting a gun for fun while holding an infant would label them as anti-Second Amendment? The NRA didn't think so. Was there another reason why more mothers had not raised concerns about the safety of this mother's actions?

Mothers, I love how we support one another. I do not think there should be judgment or questions about so many of the deeply personal choices that we make in the interest of what is best for our babies and our families. We should not judge another Mother for working outside the home or staying at home; for feeding her baby with her breast or a bottle; or for sleeping in bed with her baby or letting her baby cry-it-out; for being a free-range parent or Helicopter Mom; or for allowing unlimited screen time or banning all electronics.

But, please, Mothers, please, when there is something clearly unsafe happening involving a child we need to speak up, we need to question, we need to judge. If a car seat is being used improperly, if a child is not wearing a helmet, if a mother is physically injuring her child we need to call that Mother out. We need to educate her and do what we can, whatever we can, to protect that child as we would want someone to protect our own. And, regardless of your views on the second Amendment we definitely, definitely need to speak up when someone is not handling a gun in a responsible manner around a child. Mothers, there is no shame in taking action to protect the safety of a child. There is love in that action, there is compassion, there only common-sense. There is the power to prevent tragedy.