When Timothy Greenfield-Sanders set out to make a documentary about aging supermodels, he probably didn’t expect to make a film about power. But there it is -- his documentary “About Face: Supermodels Then and Now,” which premieres on HBO July 30, is a portrait of beautiful women who enjoyed enormous acclaim at the height of their careers, and have found a different type of power altogether in aging, or perhaps in spite of it.

“How do you stay relevant? How do you combine all the things you learned and do something new and be in demand? When you look at the women in the film, their success was all based on beauty that fades,” he said.

Greenfield-Sanders stumbled upon the project by accident. In September 2009, he attended a ‘70s-and-‘80s themed party in a New York nightclub thrown by hairstylist Harry King, who invited 200 cover girls from the halcyon days, along with stylists, makeup artists and the like.

“I went to the party and met some of the women and left that night thinking there was a portrait there,” Greenfield-Sanders said. He lined up a magazine to finance the shoots in New York and L.A., and then invested his own funds in filming interviews with more than a dozen supermodels, who range in age from their mid-40s to their 80s. The film intersperses the contemporary interviews with gorgeous stills and footage from the past, and was featured at the Sundance Film Festival.

“They are, in a sense, model subjects, in that they’re perfect; they are more beautiful than everyone else, they’ve experienced a loss of beauty in a much more dramatic way and can articulate about it,” he said.

What they articulate is a larger message about finding self-acceptance in a culture that disdains aging –- a culture that, ironically, their perfection helped to create. Isabella Rossellini, who was dropped as the face of Lancome when she reached her 40s, says she thinks about plastic surgery and wonders, “Is this the new foot-binding? Is this a new way of being misogynist? Is this a new way to tell women ‘you are ugly?’” Later she bursts into laughter as she describes being dropped from the A-list party invitations -- which now go to her daughter.

Jerry Hall, a charming storyteller who at 50 is still larger than life, notes: “I think it’s bad that we have as role models people who look scary to small children. … They’re cutting up their faces...they take fat from their bottom and they stick in their lip so when you kiss them you’re kissing their bottom. That is so disgusting.”

Adds China Machado, 81: “It’s not that women want to stay young. It’s that the whole society makes us want to stay young. It’s nothing to do with us –- you keep thinking you’re going to be judged. The most important thing you have that will make you look different than someone else is your expression. So you change that … take out the lines, but then there’s nothing left of you.”

Or as Paulina Porizkova concludes: “To me the most beautiful thing there is in another human is confidence, and nothing says ‘I’m not confident’ as much as Botox.”

But Carmen Dell’Orefice, 81, who started modeling in 1947, is defiant: “If you had the ceiling falling down in your living room would you not go and have a repair?”

The women evoke the excitement and glamour of the fashion world -– the creativity, the parties with Salvador Dali and Andy Warhol, the money. “We lived the greatest adventure of all in those days,” says Marisa Berenson. But the film also touches on the dark side –- sexual harassment, racism, drug addiction, eating disorders and AIDS, which Porizkova describes as “a fire that just went straight through the heart of the business."

The subjects don’t talk so much about reinvention and second acts as their philosophies on aging. “When I finished my college education my agent said to me …’The key to beauty is to be always educating yourself, always learning something new, always doing something new and to have something to talk about,’” said Cheryl Tiegs, “and I never forgot that, and I think that’s how one ages beautifully.”

“I found they all had a certain inner strength –- maybe it sounds like a little cliché but I think it’s true,” Greenfield-Sanders said. “I’ve been married 34 years. I love strong women, I love confidence in people and it’s a theme in the film.”

With a shake of her blond mane and mischievous smile, Jerry Hall exemplifies that confidence: “Of course it’s no fun gettin’ old and sick and dyin’ -- we all know that’s comin’ and it’s a bore,” she says in her Texas twang. “But people are living longer, they’re healthier longer, they have sex longer. Why shouldn’t we be allowed to age and why shouldn’t we be respected for it? When I turned 50 I felt a sense of achievement. I’ve lived 50 years! I made it. I think there’s something to be said for that and to be celebrated.”

'About Face': Timothy Greenfield-Sanders' Film Focuses On Aging Supermodels
&#039;About Face: Supermodels Then And Now&#039; 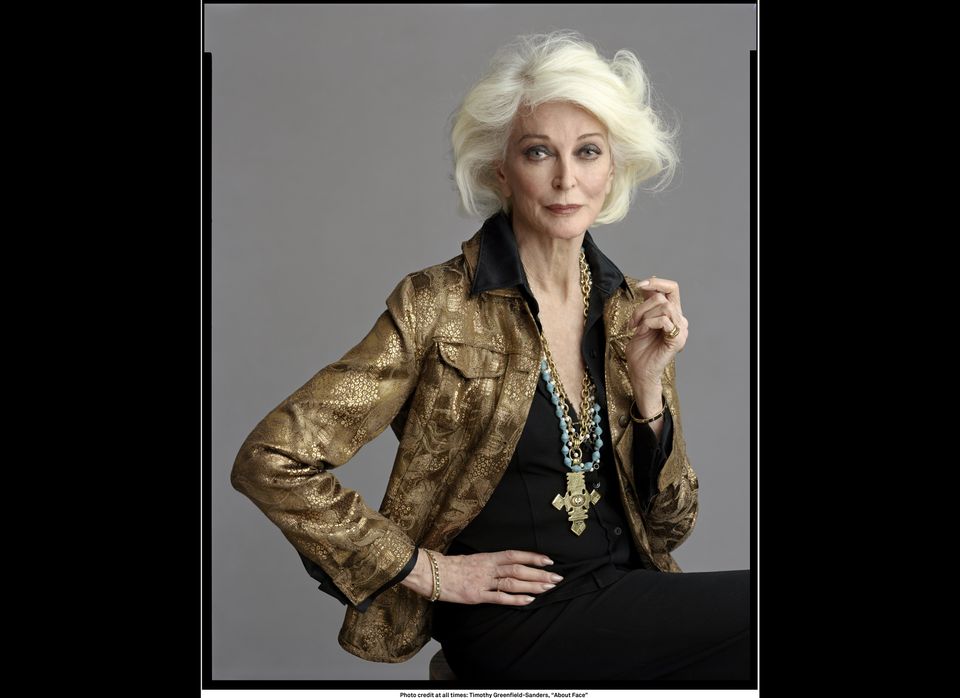