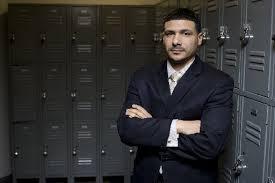 Steve Perry is opening a charter school in Harlem, and rapper Sean "Puff Daddy" Combs is a partner in the venture.

It seems that Perry initially tried to discourage Combs from opening a school- and from trying to do so as a partner with Perry. As the March 28, 2016, Los Angeles Times reports:

As Perry recalls, Combs stopped him as he was leaving a mutual friend's engagement party about six years ago.

"He said...'No one knows this, but I've always wanted to start a school,'" Perry said. They exchanged numbers, but Perry said he wasn't interested in expanding beyond Connecticut.

For years, Perry tried to convince Combs to start a scholarship or after-school program instead. But Combs was relentless.

The founder of the Hartford school, Steve Perry, said in an interview on Monday that it was unclear what role Mr. Combs would play in the new school. Beginning in 2011, Mr. Combs recruited Mr. Perry to bring his educational model to Harlem, provided office space and quietly rallied support in the community, Mr. Perry said.

"It's important to note it was he who inspired our team to come in and expand into New York," Mr. Perry said. "It starts there, and the rest of the role will develop over time."

The school is set to open for the 2016-17 school year, with 160 students in sixth and seventh grades. School officials said it would expand one grade per year, eventually enrolling 700 students in grades six through 12. It is currently accepting applications for students and staff members.

Mr. Perry said that he initially resisted Mr. Combs's suggestion of opening another school -- suggesting an after-school program or a scholarship instead -- but that Mr. Combs was adamant.

"I think that there's a lot to be found in the fact that you have someone such as Combs, who is highly visible within our community, who has decided that his major push is going to be with our model and in education," Mr. Perry said.

In Capital Prep Harlem's 2014 charter application, Combs Enterprises is mentioned among a listing of "responsible corporate citizens" supporting the school- ironic given that in 2015, Combs faced felony charges for allegedly assaulting his son's football coach at UCLA- as the New York Times article points out in its closing:

Last year, Mr. Combs was arrested on a charge of assault with a deadly weapon -- a kettlebell -- after an altercation at the Acosta Athletic Training Complex of University of California, Los Angeles, where his son is a member of the football team. No one was seriously injured, and the charge was later dropped.

Though charges against Combs were dropped, the International Business Times reports that the altercation was caught on surveillance video, which police viewed prior to Combs' arrest. As IBT reported on June 23, 2015:

Diddy, 45, was charged with three counts of assault with a deadly weapon, one count of making terrorist threats and one count of battery after he attacked Alosi, a strength and conditioning coordinator. The coach reportedly kicked Diddy's son, Justin, out of football practice.

The music mogul went to Alosi's office at UCLA's athletic training complex to confront him after Alosi apparently embarrassed him and his son in front of the team. Justin, who is a defensive back, had apparently missed several workouts and wasn't performing up to par, sources told BRO.

Diddy went to talk to Alosi after the coach refused to give Justin the celebrity treatment. "I don't care if your dad's here. This is UCLA. I'm going to treat you just like I treat everyone else," the coach reportedly said, according to a source who spoke to TMZ.

The music mogul then became infuriated when Alosi refused to talk to him. "Sal was on the phone, and by this time, Diddy was absolutely going nuts," a source told Radar Online, "threatening that Justin would transfer to another school, and cussing up a storm. It was so inappropriate. Sal told Justin to get his dad out of the building, and that is when Diddy lunged at Sal."

The argument escalated and eventually Diddy swung a kettlebell, a ball-shaped metal weight with a handle, at the coach. Alosi was left with scratches and a ripped shirt, BRO reported. Things eventually cooled down, but after police watched the surveillance video, they arrested Diddy, the news site added.

Still, Combs was not charged and instead faced possible anger management classes, as noted in the September 10, 2015, Los Angeles Times:

Rapper Sean Combs could be required to attend anger management classes in connection with his arrest at UCLA earlier this year during an altercation with one of his son's football coaches.

UCLA police accused Combs in June of several serious crimes, including assault with a deadly weapon, making criminal threats and battery, after he allegedly swung a kettle-bell weight during a confrontation at a UCLA gym.

But county prosecutors chose not to file felony charges.

Law enforcement sources familiar with the investigation said the decision was based in part on the fact that Combs waved the kettle bell at several people in the gym and that no one was seriously injured. The sources spoke on the condition of anonymity because they were not authorized to discuss the matter.

I am no fan of Steve Perry, who apparently has his own anger issues, which he has revealed on Twitter, as the November 21, 2013, Washington Post notes:

The only way to lose a fight is to stop fighting. All this did was piss me off. It's so on. Strap up, there will be head injuries.

That's not a tweet that any school principal or teacher who I know could publish and keep their job, but for Steve Perry, the out-there founder and principal of the public Capital Preparatory Magnet School in Hartford, Conn., it was just another day on Twitter. ...

The tweet above was one in a fusillade that Perry unleashed after the majority of the Hartford Board of Education on Tuesday rejected a deal, supported by Hartford Mayor Pedro Segarra and the school board's chairman, Matt Poland, to allow Perry to stop being a public employee and run the public school, along with a second school, through a nonprofit charter management company that he founded and for which he serves as president. The Courant reported that Perry is listed in state corporation records as president of Capital Preparatory Schools Inc., registered in February 2012. The organization is also listed on Guidestar, an online information service specializing in nonprofit organization, as being at the same address in Hartford as Capital Preparatory Magnet School.

Still, it seems to me that Perry hesitates to be tied to Combs in a school venture. But Combs is apparently all in, and at least in the March 29, 2016, USA Today, Perry represents himself as "pleased" to open Capital Prep with Combs- who is featured in the USA Today article title, "Sean 'Diddy' Combs to Open Charter School in Harlem."

The title does not mention Steve Perry, nor does it capture the reality that according to the Capital Prep application, Sean Combs is not listed as an applicant (Steve Perry and Vincent Morgan are the applicants). In fact, Sean Combs is not specified in any role related to the school, and Combs Enterprises is not listed as the partner organization to Perry's Capital Prep. The partner organization is Boys and Girls Club of Harlem.

Combs, who is featured in the USA Today title, is actually a man behind the scenes, which Perry acknowledges. From the article:

The rapper and mogul, a Harlem native, approached Capital Preparatory Schools in 2011 with the idea of opening a school in his hometown, with the goal of "[expanding] educational opportunities for young men and women in Harlem and [building] leaders from the community," according to a release. Over the next five years, Combs worked with the founder of Capital Prep, Dr. Steve Perry, "to build community support and enlist a team of educators, parents and business leaders to bring the idea to fruition." ...

"I'm inspired by Sean Combs' belief that educating our young people is the key to opening up a world of opportunity for them," Dr. Perry said in the release. "Sean and I have spent many long hours over the last five years talking about education and how best to meet the needs of the young people of Harlem, and I couldn't be more pleased to continue this journey through the opening of the school."

The USA Today article does not capture the apparent relentlessness in Combs' pursuit of Perry to open Capital Prep Harlem, which is also not apparent in the charter application. And again, I am back to wondering just how willing a partnership this is for Steve Perry.

But a partnership it is, nonetheless.

Combs needs to consider what type of education he is modeling in both his song lyrics (which I address in this post) and his temper. And there is Perry with his own tweeted verbal unleashings.

Capitol Prep Harlem will find out soon enough just how active and visible a role Combs will assume- and how the publicized Perry-Combs partnership will play out for these two men who both put their anger on public display.