Many viewers to the Vice Presidential Debate felt the camera angles were awful. While viewers might not have been able to know exactly what bothered them, they were right. Some of the camera angles violated a basic rule of television and distracted attention away from the candidates words.

Very often during the debate, Sen. Tim Kaine, on the left both on stage and in the split-screen effect, was seen looking off to the left side of the screen in a very uncomfortable angle as he looked at the moderator Elaine Quijano.

However, if a subject on one side of the frame is seen talking to the "short side", or the side that they are already on, then it creates a tense, unnatural, and awkward feeling to viewers. 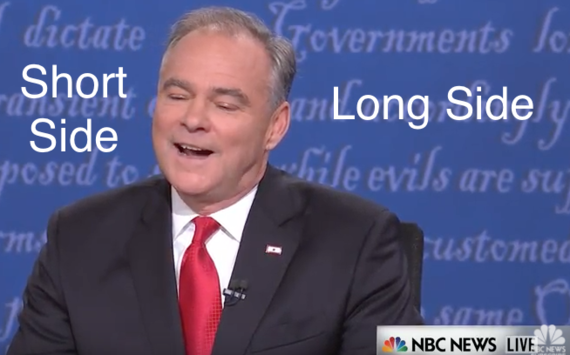 At times, Gov. Mike Pence, on the right in the split-screen, was seen looking off awkwardly to the right as well. 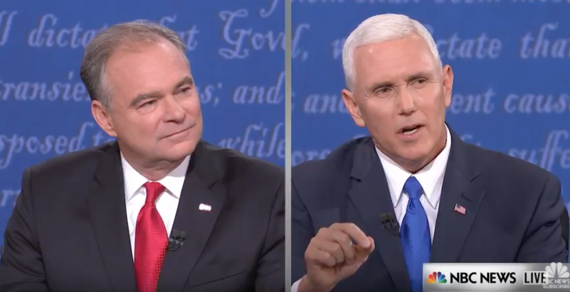 And there were times when both candidates were looking at the moderator. but towards that awkward "short side" of the split-screen.

It might have looked more natural and pleasing if the director switched locations and put Kaine on the right and Pence on the left, so they were both talking to the "long side" like this:

By my rough estimate, Kaine was in this uncomfortable shot much more often than Pence. And that likely contributed to a negative impression some had on Kaine's performance.

The debate wasn't fixed to make Kaine look bad. But poor planning caused one candidate to look worse than the other because Kaine looked at the moderator much more than his opponent.

As you can see, both candidates sat around a table with Quijano. 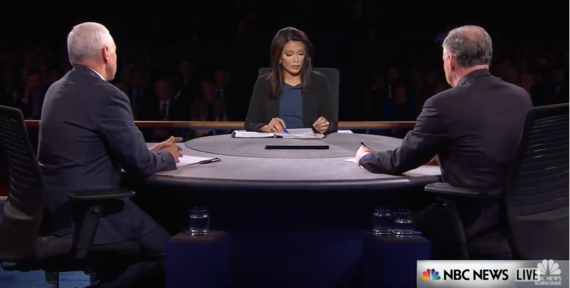 This setup was different from the first Presidential Debate where the moderator was positioned farther out in from of the candidates on their podiums and this problem didn't come up.

In the VP debate, the camera locations worked great as long as the two candidates were addressing each other directly.

In that shot, each candidate is looking at the other, both on the stage and in the split screen effect. And they are both looking toward the "long side" of the screen.

When setting up the shots, it's very possible the production staff assumed the candidates would engage directly with each other more often than the moderator.

But that turned out to be a bad assumption and the result was an awkward tension created by the camera setup.

A smart campaign advance team might have noticed this during a rehearsal and warned the candidate about it. But it appears that didn't happen.

In this case, the television production failed because the focus of the debates should be on the candidates not the camera angles of the candidates.